NASHVILLE, Tenn. (CNS) — Catholic families in the Diocese of Nashville were affected by World War II like every family in the country.

They fought on the front lines and in the air. They worked in factories producing materiel for the war effort. They lived with rationing of a host of products, including meat and sugar, rubber and steel. They anxiously awaited word about their sons, brothers and fathers fighting half a world away. They prayed for peace.

“There was no household in the country that somehow was not involved” in the war effort; they all knew someone who was in the service or who had died in combat, said Msgr. Owen Campion, a Nashville native and historian of the diocese.

They welcomed news of the end of the war with joy and relief. Emperor Hirohito announced Aug. 15, 1945, that Japan would surrender. He formally signed the surrender Sept. 2, 1945.

Four years of sacrifices, worry, battlefield horrors and millions of lives lost had finally come to an end.

James Cornelius “Connie” Summers, a Naval aviator and a 1939 graduate of Father Ryan High School in Nashville, was on the South Pacific island of Saipan when the war ended, preparing for the planned invasion of Japan.

“We were happy as can be,” Summers, 99, said of the reaction to the end of the war. The invasion of Japan “was going to be horrible,” he said. “They took no prisoners. If they captured you, you were dead.” 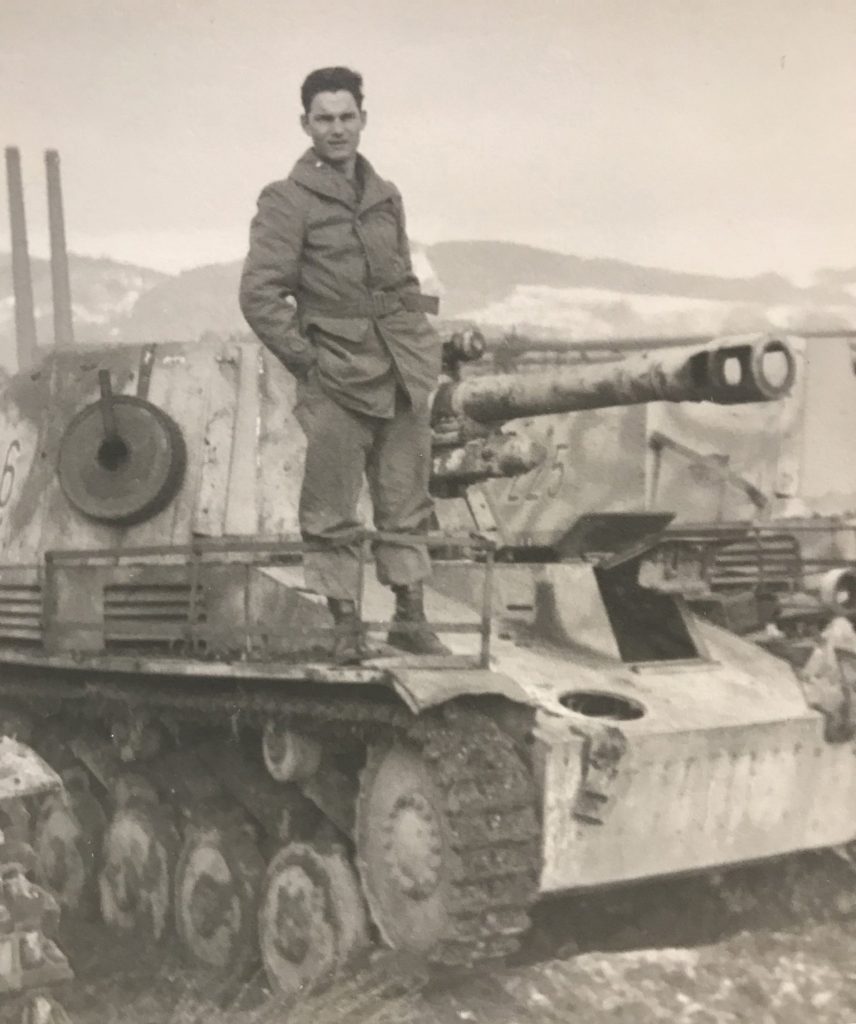 John Burns, a 1944 graduate of Father Ryan High School in Nashville, Tenn., stands on a tank in Paris in this 1945 photo. While with the 83rd Infantry Division in Europe, he and his twin brother, Bob, served together as a bazooka team during the final push into Germany. After the war, they operated the Burns Brothers Farm in Triune, Tenn. (CNS photo/courtesy John Burns via Tennessee Register)

After serving in Europe as part of the final push into Germany, John Burns and his twin brother, Bob, were at Camp Campbell, as it was called then, on the Tennessee-Kentucky state line training for the invasion of Japan when the war came to a close.

“It was a relief,” said Burns, a 1944 graduate of Father Ryan High. “Seeing what we saw, we were getting ready to go back into the same thing.” 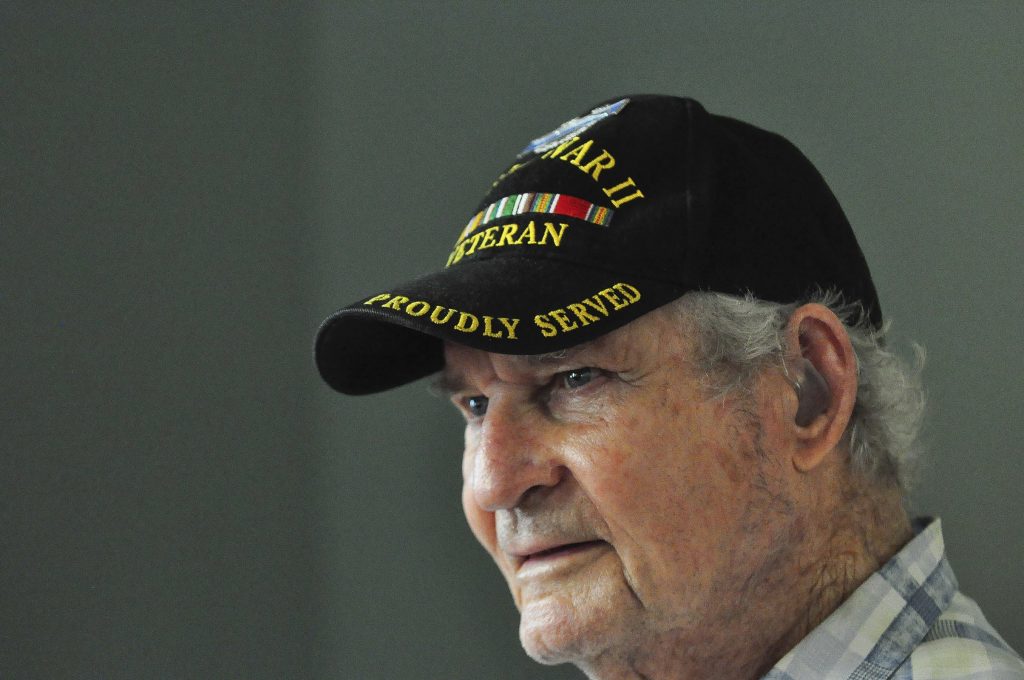 John Burns of Nashville, Tenn., is seen in this undated photo. The 94-year-old served in the armed forces during World War II, which came to an official end with the surrender of Japan on Sept. 2, 1945. Burns served in the 83rd Infantry Division during the final push into Germany. He was 19 when the war ended. (CNS photo/Andy Telli, Tennessee Register)

In April 1942, Summers, who was working for the telephone company when the war started, headed to the recruiting station to enlist, hoping to be assigned to a construction unit to take advantage of his work experience.

But a recruiter stopped him on his way in and asked if would consider becoming a Naval aviator. Summers knew that required two years of college, and he hadn’t spent any time in college.

The recruiter told him not to worry about that. If he passed the test, the Navy would send him to college while they trained him to fly planes.

Summers passed the test but had one more obstacle. At his physical examination, the doctor discovered he had flat feet. “You’d be 4F (physically unfit to serve) if you were in the Army,” the doctor told him. “If you’re going to be a pilot, they’ll never check your feet again, so I’ll pass you.”

In the Navy, you weren’t a pilot, you were a naval aviator, Summers explained. “A naval aviator learned to be an aviator, bombardier and a navigator,” he told the Tennessee Register, Nashville’s diocesan newspaper.

“I got my wings in June 1944, and shipped out for the Pacific Theater, assigned to the crew of PBM patrol bomber, a large seaplane with a crew of eight enlisted men and three officers, Summers said. “It was a big, big airplane.”

As one of the junior officers, Summers would alternate between serving as the co-pilot and the navigator. Based in Saipan, his crew flew missions bombing Japanese ships from Korea to Okinawa, with several close calls along the way.

At the end of one mission, Summers’ plane ran out of fuel and had to land on the open sea, “which is not fun,” he said. The plane landed near a convoy of five American ships. While Summers and his crew stood on the wing of their plane and watched, 100 or more Japanese planes armed with 500-pound bombs swooped down on the convoy. “We watched them sink all five of the ships,” Summers said.

One of the Japanese planes headed toward Summers and his crewmates. “We all jumped in the water,” he said, and from there they watched an American fighter pilot swoop in at the last moment and shoot down the Japanese plane before it could drop its bomb.

Burns was a senior at Father Ryan High in 1944, the captain of the football team.

“When I was in high school, when you would go to a football game, hardly anybody was there,” recalled Burns, now 94. All of the men were either in the service or busy working a job to support the war effort, he said.

On their 18th birthday in February 1944, he and his twin brother received a letter directing them to report to Camp Forrest in Tullahoma, Tennessee, for a physical. They were able to complete their senior year before reporting for duty in August of that year.

On Jan. 30, 1945, they shipped out from New York to join the war effort in Europe. They eventually ended up in Aachen, Germany, to join the 83rd Infantry Division, which had been decimated during the Battle of the Bulge, Burns said. “They had lost all kinds of people.”

The Burns brothers were tapped to be a bazooka team and saw combat as the Allied Forces made the final push into Germany.

“The Germans would be surrendering like crazy,” Burns said. “They were hungry. They wanted something to eat.”

When the American soldiers would enter a village, they would be met by a woman with four or five children or a priest telling the Americans that the German soldiers had all left, Burns said. “They didn’t want the town torn up.”

Burns’ company was in Austria when Germany surrendered May 7, 1945. He and his brother had been separated at the time, and Burns promised God he would never miss Mass if he could be reunited with his twin. It’s a promise he has kept for 75 years and counting. 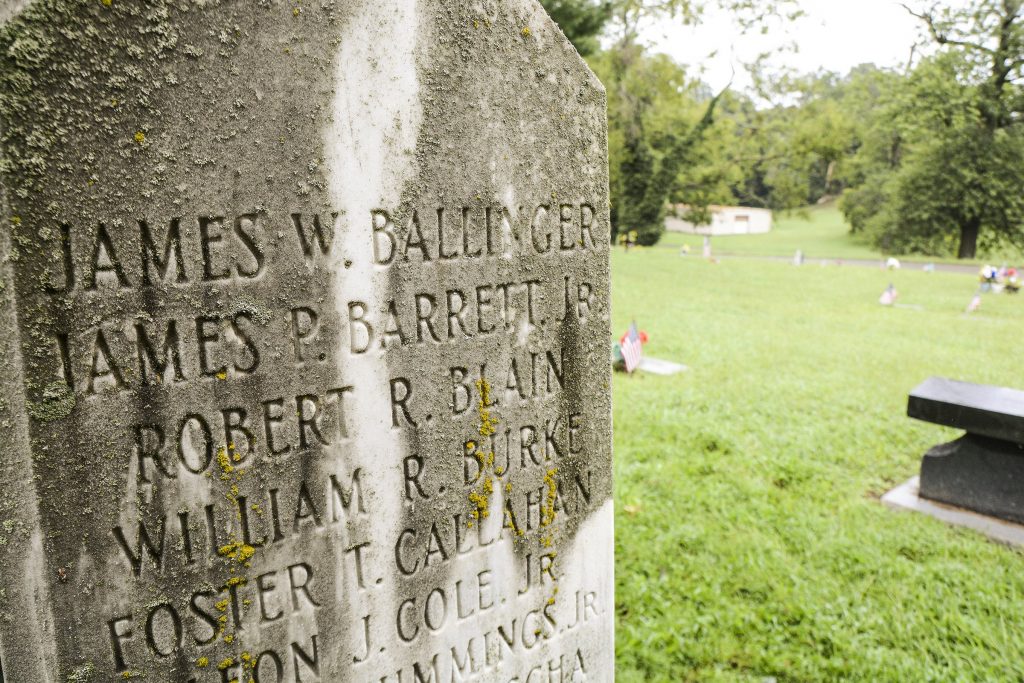 The names of Catholic World War II soldiers are seen on a memorial at Calvary Cemetery in Nashville, Tenn., in this undated photo. “For those who died for God and Country in World War II. In your charity pray for the repose of their souls” are the words engraved on the front of the memorial. (CNS photo/Andy Telli, Tennessee Register)

After the war, life slowly returned to normal.

Growth in the Nashville diocese was put on hold during the war but resumed in the postwar years. That growth included a surge in vocations to the priesthood among World War II veterans.

“There was quite a surge of priests who had been in the military,” Msgr. Campion said. “That was not only in Nashville, but that was around the country.”

Burns was at Camp Campbell at the end of the war when he met four or five of his friends from Father Ryan High who were playing football for what is now Austin Peay State University in Clarksville. He joined them at Austin Peay before finally returning to his family’s farm in Nashville.

Eventually, he and his brother bought a larger farm in the Triune, Tennessee, community; his family still owns the farm. Burns is a parishioner at Holy Family Church in Brentwood, Tennessee, but every Wednesday he and his family attend Mass together at St. Patrick Church in Nashville, where he grew up.

“That’s all thanks to Dad,” said Burns’ daughter Teresa Creecy. “On Monday, he’ll give us a call, ‘Are you going to be at Mass?’”

After the war, Summers enrolled at Vanderbilt University on the GI Bill, but was still unsure what he wanted to do with the rest of his life. “I had no idea what I wanted to do,” Summers said. “I knew I didn’t want to fly airplanes.”

A professor suggested he consider law school, and with just enough money left for college, he enrolled in Vanderbilt Law School in 1947 and graduated in 1950. He went on to have a distinguished career as an attorney and public servant.

Summers served as a hearing examiner for the Tennessee Supreme Court’s Board of Professional Responsibilities, president of the Young Lawyers’ Association of Nashville, and on the board of the Nashville Bar Association.

Gov. Frank Clement, who served from 1953 to 1959, appointed him as chair of the Governor’s Advisory Committee for the Establishment of Community Health Centers in Tennessee, which helped establish more than 30 centers across the state.

A parishioner at St. Henry Church, Summers served on the boards of Catholic Charities of Tennessee and St. Mary’s Child Development Center.

Summers summed up his experiences: “I’ve been lucky all my life.”

Telli is managing editor of the Tennessee Register, newspaper of the Diocese of Nashville.