“The mystic chords of memory, stretching from every battlefield and patriot grave to every living heart and hearthstone all over this broad land, will yet swell the chorus of the Union, when again touched, as surely they will be, by the better angels of our nature.”

The inception of Memorial Day goes back to the bloodiest conflict in U.S. history, when Americans slaughtered their countrymen by the thousands in single-day battles – the Civil War. Even prior to the end of the war, civilians – particularly women – in both the north and the south began decorating gravesites in honor of those lost in the deadliest days the nation has ever seen.

In the years following, numerous cities on both sides of the conflict began holding “Decoration Day” services at various times throughout the year, honoring military servicemen from any war. This gradually came to be called Memorial Day. These celebrations eventually merged into a nationally recognized holiday falling on May 30, before being codified into law in 1968 to fall on the last Monday of May.

People still uphold this practice of remembering and praying for loved ones who have passed away.

Miller and his staff are dedicated to presenting beautiful, immaculate grounds when families come out to honor their departed loved ones. They provide flags at both entrances to the cemetery for families to place at the gravesites of veterans, but Miller stated that “Memorial Day – it’s for everyone who’s departed – military, nonmilitary, moms, dads, children.” 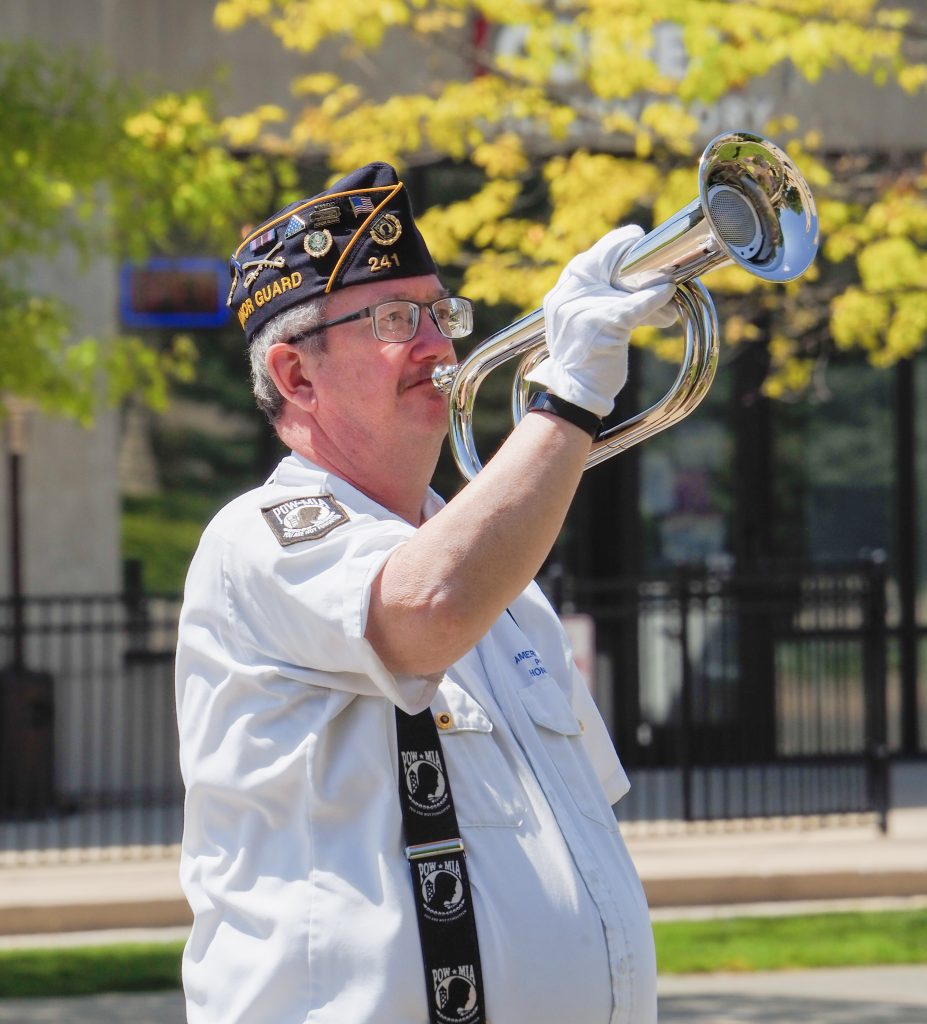 Memorial Day is a time to remember and pray for the servicemen and women who died in the line of duty. The holiday has deep roots in Christianity. The honor guard from American Legion Post 241 in Fort Wayne renders military honors for a veteran at a funeral at the Cathedral of the Immaculate Conception.

Typically, Memorial Day is intended as a time to honor those soldiers who have made the ultimate sacrifice for their country, though any veteran who served in a military branch for at least two years is eligible for military burial.

When a veteran’s family makes funeral arrangements for their loved one at Divine Mercy, Miller’s team provides military honors for that person. “We’ve arranged all that; that’s a burden we take off the family. … The whole experience is to make it as comforting and easy for the family as possible, given the circumstances they’re going through.”

The honor guard he usually contacts is the American Legion Post 241 in Fort Wayne. John Smeltzer is the honor guard director for the post, and it is his duty to set up the veteran-comprised guard for each military funeral that they are called to serve. “I love what I do. We feel it’s our duty to do that for fallen veterans.”

Some honor guards will only serve certain branches of the service, but Smeltzer is proud that his post will honor any veteran with the proper respect and formality due to them. “We are there for the veteran.”

He explained the different aspects of the somber ceremony. The honor guard itself is “a team of eight people: the commander, chaplain, bugler, rifle commander and four riflemen” who carry M1-A1 carbines, the weapon typically used by soldiers in World War II and the Korean War.

After the commander gives a dissertation on the veteran’s time in service and the chaplain recites a prayer over him or her, the commander issues the call for the riflemen to render a three-volley salute. Then the flag that has draped the servicemember’s coffin is folded and presented to the closest family member with the words: “On behalf of the President of the United States, (service branch), and a grateful nation, please accept this flag as a symbol of our appreciation for your loved one’s honorable and faithful service.” The family is presented with a ceremonial brass shell casing.

This is probably the most emotional part for families. Smeltzer remarked, “Some people break down, others are pretty stoic.”

Miller has also witnessed many such military funerals and the reactions of families. He said, “What I find is it’s different for older people versus younger people. For older people that have lived through wars … there’s a certain respect when it comes to the honor guard or the military service that you recognize the sacrifice that that individual made of their early life to serve and protect our freedoms. 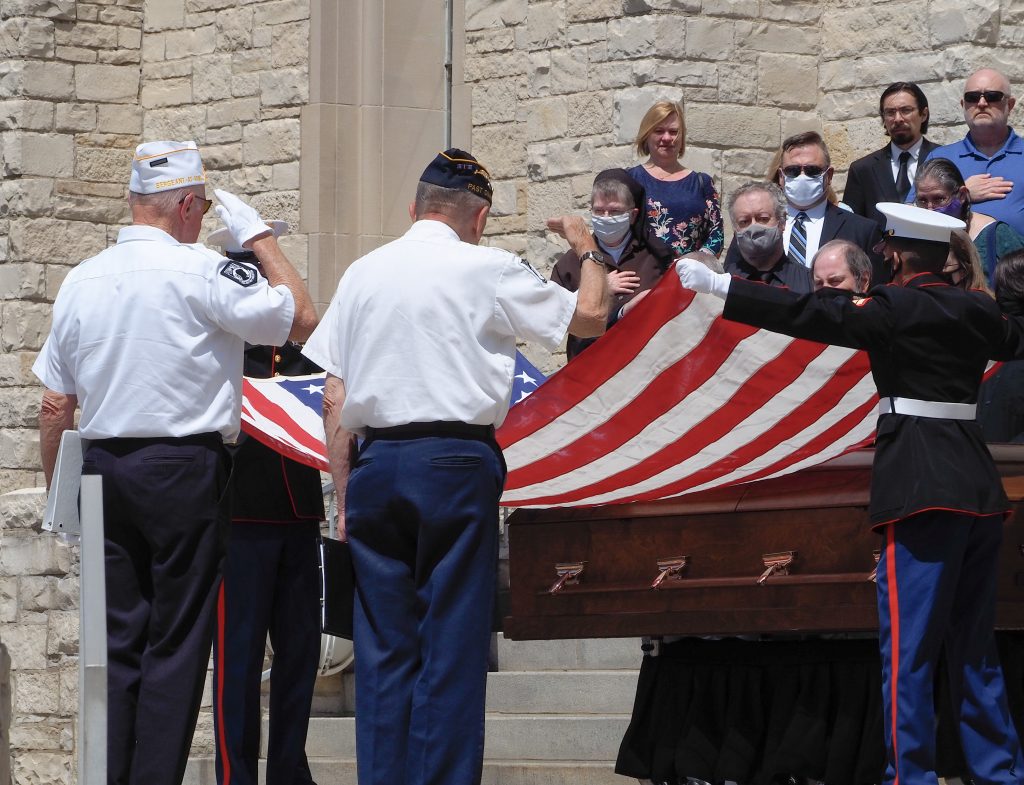 “Younger people, however, I find that it’s a learning experience – and a good one, at that.” He described that younger generations “see the folding of the flag and hear taps being played and it drives home the sacrifices that they haven’t experienced or seen firsthand … and it brings home that that person gave up two years plus of their life for our freedoms and we better protect it, and we better show respect for that individual.”

Mae Leedy, parishioner at SS. Peter and Paul in Huntington, reminisced on the funeral of her husband, James, 20 years ago. He had served stateside in the Air Force from World War II until his retirement from the 122nd Air National Guard in 1984.

“I think military funerals are very, very special,” Leedy stated. “Those people in the military are very dedicated, even if they’re drafted. And just for myself, I’m a very military person.”

Indeed, the nonagenarian’s many years have been shaped by the military lifestyle. Her father served during World War I and all four of her sons joined the Air Force, so she understands the commitment and sacrifices of service members and their families. She even remembers seeing Civil War veterans at church in her younger years. Due to her husband’s long military career, Leedy and her family have coped with moves, living out of suitcases and separations from loved ones.

She remembers with great poignancy the military elements of James’ funeral, particularly the flag presentation. “I felt honored … just the ceremony part of it was very meaningful, you’d say.” 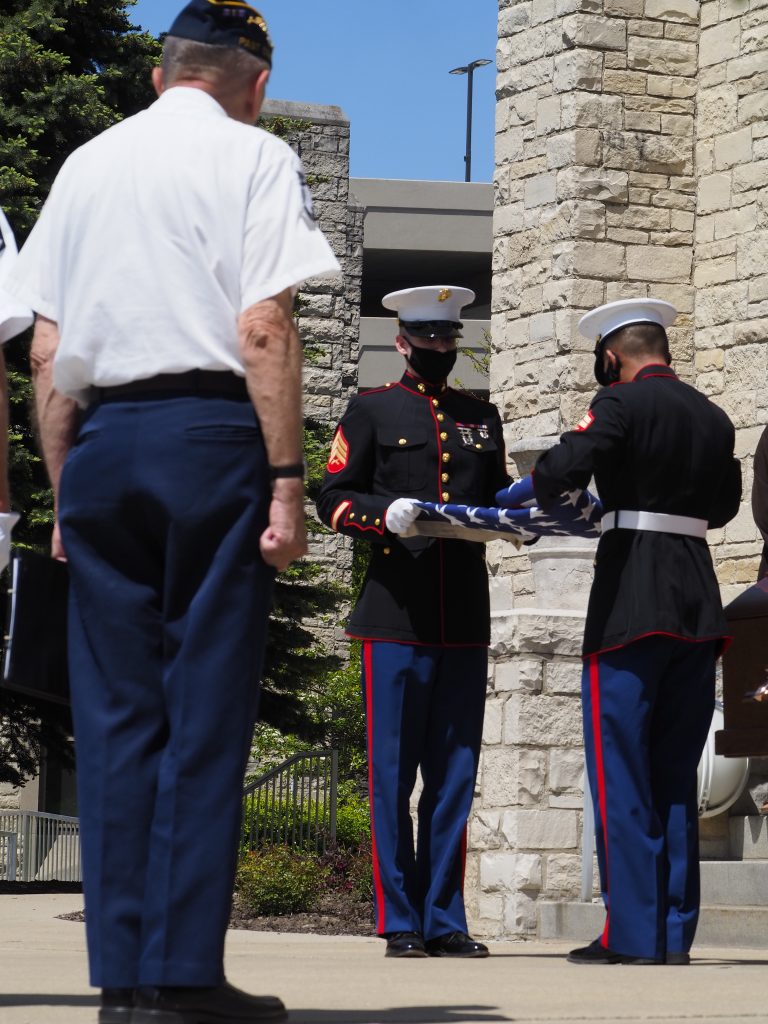 There is much fanfare over the folding of the American flag at a military funeral. Everything about it has meaning, from its triangular shape to the crisp, solemn way it is folded.

As Smeltzer said, there are always 13 folds, which naturally symbolize the original 13 colonies, but the significance does not end there. Laurie Pearson of Military.com gave a thorough explanation of what each fold means. The Christian principles held so deeply in the country’s founding permeate each of them.

The first fold means life. Number two symbolizes the belief in eternal life, which is particularly significant at a Catholic funeral, as Catholics profess this belief every time the Apostles’ Creed or Nicene Creed is professed. The third fold honors the departing member and the sacrifice of time that he or she served in the U.S. military.

The fourth fold speaks deeply to Christians in that it “represents our weaker nature; as American citizens trusting in God, it is Him we turn to in times of peace, as well as in times of war, for His divine guidance,” according to Pearson.

The eighth fold serves two purposes: as a tribute to the deceased person, that he or she will inherit eternal life, and to honor the person’s mother. Nine symbolizes womanhood and how women have molded those who serve the nation. Similarly, the 10th fold is a tribute to fathers who also give their children for the country’s defense.

“The 11th fold,” Pearson states, “represents the lower portion of the seal of King David and King Solomon and glorifies the God of Abraham, Isaac and Jacob.” The 12th fold is an emblem of eternity, glorifying the Holy Trinity. And the 13th fold calls to mind the nation’s motto: “In God We Trust.”

The result of the folded flag is a triangle, with only the blue field of stars showing, and the shape represents the tricorn hats worn in the American Revolution.

It may be the most hauntingly beautiful melody known to most Americans. The 24-note salute calls to mind the sacrifice of hundreds of thousands of service members killed in military combat through the nation’s 245-year history.

There are several legends as to where the mournful tune originated, but its actual history is a bit less moving than the myths. During the Civil War, Union Gen. Dan Butterfield, known for creating distinctive bugle calls for his brigade, arranged taps as a “lights out” signal. It was first used as a dirge for a military funeral in 1862 and the practice quickly spread across both sides of the conflict and continues to this day.

In Arlington National Cemetery, taps is played at the Tomb of the Unknown Soldier yearly during the military wreath ceremony on Memorial Day. It is still played for lights out at military basic training and sometimes on military bases that retain the practice of playing reveille, retreat/to the colors and taps at specified times of day. Protocol calls for all who are on base to follow for the playing of the first two: They coincide with the raising and lowering of the American flag at sunrise and sunset. Taps is played at night.

Vince LaBarbera, former director of communications for the Diocese of Fort Wayne-South Bend, is a member of a group called Buglers Across America. Founded in 2000, Buglers Across America’s purpose is to honor every fallen veteran with the proper ceremony due to him or her by having an in-person bugler at funerals.

In an article for the Waynedale News, LaBarbera explained how he began playing military bugle calls. He was a student at Central Catholic High School in Fort Wayne in the 1950s when he began playing taps for funerals. As a member of the school band, the school’s principal at the time, Msgr. William Lester, requested that LaBarbera play reveille over the morning announcements.

“As part of the privilege of sitting first chair in the trumpet section, it was my honor to often play taps at the burial of a military service veteran.” He told of how an American Legion honor guard would drive him to various cemeteries, where he would play the melody, then return him to school. “Not only was it an honor, of course, but I was thrilled to get out of classes for a couple of hours,” he joked.

Speaking to Today’s Catholic, LaBarbera stated that, “A new tradition was begun last year on Memorial Day – and I hope it continues this year – for buglers to play taps at 3 p.m. nationwide. I plan to do that in front of our house.”

“With malice toward none; with charity for all; with firmness in the right, as God gives us to see the right, let us strive on to finish the work we are in; to bind up the nation’s wounds; to care for him who shall have borne the battle, and for his widow, and his orphan – to do all which may achieve and cherish, a just and a lasting peace, among ourselves, and with all nations.”