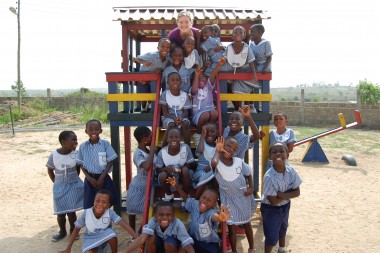 Megan Ryan poses atop playground equipment on the “playing ground,” with the second graders she taught at Our Lady of Holy Cross Grade School in Ghana.

FORT WAYNE — Megan Ryan sees life in a much different light than she did a little over a year ago. And that’s no surprise after her experience serving in Ghana, West Africa.

Ryan, a 22-year-old spirited 2009 graduate of Saint Mary’s College had felt a calling toward service beginning in her junior year. After meeting with fellow classmate Katie Yohe, the two collaborated with Saint Mary’s College’s Office of Civil and Social Engagement and the Congregation of the Sisters of the Holy Cross to assist in their academic efforts in Africa.

This unprecedented postgraduate pilot program had Ryan and her cohort blazing trails of service that they would not soon forget. “It was blind bliss,” says Ryan of the initial experience. “But not knowing made it even better.”

Our Lady of Holy Cross Grade School, located in Kasoa, Ghana, West Africa, was in its third year of operation when Ryan and Yohe arrived in August of 2009. Ryan admits she had to “let go” of everything she was accustomed to in the U.S. “My No. 1 lesson was in complete patience.” The Ghanian culture moves slowly, with events rarely occurring on time. “They are in survival mode there. It was a refreshing difference,” says Ryan.

The young women lived with the sisters in their convent on a compound that included the school building. “What I loved was the community living (in the convent). It was interesting … so peaceful. There was a great spiritual support network,” recalls Ryan.
Ryan and Yohe earned a small stipend while they taught grade school for three three-month terms. Close to 75 percent of the students, grades kindergarten through third grade, attended the school on scholarship or by bartering services. Ryan taught second-grade religion and morals education, math, science, reading and more. Each lesson and all materials were “self created,” Ryan says.

She also helped educate the other teachers, many of whom had not been professionally trained, by offering workshops. “We offered preliteracy, classroom management and phonics,” says Ryan, adding a main goal was to eliminate rote memorization and corporal punishment within the established classrooms.

Though English is the country’s declared language, in Ghana there are 49 tribal dialects. Ryan’s students spoke two, Twi and Fanti, both of which she spoke only a little. But the language barrier did not dampen her passion for teaching the students and by the end of her stay the students were speaking conversational English.

One of the struggles Ryan faced daily was witnessing the poverty the children endured. “We wanted to change things and had the feeling we weren’t doing any good. Then I realized… We can’t focus on all the suffering, but we can focus on what we can change,” she says.
Another struggle was with her faith and spirituality, and religion. “I never realized how religion is tied to the culture and place you are,” says Ryan, who recalled Masses lasting five hours due to the social aspect of the poverty- stricken area. “Spirituality is more personal and a deeply rooted thing,” she says, content with her new understanding.

When asked what inspired her most during her stay Ryan responds smiling, “My best friend, Jemilla. She was a light for me the entire time there. She was my shadow.” Jemilla is the four-year-old daughter of the cook employed by the convent. Though little Jemilla and Ryan are worlds apart culturally, ethnically and in age, the bond between them has grown unbreakable.

Returning to the U.S. in July of 2010 had Ryan and Yohe attending a closing retreat in South Bend. Meeting the two newest graduates who would be replacing them in the little school in Ghana was a delight for Ryan. “We want to provide support to the girls there now,” she said. She and Yohe will reflect and provide input to the college, who has officially sanctioned the program as an postgraduate service program, to continue the adjustments needed to polish it.

Adjusting to life in the U.S. has been a challenge says the Saint Mary’s graduate. Where once she was, by her own admission, “constantly overcommitted and stressed,” she finds she has taken on the slow moving nature of the Ghana culture. “I’m a homebody now,” she says smiling. “I’m low key now, where I never had been before.”

Ryan has taken a position at Imagine Master Academy in Fort Wayne teaching fifth grade. “It’s a bit overwhelming,” she admits, but adds she’s being gentle with herself in this transition process. And she has come home to St. John the Baptist Parish where she has found peace in her music and cantoring.

Future plans for this servant include using her teaching skills overseas once again with the ultimate goal of living interculturally with soon-to-be-husband Adam, either overseas or right here in the U.S.

As she reflects on her time in Ghana, Ryan smiles. “It’s carved a little place for itself in my heart. It might get smaller but its not going to go away,” she says, adding, “God will give you what you need when you need it, not when I want it. It’s all about letting go.”