HAL FAR, Malta (CNS) – Saying civilization itself risks foundering because of apathy and selfishness, Pope Francis insisted that migrants and refugees must be treated with care and kindness and recognized as brothers and sisters.

In the shipwrecks that lead to thousands of migrants drowning in the Mediterranean each year, “we see another kind of shipwreck taking place: the shipwreck of civilization, which threatens not only migrants but us all,” the pope said on April 3 at a meeting with about 200 migrants at the John XXIII Peace Lab in Hal Far.

Imagine, he said, “that those same people we see on crowded boats or adrift in the sea, on our televisions or in the newspapers, could be any one of us, or our sons or daughters.

“Perhaps at this very moment, while we are here, there are boats heading northward across the sea,” he said. “Let us pray for these brothers and sisters of ours who risk their lives at sea in search of hope.”

The day before the meeting, the pope said, there was the report of a rescue of four migrants off the coast of Libya. More than 90 people were reportedly on the boat; only four did not drown. 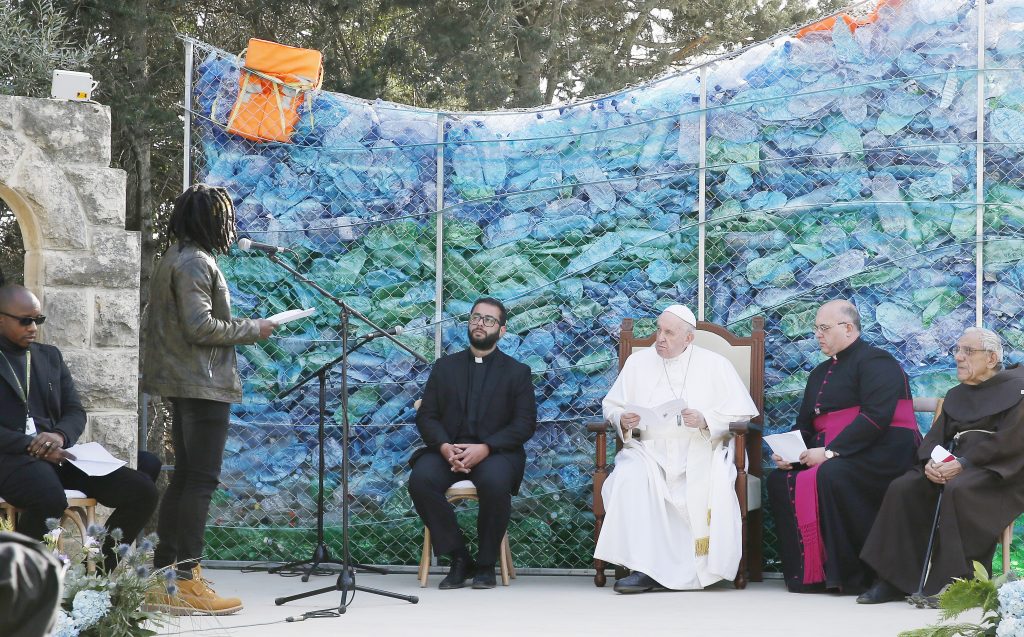 Pope Francis meets with migrants at the John XXIII Peace Lab’s Center for Migrants in Hal Far, Malta, April 3, 2022. The backdrop was built with plastic bottles and life vests pulled from the sea. (CNS photo/Paul Haring)

Pope Francis sat against a shimmering backdrop of shades of blue topped with blobs of florescent orange – a backdrop built with plastic bottles and life vests pulled from the sea.

Franciscan Father Dionisio Mintoff, the 91-year-old founder of the center, welcomed Pope Francis, telling him, “Your urgent appeals to be close to the weakest spur us to do better and to continue our daily mission toward those who, whether for a limited time or permanently, land on our island, to escape from misery and to have a better life.”

The pope spoke after listening to Daniel Jude Oukeguale and Siriman Coulibaly describe in harrowing detail how they finally made it to Malta.

Oukeguale said he left his home in Nigeria five years ago. “After 13 days of traveling, we arrived at the desert. While crossing, we passed dead people and animals, burned cars and a lot of empty water cans. After eight traumatic days in the desert, we made it to Libya.”

He would pay smugglers for a place on a boat, only to have the trip canceled and the money unreturned. Twice he attempted the crossing, only to be pushed back by the Libya or Tunisian coast guards and detained.

The sixth time he paid, he said, they set sail, and after three days “it was all smiles when the Maltese coast guard rescued us. I couldn’t believe my eyes! Tears of joy flowing freely. My dreams came true!

“But these were short lived since we were put in detention for six months the same night we landed. I almost lost my mind,” he said, and he wondered, “Why were men like us treating us like criminals and not like brothers?”

“When you run away from a situation of war, conflict and extreme poverty,” Coulibaly said, “you have nothing except for your determination to live a better life and a lot of courage and resilience to face all the challenges you encounter.”

Unfortunately, he said, too many individuals and governments seem to think a migrant ceases being human when he or she leaves home.

“Today we want to remind people in decision-making positions and who hold power, that human rights and dignity are universal and inherent,” he said. “We are ‘fratelli tutti” (all brothers and sisters), right?”

At the end of the meeting, Pope Francis prayed that God would “free us from fear and prejudice, enable us to share in their sufferings and to combat injustice together, for the growth of a world in which each person is respected in his or her inviolable dignity, the dignity that you, O Father, have granted us and your Son has consecrated forever.”

Located between the Italian island of Sicily and the North African coast, Malta – a tiny nation with fewer than 500,000 residents – has been the first port of call for thousands of migrants and refugees crossing the sea from North Africa in search of a better life in Europe.

Current European Union policies have left Malta and other frontline countries such as Italy, Spain and Greece, on their own to rescue, shelter, verify and try to integrate the migrants.

In his talk at the center, Pope Francis asked, “How can we save ourselves from this shipwreck which risks sinking the ship of our civilization?”

The answer, he said, is “by conducting ourselves with kindness and humanity” and by regarding people not as statistics but as “what they really are: people, men and women, brothers and sisters, each with his or her own life story.”

The Acts of the Apostles says that when St. Paul was shipwrecked on Malta, he and his fellow passengers “were treated with ‘unusual kindness.’ Not merely with kindness, but with rare humanity, a special care and concern that St. Luke wished to immortalize.

“Let us respond to the challenge of migrants and refugees with kindness and humanity,” the pope said. “Let us light fires of fraternity around which people can warm themselves, rise again and rediscover hope. Let us strengthen the fabric of social friendship and the culture of encounter, starting from places such as this.”