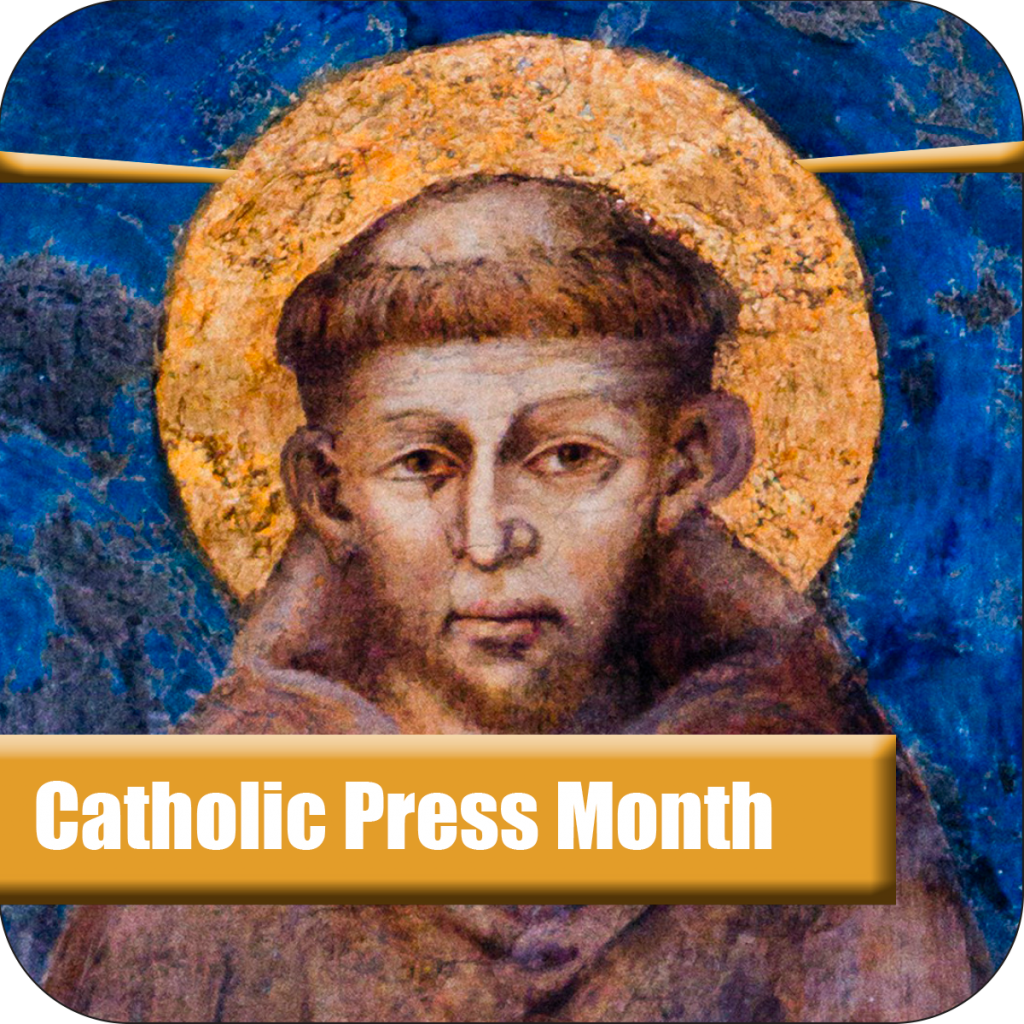 VATICAN CITY (CNS) — When Pope Francis met with a Catholic News Service delegation marking the agency’s 100th anniversary, he encouraged the agency to continue to foster dialogue and honest communication.

“We need media that can help people, especially the young, to distinguish good from evil, to develop sound judgments based on a clear and unbiased presentation of the facts, and to appreciate the importance of working for justice, social concord and respect for our common home,” he said in his written message.

At a time of increased division, U.S. Catholic journalists should promote unity in diversity that beats with “one heart” and “try to get people to talk to each other, reason together and seek the path of fraternity.”

If that sounded like marching orders for the Catholic press, there have been plenty of road maps posted along the way on how to get there.

Pope Francis, in fact, has used his whole pontificate, soon to enter its ninth year, laying out a very clear path away from the temptation to fall for the sins of disinformation, calumny, defamation and “a love of dirt” or scandal.

Analyzing every speech and message by the pope to reporters and communicators, one Catholic communications professor said he has boiled it down to following three virtues: People in the media are called to “go out,” “listen” and “care for,” said Giovanni Tridenti, a professor at Rome’s Pontifical University of the Holy Cross.

“Going out” to where the news is happening and “listening” attentively to people helps provide a picture that is closer to the truth, he said, avoiding the telephone-game chain of misreadings, filters and partial snippets of someone else’s story. 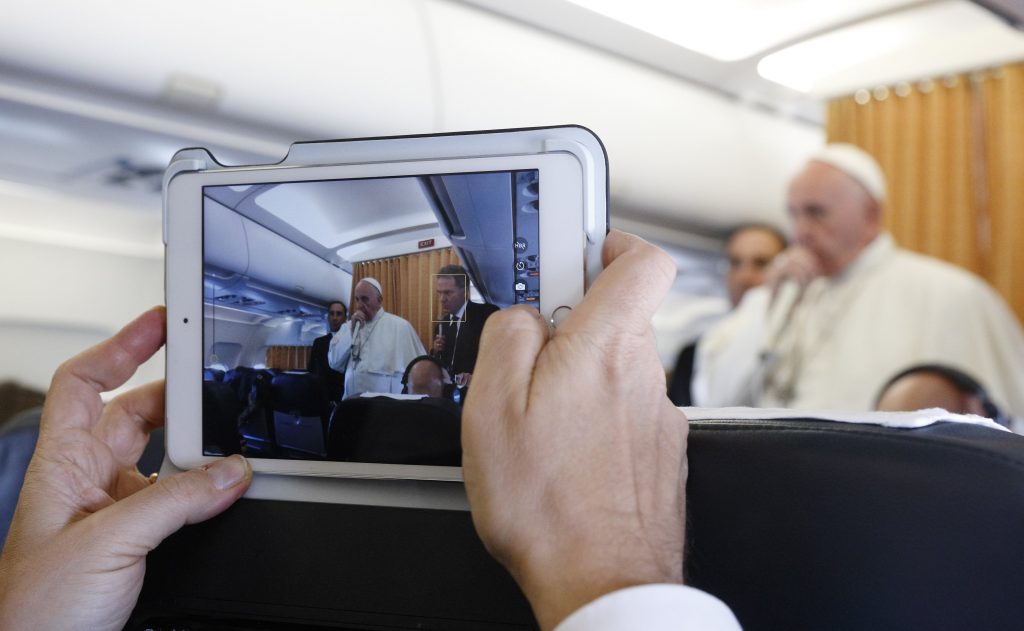 A journalist uses a tablet to photograph Pope Francis as he answers questions from journalists aboard his flight from Malmo, Sweden, to Rome in this Nov. 1, 2016, file photo. In Feb. 1 comments to Catholic News Service, Pope Francis said the world needs media that can help people distinguish good from evil and develop sound judgment based on facts. (CNS photo/Paul Haring)

When people really care about what they do and how they do it, they also bring hope, he said.

It is possible to “tell the story without pessimism — where everything is bad, it’s all a conspiracy — but I do so by using words that give hope without hiding the problems,” he said.

Giving context, showing the bigger, more complex picture and showing solutions, he added, are part of “constructive communication that fosters understanding and getting people to come together.”

The overarching guide, Tridenti said, is wanting what is best for all of humanity and rekindling joy in people’s hearts, which comes when “one goes out to repair bit by bit all the things we have slowly destroyed” in a spirit of human fraternity.

Going out to rebuild something broken echoes a similar call taken up by St. Francis of Assisi, who also has much to offer to communicators.

Franciscan Father Enzo Fortunato, a journalist and director of the monthly magazine San Francesco, which also celebrated its 100th anniversary, told CNS their founder showed “a good word is also a good action.”

The 13th-century saint went out into the world, showing respect for people and creation, and seeking to bring peace to people — both in their relations with others and within their own hearts, he said by phone from Assisi Feb. 8.

“The most beautiful story to tell in mass media is the one that begins with people’s hearts,” that is, their backstory and experiences, “their failures and successes,” he said. 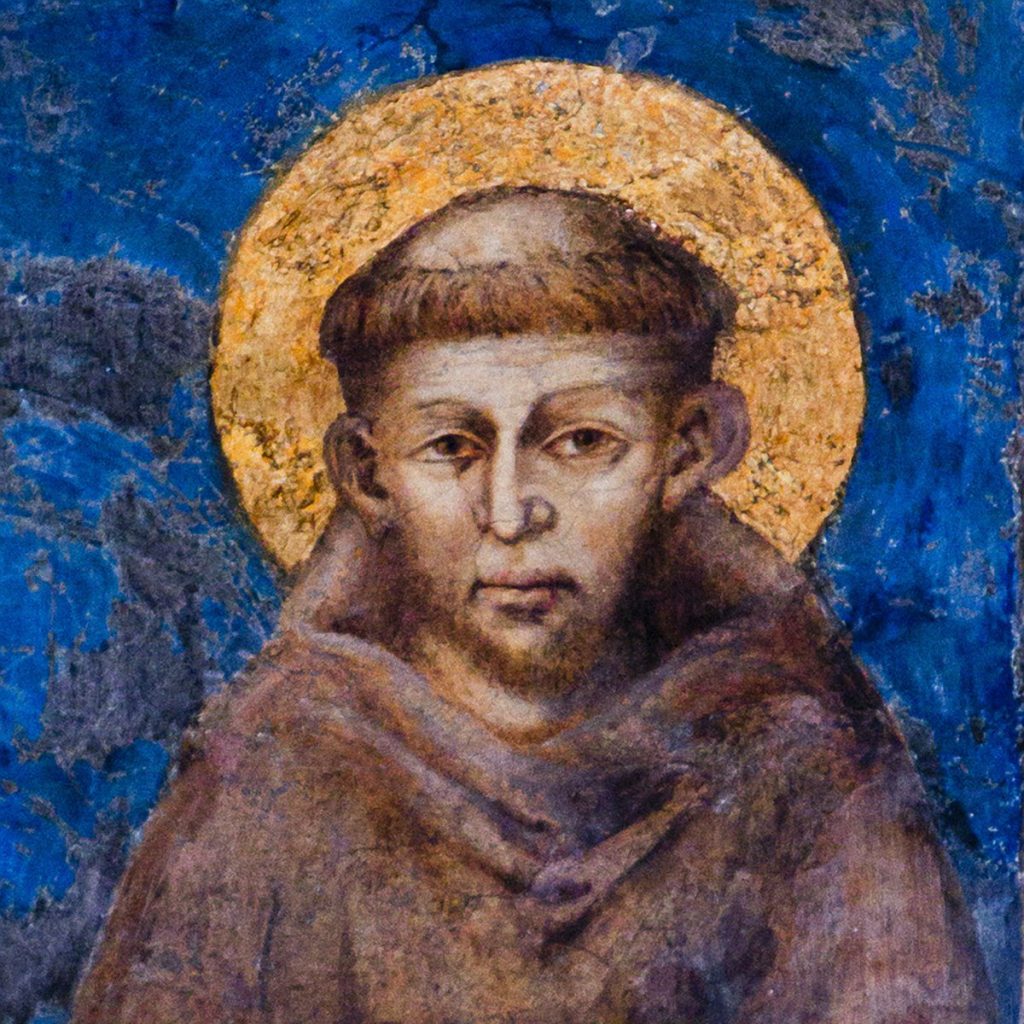 St. Francis of Assisi is depicted in this detail from a fresco in the Basilica of St. Francis in Assisi, Italy. Franciscan Father Enzo Fortunato, a journalist and director of the monthly magazine, San Francesco, said communication in the spirit of St. Francis is like a tree, whose roots are Jesus, and whose three main branches are peace, solidarity and caring for creation. (CNS photo/Octavio Duran)

Communication in the spirit of St. Francis, the friar said, is like a tree whose roots are Jesus, and whose three main branches are peace, solidarity — particularly with the poor — and caring for creation.

“These are the three facets of communications that are seen and mirrored in the three great encyclicals of this pontificate: ‘The Light of Faith,’ the faith as the light toward peace; ‘Laudato Si’’ on the importance of one’s relationship with everything that surrounds us in creation; and ‘Fratelli Tutti’ on solidarity and fraternity,” he said.

While the first encyclical helped complete a trilogy started by Pope Benedict XVI, the last two were fully in the vein of Pope Francis with direct ties to St. Francis of Assisi, his papal namesake.

Catholic media, “which has an important role to play on every level,” can also take inspiration from this saint, Father Fortunato said.

“Franciscan communication finds its strength in its ability to point out the good, to live the good and follow the good,” the priest said. Likewise, “Catholic media hinge on the good,” since the Gospel as good news is intrinsic to its mission.

“And the good is always contagious,” he said. “We need to contaminate the world with stories of goodness and beauty.”

Tridenti said this is how the Catholic press can best move forward, instead of — what sometimes happens — blaming the downfall of professional journalism on the emergence of social media content creators.

“If we take back our mission of being journalists,” he said, “we would fill a void and be that person who truly goes toward those situations” that need telling, who truly listens and tells the story in a “language of hope,” inspired by a Christian desire to do good for others.