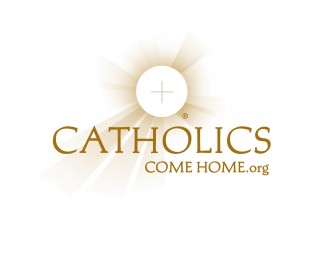 FORT WAYNE — The Diocese of Fort Wayne-South Bend has long served the spiritual needs of its people by offering a Church-home steeped in the rich sacramental tradition of the Catholic faith. It continues to strive to welcome and embrace all its members, even those who may have stepped away from community worship.

In an effort to invite inactive Catholics to rediscover the fullness of their faith, a new media campaign has been approved by Bishop Kevin C. Rhoades, and will be launched across the diocese this late fall and winter, running from Dec. 17 through Jan. 31. The campaign will include the use of television ads, yard signs, banners and other signage that will direct people to the national and local websites of Catholics Come Home.

According to its website, www.catholicscomehome.org, Catholics Come Home, Inc. is an independent, nonprofit Catholic apostolate that creates and broadcasts media messages to evangelize inactive Catholics and others. The organization was founded by Tom Peterson and presents an interactive, easy-to-navigate website and a multitude of resources, including links to nearby parishes and ways to get involved.

The partnership between the diocese and Catholics Come Home organization is being coordinated by Natalie Kohrman, director of the Office of Spiritual Development and Evangelization, and Mary Glowaski, secretariat for Evangelization and Special Ministries.

Kohrman reports that the media campaign has been very successful in other dioceses with statistics showing a 10 percent increase in Mass attendance overall and increased numbers in the confessionals. “The majority of folks just return to the sacraments,” says Kohrman.

The initiative capitalizes on research statistics that show the average American watches more than 40 hours of television each week, and TV has more impact and reaches more people than any other single advertising medium.

The four stirring commercials, to be aired on all local affiliates, “offer an invitation in a way that people can’t do one to one,” says Kohrman. She adds that each commercial offers “traditional imagery meant to make people think back to youth and faith.”

Each ad illustrates the universality of the Catholic Church and includes testimonies from real people who have rejoined the community of believers.

The local website launching soon, will work in conjunction with the media ads and signs, and will feature a welcome video from Bishop Rhoades, answers to frequently asked questions about the Church, and groups and activities that are occurring across the diocese.

Glowaski says the campaign will have an impact not only on inactive Catholics but practicing Catholics as well.

“The campaign stirs the desire for faith. And it encourages Catholics to extend themselves to others in the family,” Glowaski says.

“It’s about relationship with Christ and one another,” she adds.

Kohrman and Glowaski agree that Catholics leave the Church for a myriad reasons including life changes such as job shift changes, divorce, moves, misinformation and even woundedness. Glowaski stresses, “There are people who are deeply wounded and they are important to us. We want them to know we are here.”

She adds, thoughtfully, “The Church is impoverished without the members of its body. If they are missing, we are not whole!”

Kohrman and Glowaski both stress this is not a structured program, but a call to live the Gospel. The national organization provides the commercials and best practices for each diocese to choose from. Each parish in the diocese is asked to evaluate what they do well and build on that. “They don’t have to start one thing new — just capitalize on what they do well and invite these people to them,” says Kohrman.

Promotion has already begun with in-house presentations to diocesan and parish staff and clergy.

Mass attendance numbers will be counted in October and then in February for statistical results.

The campaign offers many simple ways to invite inactive Catholics back.

“It takes a welcoming spirit,” says Kohrman, who adds that basic acts, like an invitation, a ready smile in church, holding the door or making room in the pew if someone new arrives, will help in this effort.

Extending an invitation to come to church, encouraging others, listening to others’ story and praying for friends and family will have a powerful impact on the Catholic community.

“We want the people in the pews to recognize that they can invite others — even if they say no … “ says Kohrman.

Glowaski adds, “As many Catholics as there are, there are that many ways to come back. People invite me all the time to be a better me … That’s what this is — inviting each other to be more Christlike. … It’s about changing hearts — changing our hearts.”