The following is the text of the homily delivered by Bishop Rhoades at the Holy Hour with Young Adults on November 8th at Our Lady of Good Hope Church in Fort Wayne:

It is good to be with you this evening for this Holy Hour of prayer before the Blessed Sacrament. I have been asked to speak on perhaps the most difficult question asked by human beings, a question believers ask God — why suffering? What is its meaning? It is a question that expresses the anguish within ourselves when we experience not only bodily pain, but also spiritual pain, in ourselves and in those we love. It is a question also posed when people encounter tragedy and sufferings from natural catastrophes, like hurricanes and earthquakes. Or the tragedy of suffering that results from evil actions, like that of the innocent killed in Las Vegas last month or the innocent struck down by the ISIS-inspired murderer in New York last week and, just this past Sunday, the many innocent people murdered in Texas while worshipping in church. In these latter cases, we see suffering caused by moral evil. The question of all human suffering leads ultimately to the mystery of evil. 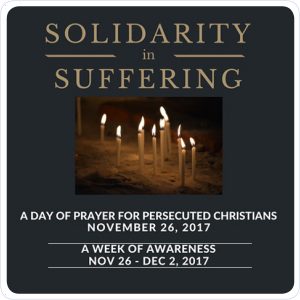 I cannot think of a better place to speak about the mystery of evil and the meaning of suffering than here before the Blessed Sacrament, the sacrament of love in which we “taste and see the goodness of the Lord.” As we pray before the Holy Eucharist, we find the fullest source of the answer to the question of the meaning of human suffering. The answer has been given to us by God in the suffering of His Son. The answer is the cross of Jesus. The “why” of human suffering and the answer to evil can be discovered most deeply when we contemplate the love of the Father who sent His Son into the world to save us. Jesus reveals this love. In Eucharistic adoration, we gaze upon the Sacred Host, the Body of Christ present under the sign of bread, the Body born of the Virgin Mary which suffered on the Cross and is now glorified in heaven. The Eucharist is His Body given for us and His Blood poured out for us for the redemption of the world.

The question of the meaning of suffering, in many ways an impenetrable question, finds an answer, above all, in the Passion of Jesus. On the cross, Jesus not only embraced human suffering in an incomparable way, but also made suffering redemptive. He conquered evil with good. He accomplished our salvation from sin and death by His own suffering on the cross. In suffering voluntarily and innocently, Christ gives the answer to the question about suffering and its meaning.

Jesus brings suffering into what we can call “a new dimension,” the dimension of love, salvific love. The Son of God strikes evil at its very root, conquering sin and death with the power of love. “He conquers sin by His obedience unto death, and He overcomes death by His resurrection” (Salvifici Doloris 14). In His passion, Jesus took all human suffering upon Himself. He gave it a new meaning. He used suffering to accomplish the work of salvation. He used it for good. His love transformed suffering so that this awful reality that is connected to evil might become a power for good. So suffering now has a saving power. And that is how we, as Christians, can find meaning and purpose in suffering, what before we might have thought was totally useless.

In the great apostolic letter of Pope St. John Paul II on the Christian meaning of human suffering, we read the following: “Human suffering has reached its culmination in the passion of Christ. And at the same time it has entered into a completely new dimension and a new order: it has been linked to love, … to that love which creates good, drawing it out by means of suffering, just as the supreme good of the Redemption of the world was drawn from the cross of Christ, and from that cross constantly takes its beginning. The cross of Christ has become a source from which flow rivers of living water” (SD 18).

So Jesus has not only redeemed us from sin and death, He has also redeemed suffering. He has made it redemptive. He has made it a source and means of something good: redemption and eternal life. He accomplishes redemption through suffering. As John Paul wrote, “Christ has raised human suffering to the level of the Redemption. Thus each man, in his suffering, can also become a sharer in the redemptive suffering of Christ” (SD 19). Here we get to the very personal aspect of the question of suffering. How do we deal with it and find meaning in it and even do good through it?

We might ask the question, “what can possibly be lacking in Christ’s sufferings, Christ’s afflictions?” The answer is that all that is lacking is our part in them. As St. John Paul II wrote: the redemption achieved by Christ “remains always open to all love expressed in human suffering.” In the dimension of love, the redemption “is, in a certain sense, constantly being accomplished. Christ achieved the Redemption completely and to the very limits; but at the same time, He did not bring it to a close. In this redemptive suffering, through which the Redemption of the world was accomplished, Christ opened Himself from the beginning to every human suffering and constantly does so. Yes, it seems to be part of the very essence of Christ’s redemptive suffering that this suffering requires to be unceasingly completed” (SD 24).

When we think about our part in completing what is lacking in Christ’s sufferings, we can think it is very small, even miniscule compared to His. Yet, our sufferings are, as John Paul wrote, “a very special particle of the infinite treasure of the world’s Redemption” (SD 27). The truth is, even if a small part, it has meaning when it is joined to Christ. It can be fruitful. We can participate with Christ in redeeming the world.

Our suffering can become part of Christ’s work, the greatest work ever done, the work of salvation. This happens when we have faith. With faith, we offer our sufferings up to God and He uses them in a mysterious and powerful way for the redemption of the world through the power of love, the love that is the very inner life of God. So in faith, when we are suffering, we can experience an inner joy that comes from love, by offering our pain and suffering to God, with Jesus, generally for the salvation of the world and even specifically for particular people. When I visit the sick and suffering, I always ask for their prayers, not just for myself, but for the Church. I believe these prayers have a special efficacy when the suffering person is offering their sufferings in union with Christ.

This reflection, in the end, would not be complete or even make sense if it were not for the Resurrection of Jesus. As St. Paul wrote: “If Christ has not been raised, then our preaching is in vain and your faith is in vain … If for this life only we have hoped in Christ, we are of all men most to be pitied” (1 Corinthians 15: 14, 19). If the cross were the end of the story, we would be left where we began. Suffering would still seem meaningless and we would be left in a state of hopelessness. The mystery of the Redemption, which is rooted in suffering, does not end in suffering. In the end, love triumphs. The love of the cross is victorious.

Finally, I wish to emphasize that as Christians we do not give a merely abstract answer to the difficult question of why God permits suffering. Our answer is very concrete. The answer is a Person, Jesus Christ, and His cross and resurrection. Because of Him, we can even speak of suffering as a call, a vocation. St. John Paul II wrote: “Christ does not explain in the abstract the reasons for suffering, but before all else He says: ‘Follow me’ ‘Come!’ Take part through your suffering in this work of saving the world, a salvation achieved through my suffering! Through my Cross. Gradually, as the individual takes up his cross, spiritually uniting himself to the Cross of Christ, the salvific meaning of suffering is revealed before him. He does not discover this meaning at his own human level, but at the level of the suffering of Christ. At the same time, however, from this level of Christ the salvific meaning of suffering descends to man’s level and becomes, in a sense, the individual’s personal response. It is then that man finds in his suffering interior peace and even spiritual joy” (SD 26).

Here before the Lord present in the Blessed Sacrament, we see the humility of our God who humbled Himself in becoming man and humbled Himself in His suffering and death on the cross, and who still humbles Himself in this great sacrament. Through His love and humility, He has redeemed the world. And He invites us to join Him in His sacrifice of love. He gives Himself to us and unites us to Himself in Holy Communion. When we are united to Christ in His suffering for the redemption of the world, we are living the Eucharist. May the Lord give us the faith and love to do so, together with Mary and all the saints who shared in the suffering of Christ and now reign with Him in glory!