VATICAN CITY (CNS) — Pope Francis has confirmed the removal from the priesthood of Theodore E. McCarrick, the 88-year-old former cardinal and archbishop of Washington.

The Vatican announced the decision Feb. 16, saying he was found guilty of “solicitation in the sacrament of confession and sins against the Sixth Commandment with minors and with adults, with the aggravating factor of the abuse of power.”

A panel of the Congregation for Doctrine of the Faith found him guilty Jan. 11, the Vatican said. McCarrick appealed the decision, but the appeal was rejected Feb. 13 by the congregation itself. McCarrick was informed of the decision Feb. 15 and Pope Francis “recognized the definitive nature of this decision made in accord with law,” making a further appeal impossible.

By ordering McCarrick’s “dismissal from the clerical state,” the decision means that McCarrick loses all rights and duties associated with being a priest, cannot present himself as a priest and is forbidden to celebrate the sacraments, except to grant absolution for sins to a person in imminent danger of death.

The only Church penalty that is more severe is excommunication, which would have banned him from receiving the sacraments. The other possible punishment was to sentence him to a “life of prayer and penance,” a penalty often imposed on elderly clerics; the penalty is similar to house arrest and usually includes banning the person from public ministry, limiting his interactions with others and restricting his ability to leave the place he is assigned to live.

McCarrick’s punishment is the toughest meted out to a cardinal by the Vatican in modern times. 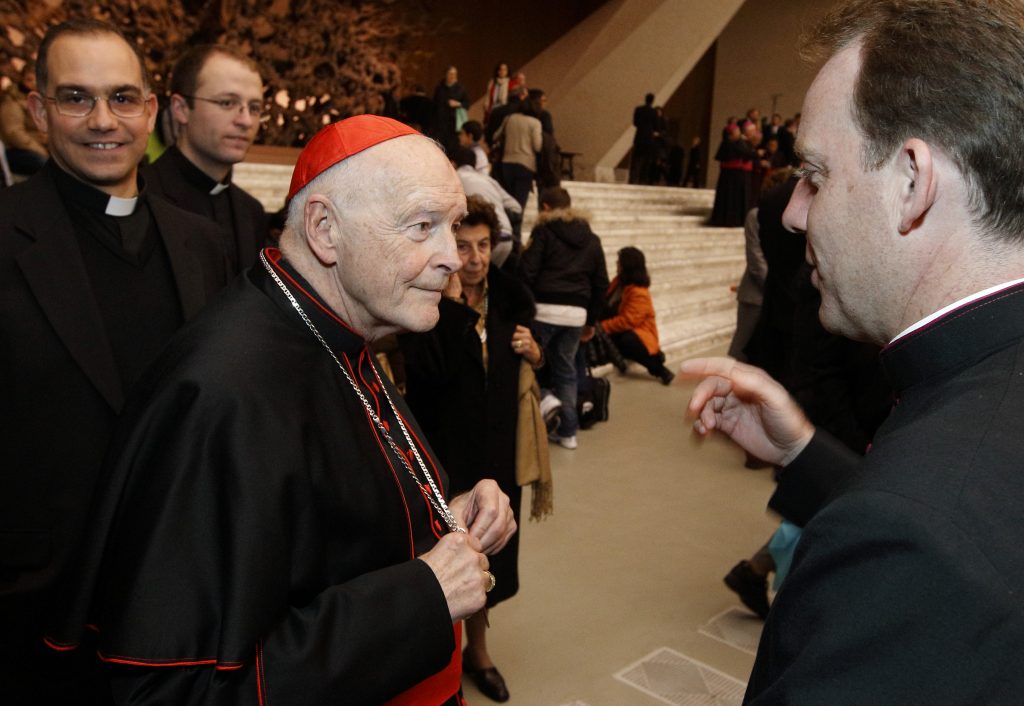 McCarrick’s initial suspension from ministry and removal from the College of Cardinals in 2018 came after a man alleged that McCarrick began sexually abusing him in 1971 when he was a 16-year-old altar server in New York; the Archdiocese of New York found the allegation “credible and substantiated” and turned the case over to the Vatican.

At that point, in June, then-Cardinal McCarrick said he would no longer exercise any public ministry “in obedience” to the Vatican, although he maintained he was innocent.

In late July, the pope accepted McCarrick’s resignation from the College of Cardinals and ordered him to maintain “a life of prayer and penance” until the accusation that he had sexually abused a minor could be examined by a Vatican court.

In the weeks that followed the initial announcement, another man came forward claiming he was abused as a child by McCarrick, and several former seminarians spoke out about being sexually harassed by the cardinal at a beach house he had in New Jersey.

Since September, McCarrick has been living in a Capuchin friary in rural Kansas.

The allegations against McCarrick, including what appeared to be years of sexual harassment of seminarians, also led to serious questions about who may have known about his activities and how he was able to rise to the level of cardinal.

At least two former seminarians reported the sexual misconduct of McCarrick to their local bishops as far back as the 1990s. The Archdiocese of Newark and the dioceses of Metuchen and Trenton made a settlement with one man in 2005, and the Diocese of Metuchen settled with the other man in 2007.

A spokeswoman for the Diocese of Metuchen told Catholic News Service in August that both settlements were reported to the Vatican nuncio in Washington. The two archbishops who held the position of nuncio in 2004 and 2006 have since died.

Archbishop Carlo Maria Vigano, who served as nuncio in Washington from 2011-16, made headlines in mid-August when he called for Pope Francis to resign, claiming the pope had known of allegations against McCarrick and had lifted sanctions imposed on McCarrick by now-retired Pope Benedict XVI.

In an open letter to Archbishop Vigano released in October, Cardinal Marc Ouellet, prefect of the Congregation for Bishops since 2010, said that in 2011, “I told you verbally of the situation of the bishop emeritus (McCarrick) who was to observe certain conditions and restrictions because of rumors about his behavior in the past.”

Then-Cardinal McCarrick “was strongly exhorted not to travel and not to appear in public so as not to provoke further rumors,” Cardinal Ouellet said, but “it is false to present these measures taken in his regard as ‘sanctions’ decreed by Pope Benedict XVI and annulled by Pope Francis. After re-examining the archives, I certify that there are no such documents signed by either pope.”

Cardinal Ouellet’s letter was published a few days after the Vatican issued a statement saying that it would, “in due course, make known the conclusions of the matter regarding Archbishop McCarrick.”

In addition, Pope Francis ordered “a further thorough study of the entire documentation present in the archives of the dicasteries and offices of the Holy See regarding the former Cardinal McCarrick in order to ascertain all the relevant facts, to place them in their historical context and to evaluate them objectively.”

The Vatican statement said it is aware “that, from the examination of the facts and of the circumstances, it may emerge that choices were made that would not be consonant with a contemporary approach to such issues. However, as Pope Francis has said: ‘We will follow the path of truth wherever it may lead.’ Both abuse and its cover-up can no longer be tolerated, and a different treatment for bishops who have committed or covered up abuse, in fact, represents a form of clericalism that is no longer acceptable.”

McCarrick had been ordained to the priesthood in 1958 for the Archdiocese of New York. James, the first child he baptized after ordination, claimed that from the time he was 11 years old and for some 20 years, McCarrick sexually abused him.

In 1977, McCarrick was ordained an auxiliary bishop for the Archdiocese of New York and, in 1981, St. John Paul II named him the first bishop of the Diocese of Metuchen, New Jersey. Five years later, he became the archbishop of Newark, New Jersey, and in November 2000 St. John Paul named him archbishop of Washington, D.C., and made him a cardinal early in 2001. McCarrick retired in 2006.

At least three other cardinals have been accused of sexual abuse or impropriety in the past 25 years. In the 1990s Austrian Cardinal Hans Hermann Groer was forced to step down as archbishop of Vienna and eventually to relinquish all public ministry after allegations of the sexual abuse and harassment of seminarians and priests; he died in 2003 without having undergone a canonical trial.

Pope Benedict XVI forced Scottish Cardinal Keith O’Brien to step down as archbishop of St. Andrews and Edinburgh in early 2013; after an investigation, Pope Francis withdrew his “rights and duties” as a cardinal, although he retained the title until his death in March 2018.

Australian Cardinal George Pell, facing charges of abusing minors, has been on leave from his post as head of the Vatican Secretariat for the Economy since mid-2017; he reportedly was found guilty of some charges in December, but the court has imposed an injunction on press coverage of the trial. Pope Francis told reporters he would not speak about the case until the court proceedings have run their course.