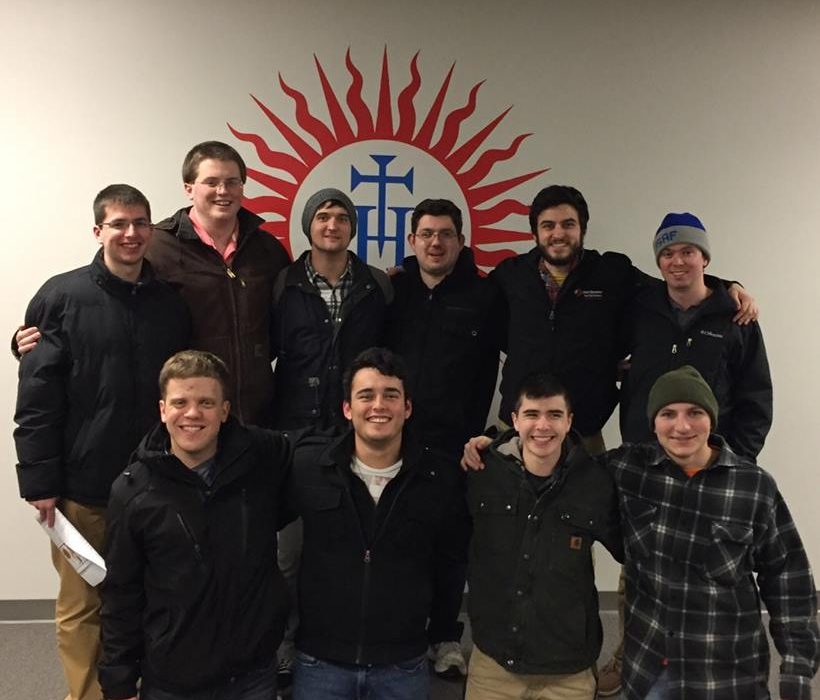 Indiana University-Purdue University Fort Wayne’s Catholic group, Mastodon Catholic, is focusing this year on developing community and dipping deeper into the faith. The group has also gone through changes that will help with its mission, including a new name, a new chaplain, different weekly activities and the development of men’s and women’s households.

Mastodon Catholic changed its name to reach out to students on campus differently. The previous name of the group was IPFW Newman Catholic Fellowship. Riley McCullough, president of Mastodon Catholic, explained that someone who isn’t Catholic might not understand that “fellowship” means “community.” She also said that the name Mastodon Catholic is more straightforward.

The addition of chaplain Father Royce Gregerson has changed the game for Mastodon Catholic. Father Gregerson offers Mass on campus regularly and is present at the group’s other events. His presence, McCullough said, brings a high level of knowledge, and he talks often about his experiences studying in Europe. Along with this, Father Gregerson is assigned to St. Charles Borromeo, which is only five minutes from IPFW; Mastodon Catholic is able to hold weekly events at St. Charles, providing a stability of meeting place that has been helpful for the group.

Mastodon Catholic held events during the past year that focused on obtaining deeper information about the Catholic faith. Some of these events include talks about the pro-life and pro-marriage movements, Theology of the Body, drinking, drugs and church teachings. Other events included Mass on campus, the Summit Awakening conference and an annual retreat at St. Felix Friary.

Among the changes, the recent establishment of a men’s and a women’s household have been the largest and possibly the most crucial. Both started after the group’s campus minister approached her own friends and McCullough about the idea of households, hoping that it would help Mastodon Catholic develop a deeper sense of community. She got the idea from Ohio State University’s St. Paul’s Outreach, which consists of a small group of men or women living together in community to study, learn and grow together. 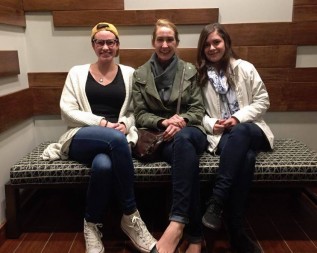 The members of the Spes Unica household, a Catholic women’s house on the campus of IPFW, pray together nightly.

The women’s household, Spes Unica, translates from Latin into “Our Only Hope.” McCullough said the women in the household prayed about a name and “wanted something that incorporated sisterhood.” One of the women came across the phrase “Spes Unica,” which is part of the Latin phrase, “Ave Cruz, Spes Unica” — “Hail to the cross, our only hope.” The name resonated with the group because of how true it is that God is their only hope.

“The purpose of Spes Unica is women helping women become better women,” McCullough said. One of the ways three women in the household help each other achieve the goal is is by praying the Compline together at night. The women have busy schedules that include work and school, but McCullough said it’s nice to come home to holy women who have holy conversations.

Due to their schedules, the women haven’t been able to plan as many regular events as they’d like, but it’s something that they’re working on this semester. Before establishing regular activities, Spes Unica wants to get a sense of the other women in their community and their interests. For example, if other women are interested in volunteering for a pro-life cause, then that’s something that they’ll do together. McCullough said that the focus of any of their activities is to invest in the women in their community.

Even though Spes Unica has an established community, six of the women are graduating this year, so more women are needed. Mastodon Catholic has a larger group of freshmen and sophomores currently, so there is a new age of women within the group. The main goal is that these women will get involved with Spes Unica and that their example will set an example for more women to join the household in the future. 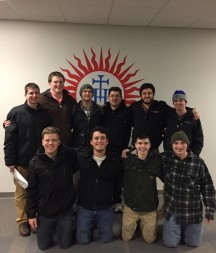 Members of the Ave Crux household, a men’s Catholic fellowship at IPFW campus are currently looking for a permanent house at which to gather.

The men’s household took its name from the first part of the same phrase. Phillip Litchfield, vice president of Mastodon Catholic, said that Ave Crux’s original name was Brothers of Divine Joy; however, the men decided to change the name because they like “the mysterious, virile and delightful joy that devotion to Christ’s cross can bring.”

Litchfield said that the most important event for Ave Crux is weekly Adoration at St. Jude’s Adoration Chapel. Some of their other events include weekly “Lagers and Logos” Bible study, where the men come together to “encounter Christ in the gospel as well as discover the fascinating nuance of both Bible and beer,” and a monthly half-day retreat. In addition, at their weekly meetings, the men plan events, grow in Christian brotherhood and work on setting a foundation to the household community so that the community may continue past graduation.

While Ave Crux is thriving with members and activities, they face the challenge of not having a physical house. The men work around this challenge by going to members’ apartments, dorm rooms and relatives’ houses and communicating through group messaging and email. Ave Crux also encourages its members to meet up for a meal, to study or play video games. Litchfield said that this arrangement hasn’t been easy, but it’s their goal to have a house for the next school year because daily interactions are important for the men to help “build the bonds of brotherhood.”

Litchfield stressed that Ave Crux needs prayers. “Ave Crux is a work of the Holy Spirit and beyond the abilities of any of the brothers,” he said. He also said that in order to reach their full potential, Ave Crux members need to “lead lives of authentic masculinity, virtue and Christian charity” that will inspire other men on campus. 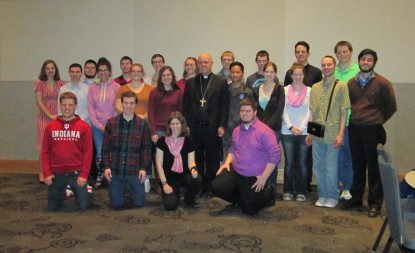 Bishop to students:  Avoid hypocrisy in matters of faith

Bishop Kevin C. Rhoades celebrated Mass at IPFW on Tuesday, Feb. 7 for the Mastodon Catholic group as well as other students on campus. The bishop has the custom of celebrating Mass on the campus once a year. IPFW chaplain Father Royce Gregerson concelebrated the Mass.

The homily began with Bishop Rhoades telling students about the importance of daily Mass. He shared that he started attending daily Mass halfway through his freshman year of college and heard a calling to the priesthood by his sophomore year. The bishop added that being nourished by the Eucharist through attending daily Mass is a beautiful habit.

The rest of the homily focused on the Gospel reading from Mark 7:1-13, in which Jesus addressed the Pharisees about their hypocrisy concerning God’s law. In the parable, the Pharisees chastised the Apostles for eating with unclean hands. According to the law of the elders, a person of the time should have washed his hands carefully before eating.

Jesus responded by addressing Isaiah’s prophesy, saying, “This people honors Me with their lips, but their hearts are far from Me” (Mark 7:6). Then Jesus told the Pharisees that they “disregard God’s commandments, but cling to human tradition” (Mark 7:8). The bishop referred to the Pharisees’ reaction as “paying lip service” to God and worshipping Him superficially. He also said that the Pharisees nullified the word of God through practicing the traditions of the elders.

The bishop then discussed hypocrisy in today’s world. “Hypocrisy is a danger that we need to avoid,” he said, stressing that Christians especially need to avoid hypocrisy in their lives and that hypocrisy among Christians could cause young people to leave the faith. He asked those present to “examine ourselves to make sure that we’re not like the Pharisees.” He also told the students to ponder the questions “Where is my heart? Where is my heart in relation to God?”