Authorities named the group April 22 and said 24 people had been arrested in connection with eight bombings that left at least 321 people dead and more than 500 injured.

The violence was the deadliest the country had seen since a 26-year civil war ended in 2009.

Two Catholic churches — St. Anthony’s Shrine in Colombo and St. Sebastian’s Church in Negombo — as well as an evangelical church in Batticaloa were targeted during Easter services. The Shangri-La, Kingsbury and Cinnamon Grand hotels in Colombo also were attacked.

“We do not believe these attacks were carried out by a group of people who were confined to this country,” Health Minister Rajitha Senaratne said April 22. “There was an international network, without which these attacks could not have succeeded.” 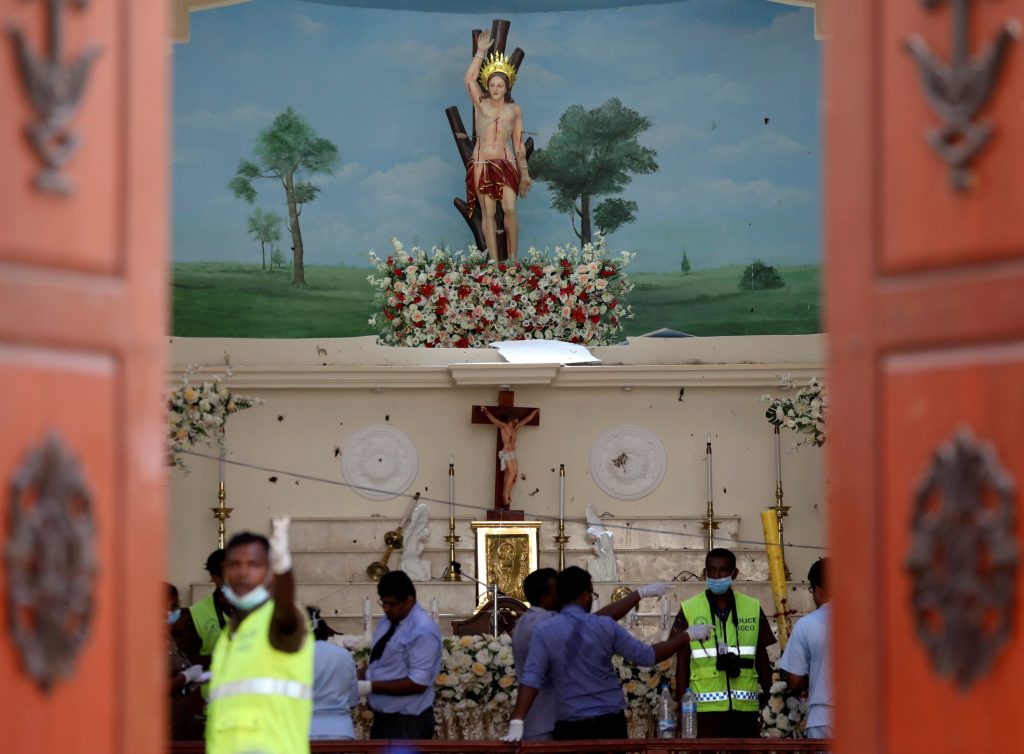 The majority of those killed and injured are believed to be Sri Lankan nationals, many of whom were attending church services. The government said those killed included at least 39 foreign nationals from the United States, United Kingdom, India, China, Japan, Australia, Turkey, Australia and other European countries.

Photos from the church bombings showed blood-spattered walls, broken glass and statues knocked on their sides.

Christians make up about 6%, or about 1.5 million, of Sri Lanka’s population of 22 million, according to the country’s 2012 census. About 85% of Christians are Catholic The majority of the population, about 70.2%, is Buddhist, while Muslims make up 9.6% and Hindus 12.6% of the population.

Pope Francis used his Easter Mass at St. Peter’s Basilica at the Vatican to express his “loving closeness to the Christian community, targeted while they were gathered in prayer, and all the victims of such cruel violence.”

“I entrust to the Lord all those who were tragically killed and pray for the injured and all those who are suffering as a result of this dramatic event,” he said, expressing closeness to Sri Lanka’s Christian community.

Cardinal Malcom Ranjith of Colombo visited St. Sebastian’s Church to witness the recovery efforts of security forces, the BBC reported. Briefing reporters afterward, he condemned the violence “that has caused so much death and suffering to the people.”

“It’s a very, very sad day for all of us,” he said. “I wish to, therefore, express my deepest sympathy to all those innocent families that have lost someone, and also to those who have been injured and rendered destitute.”

The cardinal also called on the government to investigate the bombings as thoroughly as possible and to punish the perpetrators “mercilessly.”

Bishops’ conferences around the world, including those in the United States, Australia, Pakistan and Indonesia, extended their sympathy.

Damien Kingsbury, professor of international politics and a Sri Lankan expert at Deakin University in Melbourne, Australia, said there has been no history of Islamic terrorism in Sri Lanka. National Thowheeth Jama’ath surfaced on only on a few occasions in recent years in relation to hate speech and property-related attacks on Buddhist temples, he said.

“It’s likely that recent return of Islamic State fighters to Sri Lanka had strengthened their resolve,” Kingsbury told Catholic News Service. Earlier in April, the Sri Lankan government had identified a number of Sri Lankans who had returned to the country following the collapse of the so-called IS caliphate in Syria.

Sri Lanka Police Chief Pujuth Jayasundara issued a warning about the organization carrying out suicide bombings of prominent churches 10 days before the attacks, reported Agence-France Presse. It was unclear what action security forces had taken ahead of Easter in response.

Sri Lanka Prime Minister Ranil Wickremesinghe claimed he and other top government officials were not told and has said “we must look into why adequate precautions were not taken.”

Experts noted that the precise coordination — six explosions went off within 20 minutes of each other — and the number of sites chosen for attack echoed the 2008 Mumbai assault on major hotels by an Islamic State-linked terrorist group.

The bombings have ended a decade of relative peace in Sri Lanka, a country with a long history of battling terrorism during civil war between government forces and the Liberation Tigers of Tamil Eelam.

A curfew was imposed in Sri Lanka from 8 p.m. April 22 until 4 a.m. April 23 local time. A national day of mourning was declared for April 23.

WASHINGTON — The following statement was issued by Cardinal Daniel N. DiNardo, Archbishop of Galveston-Houston and president of the U.S. Conference of Catholic Bishops, April 21 regarding simultaneous explosions in Sri Lanka targeting the country’s minority Christian community as well as luxury hotels around Colombo on Easter Sunday morning. At least 300 people were killed and more than 500 injured in the terrorist attacks.

“This morning in Sri Lanka a coordinated series of bombings killed hundreds of worshipers in Catholic Churches and others of all faiths in nearby hotels. The Churches were St. Sebastian’s Church in Negombo, St. Anthony’s Shrine in Colombo and Zion Church in the eastern city of Batticaloa. This great evil targeted these churches as they were packed full of worshipers who were celebrating Easter, the day in which Christians around the world celebrate the rising of the King of Peace from the dead. We offer our prayers for the victims and their families. And we join with all people of good will in condemning these acts of terrorism. This evil cannot overcome the hope found in our Savior’s Resurrection. May the God of hope who has raised his Son, fill all hearts with the desire for peace.”