ALBANY, N.Y. (CNS) — New York state “has become a more dangerous one for women and their unborn babies” with the passage of a bill to expand abortion called the Reproductive Health Act and Gov. Andrew Cuomo’s signing it into law, said the New York State Catholic Conference.

“Today, New York state has added a sad chapter to this already solemn date of Jan. 22, the anniversary of Roe v. Wade,” the conference said in a statement.

“Many of the state senators and Assembly members who voted for this abortion expansion are mothers themselves, who felt their child toss, turn and kick in their womb, and delighted in the progress of their pregnancy,” the conference continued.

“Many others, as well as our governor, are fathers, who held their partner’s hand as they viewed the ultrasound videos, watched their child squirm and rejoiced at the first sound of a heartbeat,” it said. “Many of these same officials were themselves born into less-than-perfect conditions — poverty, health problems, disabilities, broken families.

“All overcame these issues to rise to leadership in our state, because their parents chose life for them,” it added. 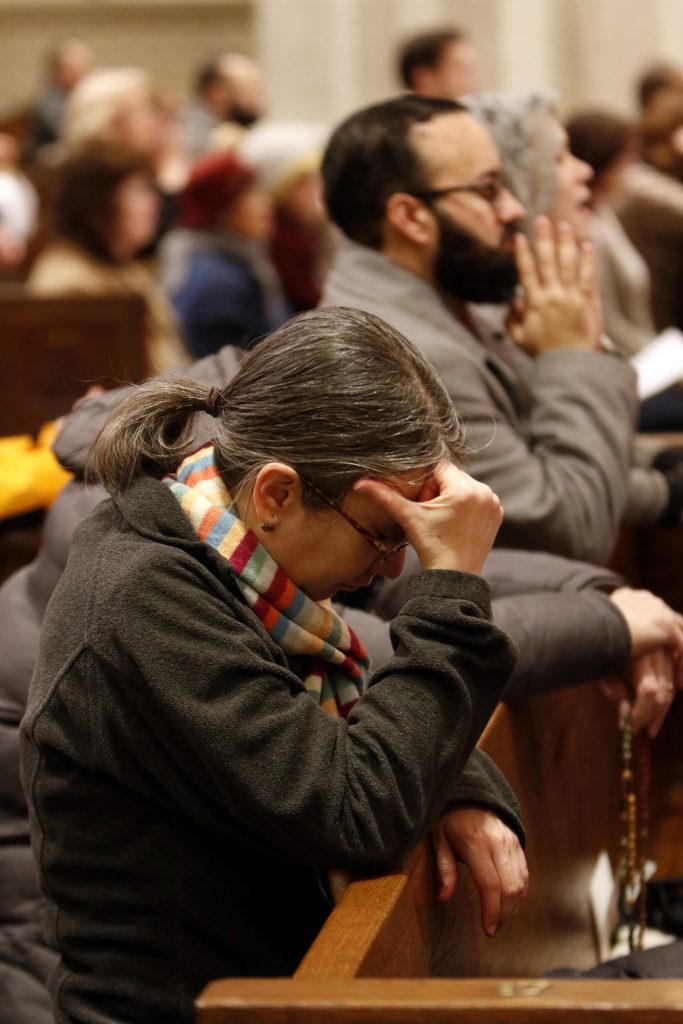 People pray during a Holy Hour Jan. 22, 2019, at St. Patrick’s Cathedral in New York City. The service and Mass that followed it comprised a Prayer Vigil for Life marking the Day of Prayer for the Legal Protection of Unborn Children. Jan. 22 is the anniversary of the U.S. Supreme Court’s Roe v. Wade decision in 1973 that legalized abortion across the nation. (CNS photo/Gregory A. Shemitz)

The new law, which was fully backed by Cuomo, a Catholic.

Ahead of the final vote, Albany Bishop Edward B. Scharfenberger issued an open letter to Cuomo published Jan. 19 at evangelist.org, the website of The Evangelist, Albany’s diocesan newspaper.

He had urged Cuomo not to let the bill, which he termed a “Death Star,” become law and he warned that he and many fear it will lead to the determination that one day “being pro-life” will be “a hate crime in the state of New York.

Two days before his letter appeared, the New York State Catholic Conference released a statement signed by all the Catholic bishops of the state urging the bill not be passed.

Among its provisions are: granting nondoctors permission to perform abortions; removing protection for an infant accidentally born alive during an abortion; and allowing late-term abortions.

In its Jan. 22 statement, the Catholic conference thanks all who partnered with the Catholic Church “in the 12-year-long fight to stop this horrendous policy, and all pro-life New Yorkers who made their voices heard in an effort to stop it.”

“Let us all pray for the conversion of heart for those who celebrate this tragic moment in the history of our state,” it said. “And we pray in a special way for the lives that will be lost, and for the women of our state who are made less safe under this law.”