WASHINGTON (CNS) — The Basilica of the National Shrine of the Immaculate Conception inaugurated its jubilee year Sept. 20 during a 100th anniversary Mass to commemorate the centennial of the placing of the shrine’s foundation stone, upon which the largest Catholic church in North America was built to honor Mary.

“Like so many great churches throughout the world, this basilica is an enduring project of countless hands and gifts,” said Washington Archbishop Wilton D. Gregory, the principal celebrant and homilist for the liturgy. “But above all, it is the grace of God that has made such a beautiful tribute to the Blessed Mother possible.”

Archbishop Gregory said those who began the project a century ago could not have envisioned the thousands of faithful who would join the efforts throughout the decades to sustain and support the basilica.

“The Basilica of the National Shrine of the Immaculate Conception is the Gospel vineyard that the Lord has made so fruitful through the labors of thousands of people of faith,” said the archbishop, who is the chairman of the National shrine’s board of trustees. 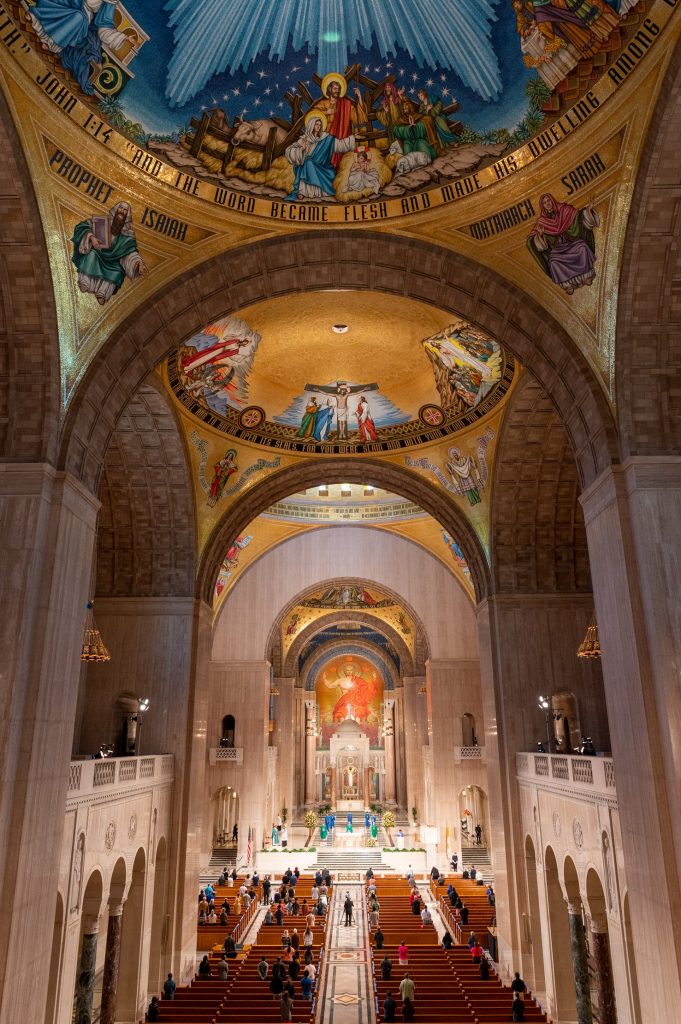 People attend Mass at the Basilica of the National Shrine of the Immaculate Conception in Washington Sept. 20, 2020. The Mass celebrated the 100th anniversary of the laying of the shrine’s foundation stone. (CNS photo/Mihoko Owada, Catholic Standard)

Joining Archbishop Gregory in celebrating the Mass were Msgr. Walter Rossi, rector of the basilica; and the priests of the basilica — Msgr. Vito Buonanno, director of pilgrimages; Father Raymond Lebrun, spiritual director; and Father Michael Weston, director of liturgy and master of ceremonies.

Msgr. Rossi welcomed attendees to the Mass while recalling the historic milestone, which took place almost exactly 100 years ago to the day.

“The foundation stone is the very first stone around which this shrine was built and is now part of the Oratory of Our Lady of Antipolo,” he said, referencing an oratory that Filipino Catholics sponsored to honor Mary.

In thanking all the shrine’s supporters — past and present — Msgr. Rossi said: “Mary’s Shrine would not be here today without the faithful support of our friends for the past 100 years. With your continued support, we look to the next 100 years of service to God’s people and devotion to the Blessed Virgin Mary.”

For the Mass, Archbishop Gregory carried the pastoral staff of Bishop Thomas Shahan, the first rector of the national shrine, a crosier which also was used by Baltimore Cardinal James Gibbons as he blessed and placed the foundation stone Sept. 23, 1920.

A chalice used during the Mass was the first chalice of the national shrine, used 100 years ago at the foundation stone placing Mass and made from jewelry donated to the shrine from the faithful throughout the United States in 1917.

Archbishop Gregory noted the many ethnic and cultural groups who established chapels within the shrine, which honor Mary and reflect their own religious devotions.

“Countless prayers and contributions have sustained and advanced the building of this great basilica that venerates the Mother of God,” he said.

The national shrine is home to more than 80 chapels and oratories that honor Mary and represent the peoples, cultures and traditions that are the fabric and mosaic of the Catholic faith in the United States.

The national shrine, said the archbishop, above all is a project that “continues to witness God’s grace and blessing for our country that thrives under Mary’s title of the Immaculate Conception.”

Due to the COVID-19 restrictions, the anniversary Mass was limited to 100 people on a first-come, first-served basis. Pope Francis granted a plenary indulgence — with the customary conditions of sacramental confession, eucharistic Communion, and prayers for the intentions of the Holy Father — for the centennial jubilee that began Sept. 20 and runs through Sept. 23, 2021.

Pope Francis visited the shrine Sept. 23, 2015, the 95th anniversary of the placing of the foundation stone.

With restrictions on people gathering at the shrine, the pontiff extended the indulgence to those who “due to reasonable circumstances” are not able to be physically present, but do so by television, internet and radio and fulfill the three usual conditions.

A celebration is anticipated for next year’s closing of the jubilee year, hopefully when the global pandemic is overcome, according to a national shrine statement.

Fidelis Chendi and his wife, Diana, were among those who attended the anniversary Mass. Chendi, an architect and a native of Cameroon, was involved in the 2017 construction of the massive mosaic that completed the Trinity Dome, the central and largest dome of the national shrine.

“It was a special honor to be here and give thanks,” he told the Catholic Standard, newspaper of the Washington archdiocese. “The shrine is the house of Mary, who is the Mother of the Church. We are so lucky to be participating.”

The Basilica of the National Shrine of the Immaculate Conception is among the 10 largest churches in the world and is the preeminent Marian shrine and patronal church in the U.S.; it has been designated a national sanctuary of prayer and pilgrimage.

Among those who have visited the national shrine during its 100-year history are Pope Francis in 2015, Pope Benedict XVI in 2008, St. John Paul II in 1979 and St. Teresa of Kolkata on several occasions.

The first Mass was celebrated in the national shrine’s Crypt Church in 1924. The shrine was blessed and dedicated in 1959 upon the completion of the superstructure of the Great Upper Church. St. John Paul raised the National Shrine to the status of Minor Basilica Oct. 12, 1990.

Boyle writes for the Catholic Standard newspaper of the Archdiocese of Washington.