Bishop Kevin C. Rhoades spoke of repentance, respect and love during a Mass of Healing and Remembrance marking the 175th anniversary of Miami Tribe members’ forced removal from their homeland to land in the West.

Read the homily from the Mass.

“We are called to be agents of healing and peace in a divided and conflict-ridden world,” Bishop Rhoades said during the Mass, which took place at 5 p.m. Oct. 2 in the Cathedral of the Immaculate Conception in Fort Wayne. “Today we stand in love and solidarity with our Miami brothers and sisters as together we mourn the removal of their ancestors 175 years ago.”

The Diocese of Fort Wayne-South Bend scheduled the Mass after being told of the removal anniversary by Dani Tippmann, a Miami Tribe of Oklahoma member who lives in the Fort Wayne area and who attends St. Patrick Parish in Arcola.

The Miami people, who are called “Myaamiaki” in their own language, have lived in the Wabash River Valley area since long before French explorers, traders and missionaries first came in contact with them in the 1600s. 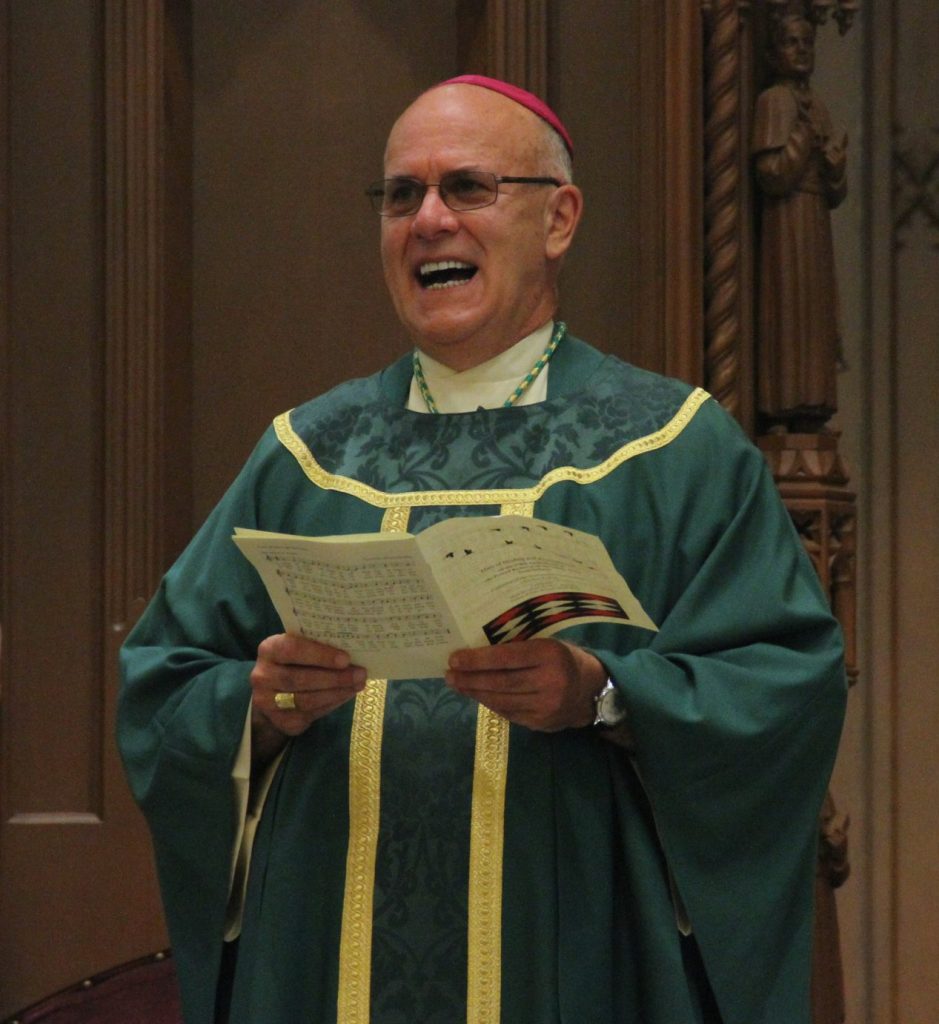 “Today we stand in love and solidarity with our Miami brothers and sisters as together we mourn the removal of their ancestors 175 years ago,” said Bishop Rhoades.

The Miami removal followed decades of wars and treaties with the U.S. government that gradually stripped the Miamis and many other tribes of their land. In fall 1846, U.S. soldiers rounded up about half of the approximately 600 Miami people in Indiana and forced them to board canal boats in Peru. The boats departed Oct. 6 on a nearly month-long journey to the Miamis’ new land in what became eastern Kansas.

Seven Miamis died on the trip, and about 30 more survived the journey but died by the end of the year. About 20 years later, many of the surviving Miamis had to move again to their current reservation in northeast Oklahoma.

At the Mass of Healing and Remembrance, Catholic social teachings on the dignity of every human life and love and respect for people of all cultures guided the evening.

Miami Tribe members participated in planning and celebrating the Mass. Images of Miami ribbon work patterns and flying sandhill cranes, the latter of which are a symbol of the Miami people, decorated the cover of the program for the Mass.

Tribe members and their families, who totaled a combined 50 to 60 people, sat in reserved pews at the front of the Cathedral. More than 100 other people attended the Mass, which took the place of the Cathedral’s usual 5 p.m. Saturday vigil Mass. 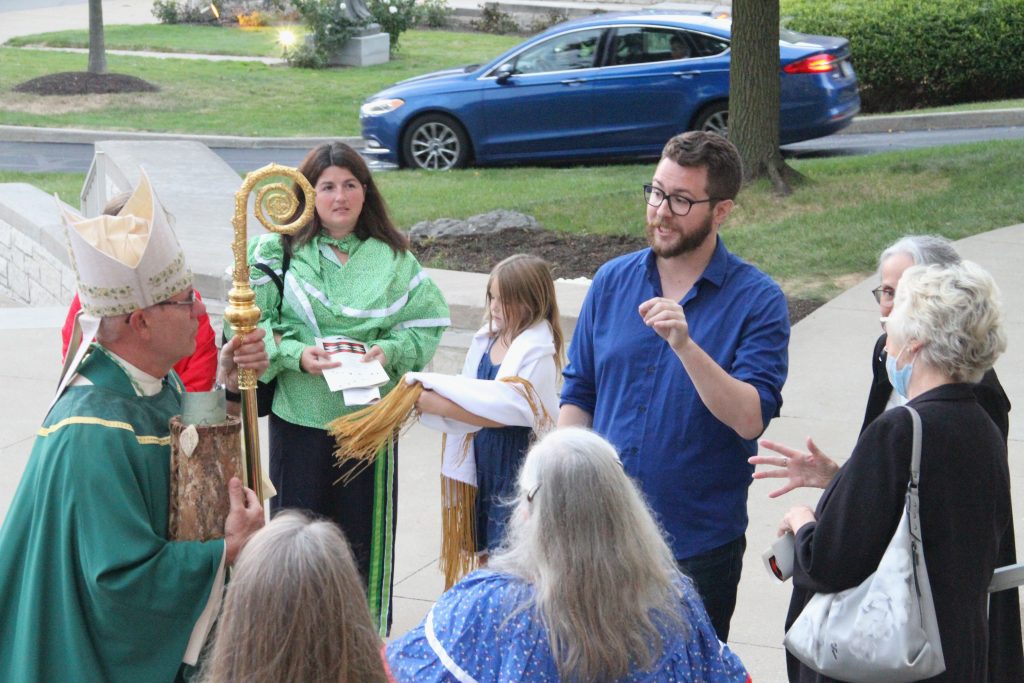 “Today we stand in love and solidarity with our Miami brothers and sisters as together we mourn the removal of their ancestors 175 years ago.”

Tribal historic preservation officer Hunter, who lives in Fort Wayne, read the first and second Scripture readings and the prayers of the faithful. When it came time to say “The Lord’s Prayer,” her son, John Bickers of Columbus, Ohio, recited it in the Miami language.

During his homily, Bishop Rhoades described the Miami and Potawatomi peoples as some of the first Catholics in what is now this diocese. The Miamis lived mainly in the Wabash River Valley, and the Potawatomis resided in the South Bend area, northwest Indiana and Michigan.

French missionaries introduced the Catholic faith to Great Lakes tribes in the 1600s.

Priests serving in the Wabash River area respected the language and culture of the Miamis and admired the people’s respect for the land and nature, Bishop Rhoades said. Many Miamis became Catholics after hearing the missionaries’ teachings about the salvation offered through faith in Jesus Christ.

Despite Pope Paul III’s proclamation in 1537 that native people shouldn’t be deprived of their freedom or possession of property, many Catholics and Christians exploited indigenous people, Bishop Rhoades said.

“We must ask forgiveness, our recent Popes have said, for the offenses and crimes committed against the native peoples during the so-called conquest of America,” he said. The Bishop also reminded his audience of the words of Pope Francis, who urged people to oppose colonialism but to say yes to encounters between peoples and cultures.

“At this Mass, we say NO to what happened to the Miami peoples here in Fort Wayne 175 years ago,” the bishop continued. “We say YES to the encounter between peoples and cultures that takes place with mutual respect, justice and love.”

Bishop Rhoades praised the efforts of the good Catholic priests, bishops and laity who shared the Gospel with native peoples and stood by them, sometimes at the cost of their own lives.

Those priests included Father Julian Benoit, who built the Cathedral and is buried beneath it. A friend and adviser to the Miamis, Father Benoit opposed the use of military force to make them move west. Some reports say he traveled with them on the removal trip and, after they arrived on their new land, stayed with them for two weeks before returning home, Bishop Rhoades said.

The bishop said he has a personal devotion to Father Benjamin Petit, who is buried under the log chapel at the University of Notre Dame. Father Petit loved and was loved by the Potawatomi people he served in the South Bend area. He traveled with them on their removal, a journey that became known as the “Trail of Death” because 42 Potawatomis died along the way. Father Petit became ill during the trip and died while traveling back to Indiana.

“We remember the battles, the violence, the injustices and the betrayals of the past,” he said. “We pray for healing, peace, reconciliation and justice.”

As he concluded the Mass, the bishop invited those present to stop afterward at the Diocesan Museum next door to view its exhibit about the Miami removal. The exhibit runs through Oct. 30.

Miami Tribe members expressed appreciation for the Mass and the recognition of this traumatic event in their history.

“It was very touching. It was very emotional,” tribe member Catherine Nagy Mowry of Fort Wayne said. “It is touching to have a recognizing of our family’s pain.”

She and several tribe members sang a Miami honor song after Mass to honor their ancestors. 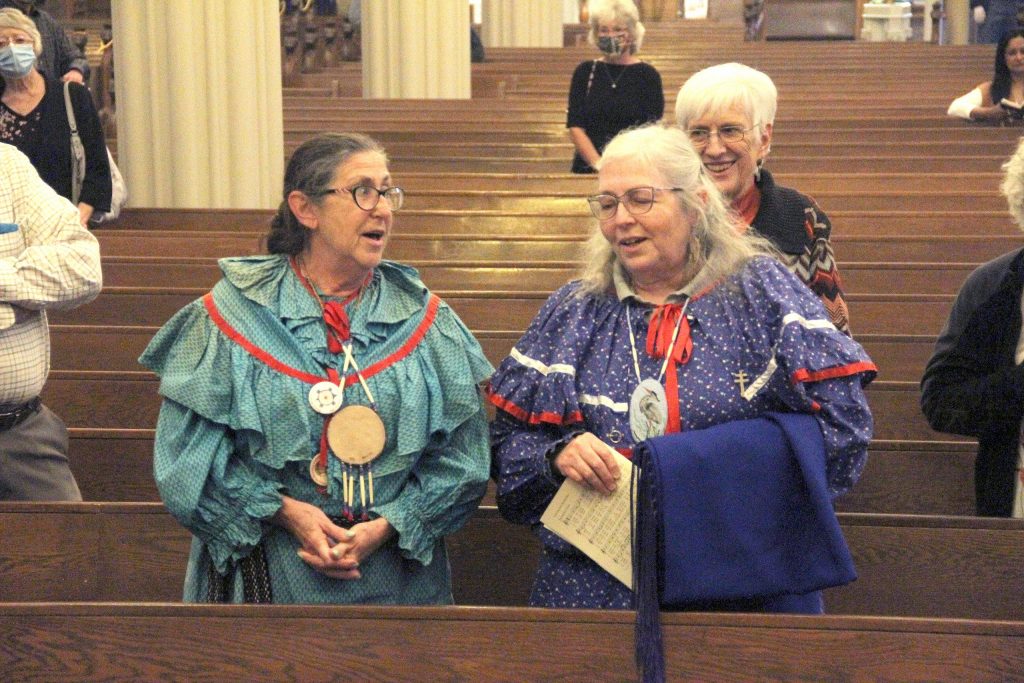 Photos by Joshua Schipper
After the conclusion of a Mass of Healing and Remembrance of the forced removal of the native Miami Tribe from the Fort Wayne area in 1846, two Miami women in attendance sing a song in the Miami language. The Mass was celebrated Oct. 2 by Bishop Kevin C. Rhoades at the Cathedral of the Immaculate Conception, Fort Wayne. Find Bishop Rhoades’ homily from the Mass at diocesefwsb.org.

“It acknowledges the shortcomings where sometimes politics overruled the morality of the situation,” Strack said.

Bickers described the Miami removal as “very personal” for himself and his mother. Thus far, the Miamis have been able to determine the names of only two of the tribe members who died during removal. One is their ancestor, Thomas Godfroy.

The removal is such a sad time for Miamis to think about, Tippmann noted. The Mass of Healing and Remembrance, she said, lifted people up and showed us the value of love.