On Thursday, Feb. 20, Bishop Kevin C. Rhoades celebrated a Mass at the Basilica of the Sacred Heart, University of Notre Dame, to pray for persecuted Christians. The Mass preceded the showing of a film on Christian persecution, sponsored by the Under Caesar’s Sword program at Notre Dame.

In his homily, the bishop noted the connection between St. Polycarp, a bishop and martyr of the second century, the film and the first reading of the Mass.  The connection was the city of Smyrna (modern-day Izmir) in Turkey. St. Polycarp was bishop of Smyrna. One of the persecuted Christians in the film was from Izmir and the first reading from the Book of Revelation was a message to the ancient persecuted Christian community in Smyrna.  Bishop Rhoades explained how the message of the Lord to the church in Smyrna, recorded in the book of Revelation, was a message that would have given strength and courage to St. Polycarp and can inspire persecuted Christians today. 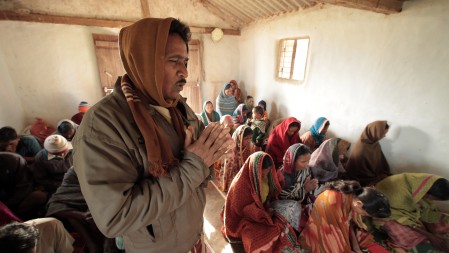 Under Caesar’s Sword is a collaborative global research project that investigates how Christian communities around the world respond when their religious freedom is severely violated. A Mass celebrated by Bishop Kevin C. Rhoades, and a showing of the short documentary film of the same name, took place at the University of Notre Dame Thursday, Feb. 23.

That message is: “Do not be afraid of anything that you are going to suffer.  Indeed, the devil will throw some of you into prison, that you may be tested, and you will face an ordeal … . Remain faithful until death, and I will give you the crown of life.”  The bishop recounted the martyrdom of St. Polycarp and his trust that, sharing in the chalice of Christ, he would rise to eternal life. The bishop urged all to pray for those today who share in the chalice of Christ those who suffer for their faith in Him.

“The foundation of Christian courage is trust that God is in control, that He cares for us and those we love and that He will save us — perhaps not from earthly death, however, as in the case of the martyrs,” Bishop said. “Instead, God promises the ultimate victory, eternal life.”

Following the Mass, many joined the bishop for the public viewing of “Under Caesar’s Sword,” a documentary detailing Christian persecution in the world today, focusing on the Middle East, Turkey and India. The “Under Caesar’s Sword” film is part of the larger Under Caesar’s Sword project, which explores the response of Christian communities to persecution. A collaborative global research project led by Notre Dame and the Washington, D.C.-based Religious Freedom Institute, it is housed within the university’s Center for Ethics and Culture. The project explores three key questions:

1. How do Christian communities respond to repression?

2. Why do they choose the responses that they do?

3. What are the results of these responses?

Other project initiatives include or have included a December 2015 conference in Rome that discussed the issue of Christian persecution; a public report of the team’s research discoveries that will be translated into four languages, an edited volume of essays describing the work of the scholars on this project; and curricula on Christian persecution.

In his introduction of the movie, the bishop talked about a conversation he had with a few years ago in Rome with the former Chaldean Catholic Archbishop of Mosul whose diocese was decimated by ISIS. ISIS expelled the Christians, most of whom were Chaldean Catholic, from Mosul and surrounding Christian towns. Some of the faithful were killed. Bishop Rhoades related how he asked the archbishop if any of the faithful denied the faith in order to save their lives and livelihoods.  The archbishop replied that there were none that he knew of.

Bishop Rhoades then offered advice on how fellow Catholics can support their persecuted brothers and sisters in Christ. He highlighted prayer and advocacy for persecuted Christians and other religious minorities and advocacy for international religious freedom. The bishop also encouraged generous material assistance through organizations that are assisting refugees escaping violence and persecution because of their faith, including Catholic Relief Services, Aid to the Church in Need and the Catholic Near East Welfare Association.

Daniel Philpott, professor of political science at the University of Notre Dame and co-director of the Under Caesar’s Sword project, also spoke at the event.

“Funded by a grant of $1.1 million from the Templeton Religion Trust, Under Caesar’s Sword began in summer 2014 with the formation of a team of about 15 scholars who traveled around the world to study Christian communities in many of the worst sites of persecution in the world,” he said in his remarks to the viewing audience. “The current phase of the project seeks to disseminate the results of their research, so that the world may be in closer solidarity with persecuted Christians.”

The Under Caesar’s Sword project is a pioneer in its realm of research.

In an interview with Today’s Catholic, Philpott described the group’s research.

“Generally we found that Christians respond to persecution through creative pragmatism,” he said. “They build bridges with other communities and find ways to keep their worship and basic activities going. Yet, they do this with creativity, courage, and a deep faith that one day, when the clouds have lifted, the church will enjoy a new springtime.”

The project team is optimistic that Thursday’s film event will help to spread a message of unity. Their hope is that the event would inspire people in the Notre Dame community and in the diocese at large to stand in solidarity with persecuted Christians through prayer and action.

The film was followed by a reception on campus.  An estimated 150 people attended the event.

View the film for free online at http://ucs.nd.edu/film/.