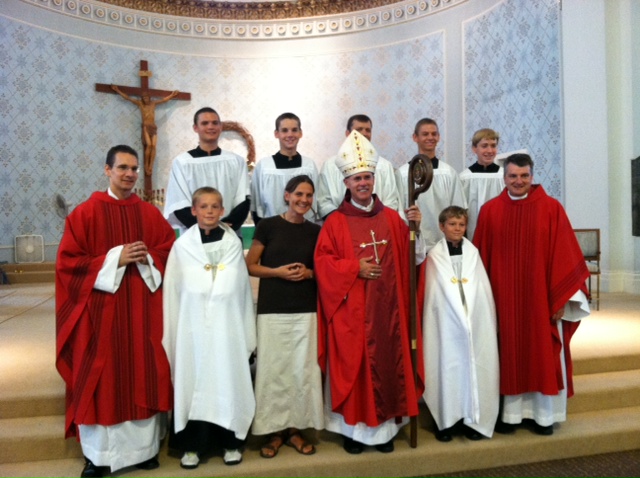 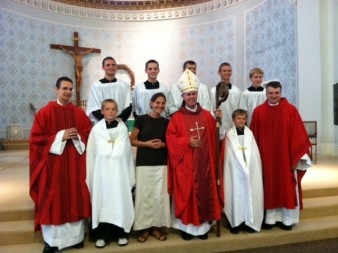 SOUTH BEND — Bishop Kevin C. Rhoades received the eremitic vows of Mary Elizabeth Kloska of Elkhart, during a Mass at St. Hedwig Parish in South Bend on Saturday, Aug. 27, in the presence of three priests, a master of ceremonies and immediate family members, their spouses and children. Having taken temporary (three year) eremitic vows, Kloska is now a professed hermit, the first ever in diocesan history.

“We have great reason to rejoice,” said Bishop Rhoades in his homily at the Mass of the Rite of Public Profession of the Evangelical Counsels for a Person Following the Eremitic Life, “for Mary becomes the first professed hermit in the Diocese of Fort Wayne-South Bend. The consecrated life of a hermit goes back to the early years of the Church. … Today, Mary embraces a station of life where she separates in some ways from the world to be more united with the Lord Jesus.”

Encouraging her assembled family he continued, “Be assured we can still talk to her, but most of her day will be spent in prayer.”

According to definition, a hermit withdraws from the world, and spends most of the day in seclusion and silence, praying and fasting. A hermit publicly professes the evangelical counsels of poverty, chastity and obedience, and follows a rule of life that the local bishop has approved. Kloska’s specific rule and vows reflect her vocation of being a hermit of “crucified love,” which means her “plan of life” is centered on Christ crucified.

Because Kloska’s vows reflected her dedication to the crucified Christ, the priest’s vestments during the rite were red, signifying the blood of Christ or martyrdom.

Bishop Rhoades, in his homily, said that St. Paul wrote that many in the culture think those following Christ are strange or foolish. But, he pointed out, “the foolishness of God is wiser than human wisdom.” — 1 Cor. 1:25

Kloska studied languages and theology at the University of Notre Dame, where she also played a role in starting Eucharistic Adoration on campus and a prayer group on the vocation of women. She graduated in 1999 and spent five months in a hermitage to discern her life’s work. She then contacted a priest she knew who was preparing to found a mission in Eastern Siberia. He spoke to his order’s founder and received permission for Kloska to accompany him and a religious sister the following year into Siberia, Russia.

During this time, Kloska stated that her particular vocation became very clear — “Jesus was calling me to live a spirituality of littleness, spousal love and the Cross,” she said.

From 2003 to the spring of 2011, Kloska lived as what she calls a “pilgrim hermit,” dividing her time between praying and serving the poor in missions and spending time of solitude in hermitages.

While in mission work she worked with the local bishop and lived within a parish or religious community that had invited her. Mission work varied greatly and included serving some of the more than 200,000 people living in trash dumps in the Philippines, caring for sick and orphaned babies in Tanzania and orphaned children in South Africa, giving retreats in Eastern and Western Europe, weeding gardens, visiting prostitutes and working on prayer teams.

Kloska insists that her most important work is prayer, and she sometimes spends up to seven or eight hours daily praying or in the presence of the Holy Eucharist.

In the spring of 2011 Kloska felt strongly that God was calling her to “somehow be buried even deeper in the Church.”

“Jesus had been showing me clearly over time how the greatest way I could touch and serve all those suffering … in the world is through more intensified prayer and less travel to physical missions,” she said.

She met with the bishop then to discuss her vocation.

The hermit’s life of silence and solitude is not absolute. Kloska will follow a plan of life daily including times of complete silence/solitude, but also allowing for times of “work,” which can include manual labor, language study, works of mercy if a dire need arises, personal spiritual growth, spiritual correspondence/direction with people seeking help, as well as occasionally giving retreats or talks, all under the direction of the bishop.

Bishop Rhoades summed up Kloska’s vocation: “(Mary) offers her life as bride and spouse of Jesus and as a prayer for others, as a prayer for the Church, for her family, for priests and for her spiritual children and all intentions the Lord places on her heart. I for one am going to be counting on her prayers.”