Flowers are one of the most popular Mother’s Day gifts. And the month of May is the perfect time to honor not only earthly mothers, but the mother of Jesus as well. What better way to honor Blessed Mother Mary than with flowers, as Catholics have throughout the centuries?

Some churches crown Mary with flowers and offer bouquets to her during ceremonies that take place early in the month, but there is an even older tradition of planting gardens dedicated to Mary. According to fisheaters.com, Mary gardens are “designed to be places of beauty that remind us of our Lord and Lady, allowing us to experience God’s creation, and inviting prayer and contemplation.” 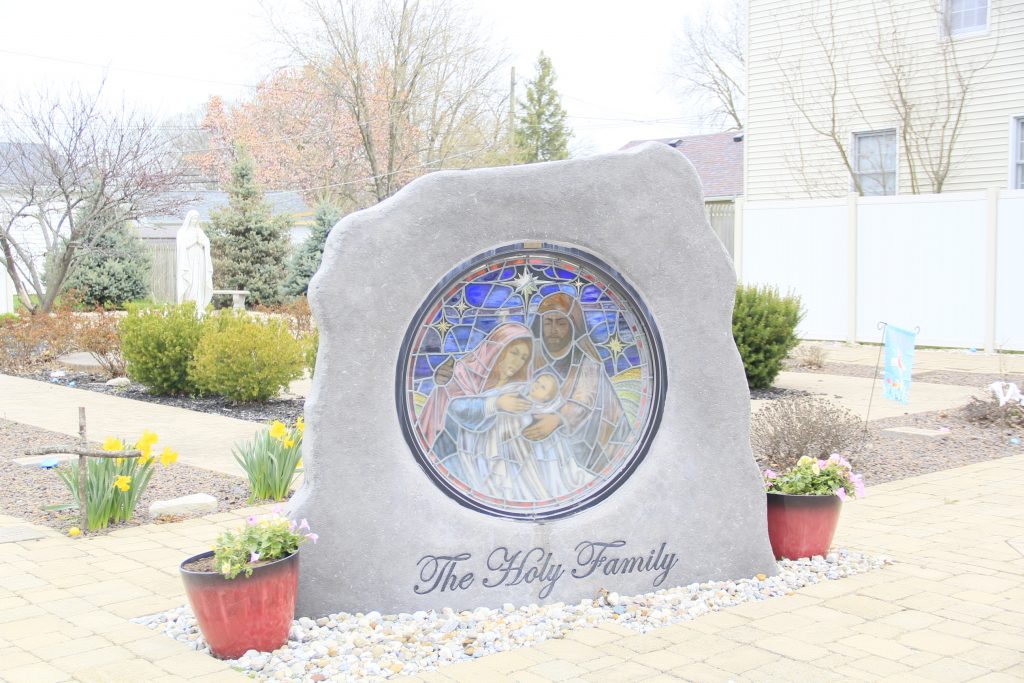 Photos by Jennifer Barton
Donated by a parish family, the Holy Family mosaic stone sits at the entrance to a rosary garden at St. John the Baptist, New Haven. The prayerful space was built and is maintained by parishioners.

Mary gardens are centered around a statue of the Blessed Mother, highlighting her roles as mother of the Savior and queen of heaven. While any flower can be used to honor Mary, some have particular significance in Catholic tradition. In the medieval times, many flowers native to Europe and even some discovered in America were given names that honored her.

One of the best-known Marian flowers is the rose. In the Litany of Loreto, approved in 1587, Mary is referred to as the “mystical rose.” Our Lady of Guadalupe gave St. Juan Diego roses to prove the validity of her apparition to the local bishops, and even the word “rosary” has the same root word and implies a spiritual bouquet for Our Lady.

Rose colors also have significance in Mariology: white to symbolize her purity, red for the sorrow of Jesus and Mary and gold for the glory God granted to her. A rose bush blooms yearly, yet some types require extensive care.

Numerous other flowers have connections to Mary and to Jesus. The evolution of speech during medieval times merged the words “Mary’s gold” into the commonly known name “Marigold,” for example. These small flowers resembled coins and were offered at the feet of Mary statues by medieval Christians, who rarely had real coins to give.

Lily of the valley is highly fragrant, blooms around Mother’s Day and is known as “Mary’s tears” for its bell-shaped flowers. Lilies of the valley are aggressive spreaders, though, so they require space that they can freely take over.

Delicate columbine is known as “Our Lady’s slippers” since the fallen spurs resemble slippers. There is a legend that columbine sprung from the ground beneath Mary’s shoes as she went to visit Elizabeth. The shade-loving bleeding heart — which looks exactly like it sounds — also brings to mind the wounded heart of Mary. Herbs such as rosemary, thyme and marjoram — among others — have Marian significance as well. 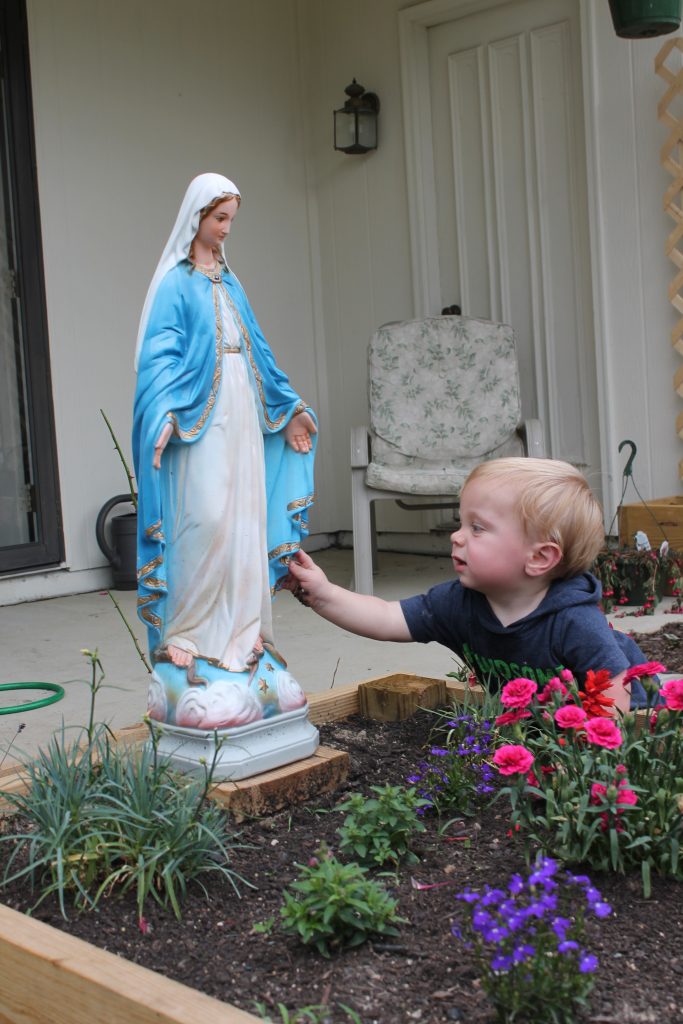 At-home Mary gardens can serve as a creative and visual means to instill devotion to Our Lady in young children, as well as bring beauty and a sense of peace to the home.

There are several factors to consider when planning a Mary garden. The first is space. With the use of pots, even a small porch or patio can become a prayerful space.

The second is plant type: annuals, which only live one season, or perennials, which come back year after year. Similarly, gardeners must consider hardiness zones before selecting flowers. The Diocese of Fort Wayne-South Bend falls into zones 5b-6a, which might necessitate more cold-hardy plants.

One enchanting example of a sacred garden space is the rosary garden at St. John the Baptist Parish in New Haven. Completed in 2014, the garden has become a neighborhood place for prayer and solitude.

Parishioner Michele Tutwiler maintains the garden, adding flowers and decorations each year. “It’ll be (several) hours in the day that I’m here, and I love it,” Tutwiler stated. “It’s my time with Jesus and with Mary.” Tutwiler has even enlisted her granddaughters’ help in painting decorative rocks to give the space color in the winter months.

The pathway is made of bricks donated by members of the parish and situated in a rectangular pathway around the statue of Mary, which is at the heart of the garden. The sponsored pavers present the prayers of the rosary, so that one can follow them and physically recite the rosary. The statue itself was part of one young man’s Eagle Scout project after the original statue fell and cracked.

The garden is truly a collaborative effort of the parish. The land for it and for the school playground was partially donated and funded by parishioners to give the church and school more space. Men of the parish poured the concrete and laid the paver stones. “Our Holy Name Society — a men’s group in the parish — do the spring and fall cleanup here on the grounds. They donated the money for these privacy fence panels,” Tutwiler said.

There are six rosebushes planted in the garden, two of which Tutwiler and her husband purchased. One is a yellow knockout, and the other is a lovely yellow-pink color. Another family donated a small tree for the garden. Many of the lilies, tulips and daffodils that are part of the garden were repurposed from the church’s Easter decorations.

Tutwiler spoke of several people she knew who come to the garden to pray, one of whom sits at “her” bench every day to pray. “We have neighbors who aren’t even parishioners, who aren’t even Catholic, and they still come here just to sit for a quiet time,” she said. She shared a story of one woman in the neighborhood who thanked her for having the garden space available. While the woman is not Catholic, she does believe in God and Tutwiler invited her to join the community at St. John. “She said she comes here often to pray and just to be with Mary and that this garden is absolutely beautiful. It brought tears to my eyes.”

Though St. John’s garden was mapped out, Mary gardens don’t require a great deal of thought or preparation. Amy Schortgen, member of St. Jude Parish in Fort Wayne, has her own sacred space on their property. “It wasn’t well-planned,” Schortgen stated. “We were gifted with a Mary statue from my in-laws, and my husband and I both like to have flowers and we wanted to showcase Mary.”

The garden evolved, growing bit by bit with additions such as daylilies from her father-in-law, a seating area and pergola. They try to have flowers for every season, including spring and summer blooms and mums for fall.

For Schortgen, her Mary garden is a stress-reliever. “Probably not until I had my own house did I get into gardening. It’s a great family project. Even the kids help us.”

A resource for advice on creating a personal Mary garden is the website fisheaters.com/marygardens.html or the Marian Library of the University of Dayton, which was founded by Marianist priests. Both list a multitude of flowers and their significance in Catholic tradition.