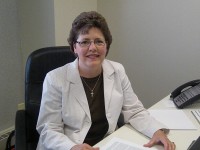 Marsha Jordan, shown in her office in the Archbishop Noll Catholic Center in Fort Wayne, is the new assistant superintendent of Catholic Schools for the Diocese of Fort Wayne-South Bend.

FORT WAYNE — Marsha Jordan’s philosophy of Catholic education is, “You’re able to teach the whole child —his body, mind, heart and soul. And you can infuse that into everything you do.”

This is a philosophy that has helped Jordan as an administrator, teacher and dean in her illustrious career in education. Now she brings this experience as the new associate superintendent of Catholic Schools to the Diocese of Fort Wayne-South Bend. Jordan took her post June 14 and has been busy studying diocesan programs.

She is preparing for a curriculum initiative workshop with Dr. Tom Doyle of the ACE program at University of Notre Dame. Doyle will be working with a group of teachers and administrators from diocesan schools and develop a process of writing curriculum for several areas, starting with social studies. With about 150 teachers and administrators involved, there will be week-long workshops at either Notre Dame or the University of Saint Francis. Those people will be the leadership team and take their workshop materials back to their schools and work with their faculties on continuing that process.
Jordan, her husband Denver and daughter Emily are parishioners of Queen of Angels Parish in Fort Wayne. Mrs. Jordan attended school there as a child, as well as Emily, who is now a sophomore at Bishop Dwenger High School. Jordan was a well-respected principal at Queen of Angels School for the last 10 years.
Jordan told Today’s Catholic, “I will miss the children,” but she feels the transition to her new post was directed by the Holy Spirit. “Something said, ‘You need to apply,’” Jordan said of this prompting, as well as some encouragement by Denver.

Dr. Mark Myers, superintendent of Catholic Schools for the Diocese of Fort Wayne-South Bend told Today’s Catholic: “Marsha Jordan brings a wealth of experience and credibility to the Catholic Schools Office. Marsha is a great Catholic woman who shares significant skills and ability. Our principals, teachers and pastors are very pleased with her appointment.”

Because Jordan’s experience is equally divided between high school and elementary administration and teaching, she was a very qualified candidate for the post.
Jordan is looking forward to working with the Prospective Principals’ Program, which, through a grant from Our Sunday Visitor in Huntington, recruits, educates and encourages Catholic school teachers for school administrative roles in the Catholic Schools. This program has created a pool of trained candidates when a school administrative post becomes available.

Jordan will also be working with the four diocesan Catholic high schools as they reorganize department chairs and offering some administrative skills to help with teachers’ supervision.

When Jordan graduated from Indiana University, she chuckled, “I had no idea where I’d go. But I was friends with a former Sister of Providence who had just accepted a job as a math teacher at Wawasee Prep. And they were looking for a biology teacher.”

Jordan contacted Crosier Father Tom Sheets at Wawasee Prep and was hired. “I taught biology and was dorm mother with my friend for two years,” she said. “And then the Crosier Fathers decided to close the prep school and concentrate their resources on other ministries.”

While working on her master’s degree at Indiana University that following summer, Jordan visited Father James Seculoff in Fort Wayne, who was superintendent at the time. Jordan was no stranger to the chancery staff at the time. As a college student, she worked one summer as a cleaning lady in the chancery.

Father Seculoff pointed Jordan toward a job that was open at St. Vincent de Paul School in Fort Wayne. She spent the next nine years there and taught religion, Latin and junior high science.

In 1984, Jordan left St. Vincent for a job as dean of girls at Bishop Dwenger High School. She taught biology part-time. Eventually, Principal John Gaughan decided to move Jordan out of the dean’s office and make her science department chair.

But in 1994, Jordan became a stay-at-home mom to raise Emily. “So I stayed home for six years,” she said. “I always try to tell my young teachers — and I know economic situations for families is different — for me, that’s a time that once it’s gone, it’s gone. And I wanted to experience every part of that.”

But during those six years, Jordan finished up her coursework for her administrative license. “I always thought I would go back to Bishop Dwenger. … (However,) in May of 2000, I got a phone call from a teacher at Queen of Angels.” The teacher encouraged Jordan to apply for a principalship at Queen of Angels School.
“That was my home parish. I had gone to grade school there. So I said, ‘Okay,’ and I talked to my husband about it and he said, ‘Sure, try it,’” recalled Jordan.
One of the teachers at Queen of Angels School had taught when Jordan was a student there, “and she sort of took me under her wing,” Jordan said.

“It was very personal to me,” Jordan said. “I’m one of eight girls. We all went through Queen of Angels. All except for a handful of my nieces and nephews went through school there. There were grandparents who were classmates of mine, whose grandchildren were in the school.”

She said it was very different than being an administrator in high school, “because you have to focus on every aspect, and try to keep all those balls juggling at the same time. I’m very proud of everything that we accomplished and the things the teachers were able to accomplish, because the school did grow.”
Jordan was principal of the school when her daughter attended Queen of Angels. At one point, Jordan stepped into covering a science class, “which was fine and I loved it,” she said. “I did teach my daughter in sixth grade. … It was more interesting to watch the other kids’ (reaction) with ‘Okay, how is she going to handle this?’”

Jordan has had opportunities to go to public school settings as a teacher or an administrator. She said, “I just had to look at myself as an individual and know how much my faith means to me and how much of a part of my day that is — my newsletters to my families and everything else — and I wouldn’t be able to do that.
“And I see that my role as an administrator in a Catholic school was not just the kids, not just the staff, but also the parents,” Jordan added. It was important for the parents to be catechized as well, “which in turn they could use to reinforce what their children are learning. And the whole part of that is those kids are the future of our Church. If we fail in that regard, where will our Church be?”

Jordan said she will miss the day-to-day life with the schoolchildren, but she plans to “go out and visit and spend time in each of the schools.”