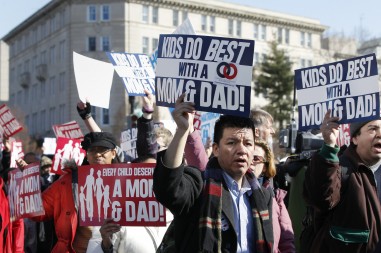 People demonstrate outside the Supreme Court building in Washington in this photo from late March, when the court heard oral arguments in two same-sex marriage cases. The court ruled as unconstitutional the federal Defense of Marriage Act, or DOMA, in a 5-4 decision issued June 26. In a separate case, the court sent back to lower courts a challenge to California’s Proposition 8, the voter-approved initiative barring same-sex marriage.

Upon hearing the news on June 26th of the Supreme Court decisions in the two Same-Sex “Marriage” Cases, I issued a public statement expressing my great disappointment on the decisions. I stated the importance of our ensuring that the state of Indiana continues to recognize and uphold the unique meaning of marriage as the union of one man and one woman. We must continue, and even redouble, our efforts to teach and advocate the truth about marriage for the good of children and of society.

The Supreme Court found the exclusion of same-sex couples legally married under state law from federal benefits (in DOMA Section 3) impermissible largely because it read DOMA as manifesting “animus” against gay people and targeting them for special disfavor. This argumentation is profoundly disturbing, suggesting that those who defend the immemorial understanding of marriage as the union of people of different sexes, ordered toward procreation, are anti-homosexual bigots. To suggest that people who support authentic marriage are prejudiced against people with same-sex attraction is disingenuous and shows a lack of tolerance and civility in this national debate. The Church affirms the dignity of all human persons and explicitly affirms that homosexual persons “must be accepted with respect, compassion, and sensitivity” (CCC 2358).

A few years ago, Cardinal Jorge Bergoglio, the Archbishop of Buenos Aires, now Pope Francis, advocated for the authentic meaning of marriage in his native Argentina. With a marriage redefinition bill on the horizon before the Argentine legislature, the Argentinian bishops, under the leadership of Cardinal Bergoglio, issued a statement teaching that “the union of people of the same sex lacks the biological and anthropological elements that are proper to marriage and family.”

During the national debate in Argentina, Cardinal Bergoglio boldly defended marriage, the natural family, and the right of children to have a father and a mother. He wrote: “At stake is the identity and survival of the family: father, mother and children. At stake are the lives of many children who will be discriminated against in advance, and deprived of their human development given by a father and a mother and willed by God. At stake is the total rejection of God’s law engraved in our hearts.”

I’ve been reading the book On Heaven and Earth, a very interesting book of conversations between Cardinal Bergoglio and Rabbi Abraham Skorka of Argentina on a variety of theological and social issues. In their discussion of same-sex “marriage,” Cardinal Bergoglio said that he considers it an “anti-value and an anthropological regression.” He explains that this is an issue that transcends religion. He sees same-sex “marriage” as a regression, that is, “a weakening of the institution that is thousands of years old and that was forged according to nature and anthropology.”

Despite the efforts of the future Pope and the Church in Argentina, the marriage redefinition bill passed in the Senate, making Argentina the first country in Latin America to redefine marriage to include two persons of the same sex.

In Argentina, Pope Francis had to engage with a hostile culture in confronting this issue and others, just as we are doing here in the United States. Pope Francis never made derogatory comments about people with same-sex attraction. Neither do we. We have a lot of work to do to evangelize our culture on the meaning of human love, sexuality, and marriage. Our message may not be popular, but we must preach the Gospel “in season and out of season,” as Saint Paul reminds us.

We have a long journey ahead of us in today’s cultural arena to persuade people about the truth and beauty of the Church’s teaching in these areas, teachings rooted in the natural law. We must work tirelessly on the new evangelization, which includes the promotion and defense of the truth and beauty of authentic marriage and the family, the first and vital cell of society, essential to the common good.

Through the intercession of Blessed Virgin Mary and Saint Joseph, may our efforts bear good fruit in this uphill battle!