DAVENPORT, Iowa (CNS) — Each of the 12 couples participating in a recent marriage preparation program at the St. Vincent Center in Davenport shared a common experience — one or both partners had been previously married.

“It’s super helpful to hear from other people who have been there,” said Tina Osmun, as she and her fiance, Brian Degen, headed to a session on stepchildren.

The couple, both 38, look forward to their April 25 wedding at Our Lady of the River Church in LeClaire, Iowa. They believe the remarriage preparation program, along with their annulment experience, has given them insight and resources to build a solid foundation for a sacramental marriage.

The program they participated in, “Two Become One: Embracing the Sacrament in Remarriage,” provided the framework for the 12-hour remarriage prep course, offered for the first time in the Davenport diocese.

“It is important that our Church offers those preparing for the sacrament of matrimony the most appropriate tools to help their marriages thrive,” said Marianne Agnoli, the diocese’s Marriage and Family Life coordinator. She researched several programs and observed “Two Become One: Embracing the Sacrament in Remarriage” in the Archdiocese of Dubuque, Iowa. She began recommending it to couples in the Davenport diocese. 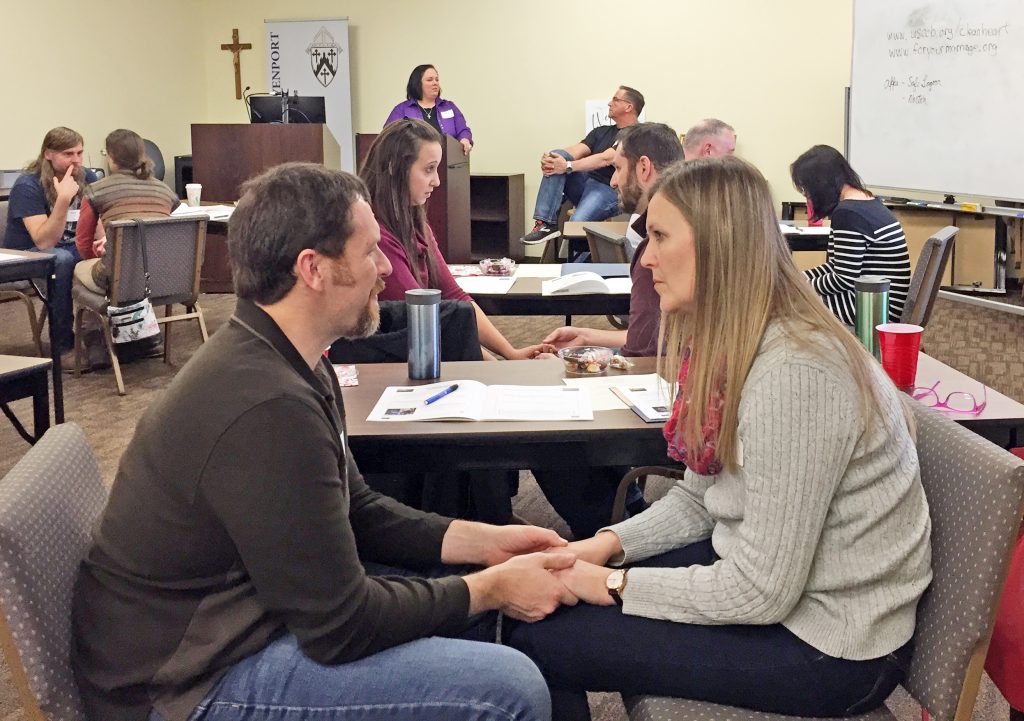 Carrie Van Mersbergen and Leo Bihn of St. Mary Parish in Oskaloosa, Iowa, participate in a communication exercise during the “Two Become One … Embracing the Sacrament in Remarriage” program at the St. Vincent Center in Davenport Jan. 25, 2020. (CNS photo/Barb Arland-Fye, The Catholic Messenger)

The program explores “topics unique to couples who have been married previously, such as barriers to a successful remarriage, the ‘ghost’ of the previous spouse, integration of two families, impact of the marriage on adult children/ grandchildren, finances in a blended family, “Agnoli said.

It also covers topics that all couples should discuss as they prepare for the sacrament of matrimony, such as marital spirituality, communication and intimacy.

During the Jan. 25 program, Father Thom Hennen, the chaplain at St. Ambrose University in Davenport, told the couples that to mirror God’s love requires grace, the grace that flows from the sacrament. “God will supply the grace through the sacrament of marriage to help you live out the marital covenant.”

John and Nancy Schmidt of the Archdiocese of Dubuque served as lead presenters. Steve and Jennifer Stefani from the archdiocese presented with them. Three other couples were in training and observing.

“We’re just so thankful to have a second chance at love,” John Schmidt told The Catholic Messenger, Davenport’s diocesan newspaper, in explaining why he and Nancy lead this program. They want to train other couples to ensure that all couples entering the sacrament in remarriage receive the enrichment they need.

“Helping others to see marriage as a sacrament is important to us,” Jennifer Stefani said.

Jerry and Renee Guinan of Sacred Heart Cathedral in Davenport were among the couples in training. “I think it’s a great experience and a need in the community for people who are entering a second marriage,” Renee said. “Especially in light of the statistics regarding remarriage and blended families,” Jerry said.

The day’s program provided the Guinans with a good review and ideas for their marriage of more than years, Renee added. “God has blessed us with a sacramental marriage.” She and Jerry want other couples to experience what they experience.

Brandon Hinnenkamp and Alicia Freihammer of St. Thomas More Parish in Coralville, Iowa, appreciated the customized approach of the remarriage preparation program and the strategies and resources provided.

Brandon has been married previously. Alicia has not. Hearing about other couple’s situations regarding remarriage was helpful, she said. “We’re not alone; this is something other people go through,” Brandon said.

Rob Arth and his fiancee, Terese Benvenuto, said their pastor, Father Tony Herold of St. Paul the Apostle Parish in Davenport, encouraged them to participate in the remarriage program.

Both of them discovered during their annulment process that “you need God and his grace that comes through the sacrament,” Rob said. “He needs to be at the center. He does have to be first. I think we figured that out, but today (the remarriage preparation program) affirmed it.”

“One thing that really seemed to stand out with this group of couples was the acknowledgment of the importance of keeping God at the center of their relationship,” Agnoli said. “Several couples commented that this had not been the case in their previous marriage, and they wanted things to be different this time around.”

From this first presentation in Davenport, she also recognized “the importance of having team members who have experienced death/divorce in a previous marriage to serve as hope that a healthy, thriving, Christ-centered remarriage is possible.”

Arland-Fye is editor of The Catholic Messenger, newspaper of the Diocese of Davenport.