WASHINGTON (CNS) — Political commentator Mark Shields, who died June 18 at age 85, often wore his Catholic faith on his sleeve in his columns, commentary and talks around the country. 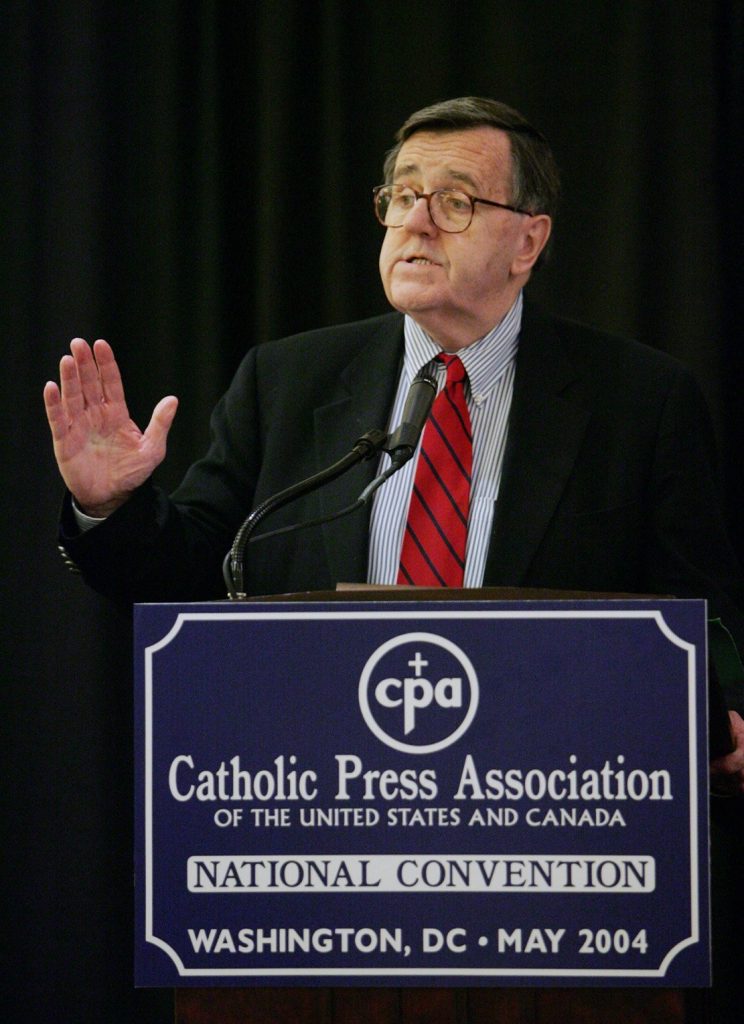 Political commentator Mark Shields talks about presidential campaigns in an opening address to the Catholic Press Association’s annual meeting in Washington May 26, 2004. Shields provided weekly political analysis and commentary for the PBS “NewsHour” from 1988 to 2020. He died June 18, 2022, at his home in Chevy Chase, Md. He was 85. (CNS photo/Nancy Wiechec)

Shields, who died of complications from kidney disease at his home in the Washington suburb of Chevy Chase, Maryland, was known for his wit and his genial presence on television, where he hosted “The Capital Gang” on CNN and appeared frequently on PBS’ news programming.

He provided weekly political analysis and commentary for the PBS “NewsHour” from 1988 to 2020.

Born in the Boston suburb of South Weymouth, Massachusetts, in 1937, Shields was steeped in the New Deal political values of his family, and read as many as five newspapers a day. He earned a bachelor’s degree from the University of Notre Dame in 1959, then served in the Marines for two years.

After a few years working in the TV industry in Los Angeles, Shields moved to Washington. He became a top Democratic strategist, directing winning election campaigns before turning to political commentary. He joined the editorial board of The Washington Post in 1979 and in time became a syndicated columnist who soon was in demand on TV and at conferences.

Almost like the swallows returning to Capistrano, rare was the Catholic Social Ministry Gathering in Washington that did not feature Shields talking about contemporary political topics.

In 2004, he suggested that likely Democratic presidential nominee John Kerry spend the next six months in a Benedictine monastery because it would leave President George W. Bush as the only visible candidate on whom attention could focus. “If the election becomes a referendum on Bush, Kerry can win,” Shields said. “If it’s a referendum on Kerry, Bush can win.”

The year before, as war loomed with Iraq for the second time in 12 years, Shields, criticized what he called a “spectator-sport” aspect of the current situation, in which he said only one member of a Congress who was backing the administration’s push toward war had a child serving as an enlisted member of the military.

“The strength of any nation will be determined by its will and resolve to stand together for common sacrifice,” he said.

But the rich and powerful people of the United States aren’t even being asked to sacrifice a tax cut, he said, let alone risk the lives of their sons on the front lines of battle. “Too often in recent American politics, the question is, ‘Are you better off today than you were four years ago?'” Shields said. “The question we should be asking is, ‘Are WE better off?’

Shields was an admirer of Pope Francis. In 2015, more than six months prior to the pope’s U.S. visit, he said, the pontiff “has a message which makes both sides uncomfortable.” The papal address to a joint session of Congress is “going to be unlike any State of the Union address we’ve ever see,” he added.

He imagined watching “(then-Vice President) Joe Biden and (then-House Speaker) John Boehner, both Catholics (but from different political parties, Democratic and Republican, respectively), figuring out when to stand and applaud.”

In 2014, a month before Pope Francis and then-President Barack Obama were to meet at the Vatican, Shields said he hoped the summit would provide a chance for Obama to learn something.

“If there’s an anti-insular pope, Pope Francis embodies that,” he said, while quickly turning his observation into a jab against Obama, whose contacts, he said, “are limited to those in the 312 area code,” meaning Chicago. Shields said the pope was a natural communicator and someone who has “brought a sense of communion and communication unrivaled in my lifetime.”

But Shields, as frequent a guest as he was at the Catholic Social Ministry Gathering, did not limit his appearances to that forum.

Speaking at the 2004 Catholic Press Association convention in Washington, Shields said it is a “tragedy of politics” that both political parties had become dedicated to appealing to individualism.

He said that the Democrats come from the perspective that all individuals are autonomous and entitled to live as they choose without regard for the concerns of the broader society and that Republicans adhere to the notion of economic individualism, where the overriding goal is to reduce how much individuals are expected to contribute financially to society.

Neither party is emphasizing goals for the nation that focus on justice for those in need, for the working poor and for those who can’t afford to be hospitalized when sick, Shields said.

In 2009, he weighed in on Notre Dame’s invitation to Obama to speak at the school’s commencement exercises. “As a proud graduate of Notre Dame and, frankly, as an admirer of (university president Holy Cross Father John) Jenkins, I am not an uninterested bystander in this controversy,” Shields wrote in his column.

At least 70 U.S. bishops and other critics said Obama’s support of legal abortion and embryonic stem-cell research made him an inappropriate choice to be commencement speaker at a Catholic university.

Shields defended Obama as a “major political leader,” not a “champion of legalized abortion.” He argued that while Obama is decidedly “pro-choice,” other issues such as the economy, health care and the Iraq War “are more important to Obama.”

During a 2013 “Francis Factor” roundtable at Georgetown University, Shields said of the first-year pope, “I cannot think of a single public figure, whether secular or religious, who has inspired the level of civil discourse and substance and exchanges that this man has in just six months. It is remarkable.”

He added, “Francis brings that sense of joy, the good news of the Gospel. Most of all, he asks the question, not are you better off than you were, but are we better off. It’s a message we need desperately in this country and in this world and I’m grateful for it.”

In a 2002 column, he took the Democratic Party to task for including a link to Catholics for Choice on its website; it was the only Catholic organization with a link on the site. Shields called this “a deliberate act of political bigotry” and said it was the equivalent of the committee “daily telling Catholic voters to get lost.” Soon afterward, the party added links to three more Catholic groups’ websites.

And in 1990, Shields issued a rejoinder to those who accused the U.S. bishops of “meddling” in public policy debates on abortion.

In 1886, Shields noted, Cardinal James Gibbons of Baltimore supported transit workers striking against a 17-hour workday and was criticized by The New York Times for “meddling in nonchurch affairs,” Shields said.

“The nation’s Catholic bishops have continued to meddle in nonchurch affairs,” Shields said, listing their criticisms of President Ronald Reagan’s policies affecting the poor, their endorsement of a nuclear freeze and their support for limits on funding for the Nicaraguan contras.

Shields’ survivors include his wife, the former Anne Hudson, a lawyer and federal official. The couple was married for 55 years. He also is survived by their daughter, Amy Doyle, and two grandchildren.