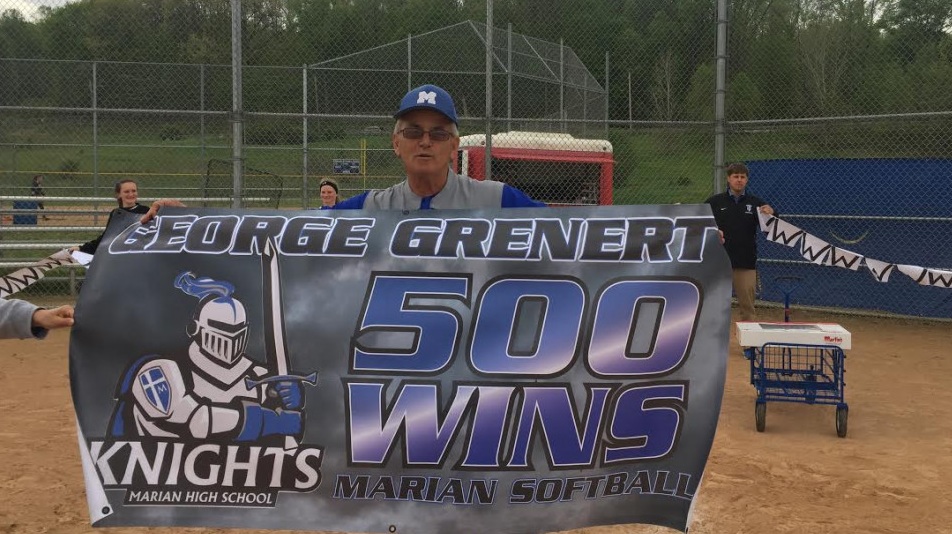 This past season, Marian High School’s softball coach reached a milestone that few coaches do, when he experienced his team’s 500th win.

The victory came on April 24, after George Grenert’s Marian Knights beat the New Prairie Cougars by a score of 7-0. Grenert credits endurance for his team’s overall coaching success, especially since when he took over the program in 1989, the Mishawaka Catholic high school didn’t have a strong softball program.

“At Marian, we weren’t known for winning a lot of softball games in our earlier years,” said Grenert with a laugh.

In fact, the team didn’t have a winning season until his seventh year as coach, which is why Grenert said one of his highlights as a coach was losing to powerhouse Penn High School in the sectional championship 3-2; because that showed they could compete with the best teams.

Since then, Marian softball has gone on to win two Indiana state regional titles, as well as earn an appearance in the state finals — a great accomplishment for someone who didn’t initially aspire to be a coach. He was just a guy who liked fast-pitch softball.

“I’ve always had a fascination with softball, even as a kid,” said Grenert. “I played softball. It’s probably not so obvious anymore, but there used to be a lot of softball leagues around with fast-pitch.

“I went into high school and played baseball for a couple of years. Then, after high school, I didn’t go on to an illustrious career in baseball, but still played softball in my younger years. So (coaching) was just kind of a natural thing for me.”

Grenert decided to apply for the position as the head softball coach at Marian after it was suggested to him by his stepson and then-girlfriend, who were over at Grenert’s house. At the time, she was a softball player at Marian.

“Her coach had resigned and in our conversation, they said ‘George, you should go apply for that job.’ I did, and here we are.”

Since he had chosen a career in construction and did not work at Marian, Grenert had to deal with some obstacles to coaching.

“How did I ever find the time to go get the fields ready to play and everything else? I would always make arrangements with my employers so that I could leave at 3 p.m. Games were at 4:30 p.m. back then.” In the time between leaving work and the start of his team’s game, he would have to rake and drag the field, line the field, make sure his players were ready and make that day’s lineup.

The hoops he had to jump through didn’t go unnoticed by his players.

“I think George teaches a lot of things about life,” said Jamie Young, who played softball at Marian from 2010-14. “I think the most important things he teaches are through his example. He shows how to enjoy the wins and how to overcome the losses. He taught me to be proud, but always stay humble.”

“He was a good coach but an even better person,” said Kelsey Keilman, who played softball at Marian from 2011-15, “like a grandpa to his players.”

Four years ago Grenert retired from his construction job, allowing him to spend more time with his family, which has spread across the country. However, he isn’t able to see them much during softball season and has missed the majority of his older grandchildren’s spring sporting events. That’s something he plans to change soon.

“The end is near,” said Grenert, in regard to his coaching career. He won’t say exactly when he’ll retire, but after 500 wins there isn’t much left for him to accomplish besides continuing to be the man his players, family, and the Marian community know and love.