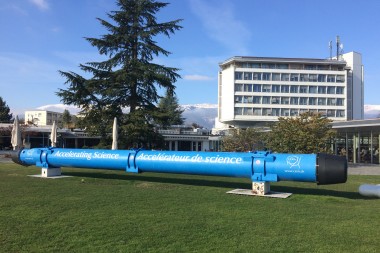 An LHC magnet is displayed on the grounds of CERN, the European Organization for Nuclear Research, in Geneva, Switzerland. Marian High School senior James Twaddle visited the facility and performed an experiment there last fall.

A senior at Marian High School in Mishawaka was invited to Switzerland last fall to participate in an experiment that few physicists will have the chance to experience during their lifetimes.

James Twaddle, 17, traveled to Geneva to use the legendary particle detectors located at the headquarters of the European Organization for Nuclear Research, or CERN. The opportunity surfaced because he was a standout participant in the University of Notre Dame’s summer particle physics program known as QuarkNet.

CERN is perhaps most well known for its involvement in the discovery of the Higgs Boson. “For a Ph.D. physicist to go to Geneva to do research at CERN would be a coup,” said Rebekah Randall, Twaddle’s physics teacher at Marian. “But for a high school student who hasn’t even completed one year of physics to not only visit but to do research there (is) exceptional.  Unheard of, perhaps.” 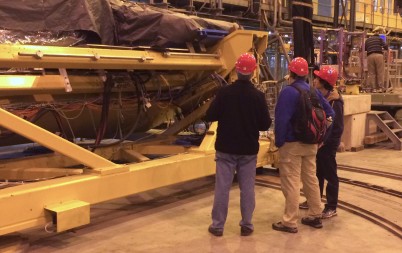 James Twaddle, right, tours the European Organization for Nuclear Research, or CERN, facility with Brian Dolezal and John Taylor, his instructors at QuarkNet. QuarkNet is a science program in which the University of Notre Dame participates.

Twaddle traveled to Geneva with his two instructors from QuarkNet, Brian Dolezal and John Taylor, both local high school teachers. The research project they worked on wasn’t necessarily cutting-edge science, but it was visual; and the opportunity to use the equipment at CERN was very informative.

Perhaps the best part of the trip, they said, was the opportunity to be around some of the best physicists in the world and observe them interacting with each other.

“It’s the holy grail of science: the most important experiment on the planet,” said Dolezal, a teacher at Saint Joseph High School in South Bend. “You have thousands of scientists from around the world, and what’s really impressive is that the physicists may be working with someone from a country who does not speak the same language as them.”

Twaddle was able to learn from the world-renowned scientists as well.

“We were fairly busy with the experiment and weren’t able to go into the city of Geneva too often, so we spent a lot of time in the CERN cafeterias,” said Twaddle. “While sitting there, I could overhear the conversations of people talking about what experiments they were doing and what theories they had. Having that constant contact and hearing and learning about particle physics for that long was fantastic.”

The three visitors group set up an experimental device that showed collision data from a diverted piece of the main particle stream. They discovered some new and interesting directions in which to go for further research, directions future students will be able to use as they continue to study the subject.

In addition to having a wonderful, once-in-a-lifetime experience, Twaddle also discovered a mature understanding of and fascination with physics.

“What I find interesting about physics is its ability to describe and discover the entire physical universe around us, and maybe even other ones that we can’t touch,” said Twaddle, who is interested in declaring physics as one of his majors when he goes to college next year. “And it describes all of this purely through human intuition and mathematics. I just find a great fascination with being able to not only describe the physical world with numbers, but also to discover new things about it that we could never touch or measure ourselves.”

This is the kind of attitude those around him seem to have come expect from Twaddle.

“James is a great physics student — hard-working and careful, thorough with his answers. He’s one of the top in his class, but he is also kind and helpful towards others,” said Randall.

“Sometimes it’s difficult (for him) to work with other students, especially in a group situation where he understands something and they don’t. (But) James is always supportive and engages in discussion with his peers, helping them understand ideas without making them feel slow on the uptake.”