When he named Our Lady of Lourdes the patroness of Marian High School in Mishawaka, Bishop Kevin C. Rhoades gave wings to Annie Ganser’s longtime dream.

The chairman of Marian’s Learning Strategies Department since 2007, Ganser and her colleagues help about 50 students who have mild learning disabilities with individualized service or Catholic accommodation plans. The students are working toward academic diplomas, but need a little extra help along the way. They are part of Marian’s “history of trying to serve the needs of all our students,” as principal Mark Kirzeder put it, “and they add a richness to our community.”

However, Ganser and Kirzeder also have a heart for members of the extended Marian family who have more moderate cognitive disabilities that prevent them from earning regular diplomas. Those students shouldn’t be excluded from a prayerful Catholic educational environment, they feel.

During a strategic planning process two years ago, Ganser and Kirzeder identified learning strategies as one of the school’s strengths — and “an opportunity to engage more fully in our Catholic mission,” in Kirzeder’s words — “following Jesus as teacher and servant.” 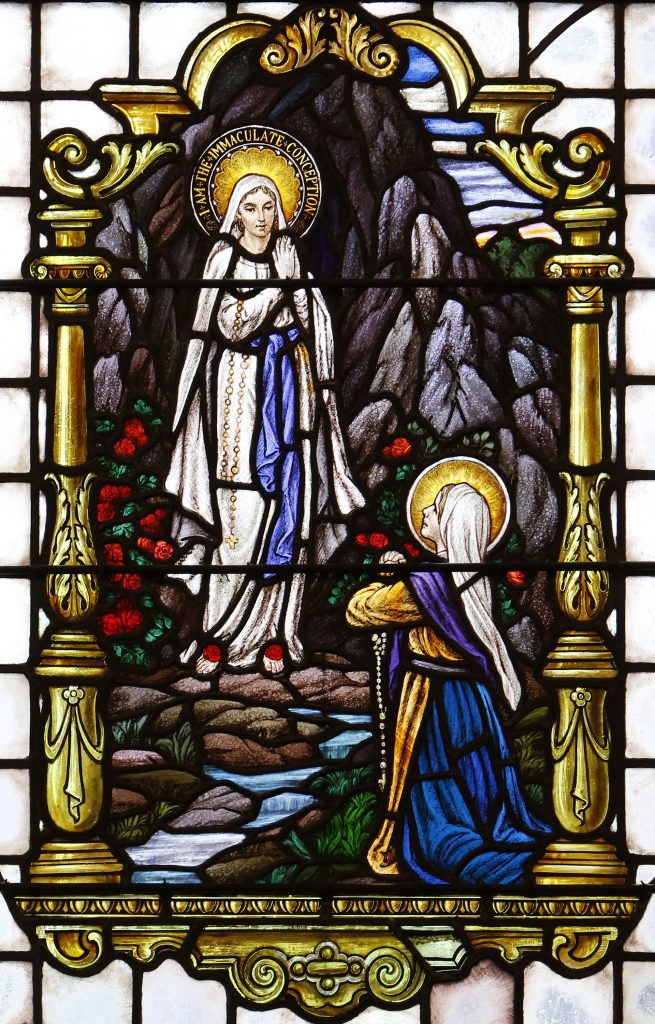 This stained-glass window at St. Mary Church in Manhasset, N.Y., depicts Mary appearing to St. Bernadette Soubirous in Lourdes, France, as the Immaculate Conception in 1858. Pope Pius IX proclaimed in 1854 that Mary was conceived free of original sin. The solemnity of the Immaculate Conception, the patronal feast of the United States, is celebrated Dec. 8. (CNS photo/Gregory A. Shemitz)

After the bishop named Our Lady of Lourdes their patroness, construction began on a grotto and the school planned a 2020 pilgrim his community also tried to learn more about the apparition. They discovered that the girl to whom Mary first appeared at Lourdes in 1858, St. Bernadette, had learning difficulties and trouble mastering her catechism — a fact that made her declaration that she had seen the “Immaculate Conception” far more credible, since she seemed unable to manufacture or understand the title.

All the funding is not yet in place, but next fall Marian hopes to begin admitting yearly a cohort of three to five “Bernadette Scholars” with moderate disabilities such as Down syndrome. They will join other Marian freshmen for some classes and also take specialized classes designed to maximize their independence in the future. “They will bring our community so much!” Ganser exclaimed. “They will teach us all a great deal about life and God’s love.”

Ganser became interested in special education because of an older sibling whom she never met. Born with hydrocephaly, spina bifida and other problems, the sister did not live very long, but her parents lovingly kept her memory alive.

After earning degrees from Ball State and IUSB, Ganser taught public school students     with severe intellectual, emotional and physical disabilities. At the time, Catholic schools were unable to serve those with special needs. Then the principal of St. Monica School, now part of Michiana Catholic School, approached her about a new full-time position as a resource teacher. As things evolved, she was eventually pulled over to Marian High School.