The bishop explained that he originally planned to visit Marian on the actual feast day of Our Lady of Lourdes, Feb. 11, but then was honored to accept an invitation to concelebrate the installation of Bishop Robert J. McClory of the Diocese of Gary on the same date. A week later, he told the students he was very glad to be with them: He also acknowledged two former principals of the school, Secretary for Education Carl Loesch and Superintendent Dr. Joseph Brettnacher, who were present for his visit, along with current principal Mark Kirzeder.

During the homily, the bishop spoke about the first miracle in St. John’s Gospel — the Wedding at Cana. He said that at first glance, it seems a relatively simple miracle to be presented as Jesus’ first.

He went on to explain that having abundant wine at a wedding was a sign of joy and plenty, which is what Christ wants to bring to us.

“Now it’s important to notice that Jesus didn’t do the miracle at Cana completely on His own. He did the miracle at the request of His mother. It’s not insignificant that it was Mary who noticed that the wine had run out,” the bishop said. “Mary didn’t tell her Son what to do about it, but she believed that He could indeed do something about it.

“Keep in mind, up to that moment, Mary had not seen Jesus perform any miracles. She obviously believed He could. She had faith in His supernatural power and believed He could help. Mary says to us as she said to the waiters at Cana — ‘Do Whatever He tells you.’”

He shared with students that he once served at a parish in a neighborhood where there were many evangelical Christians, and they would often ask him if he had accepted Jesus as his personal savior. He always replied that he had, and he does so every day.

He started asking them, ‘Have you accepted Mary as your personal mother?’ That gave him the opportunity to talk about Jesus giving Mary to John and to us on the cross, and Mary’s role as mediator at the wedding feast.

“Mary is our spiritual mother. Under the title of Our Lady of Lourdes, she is your patron and mother here at Marian High School,” he said. 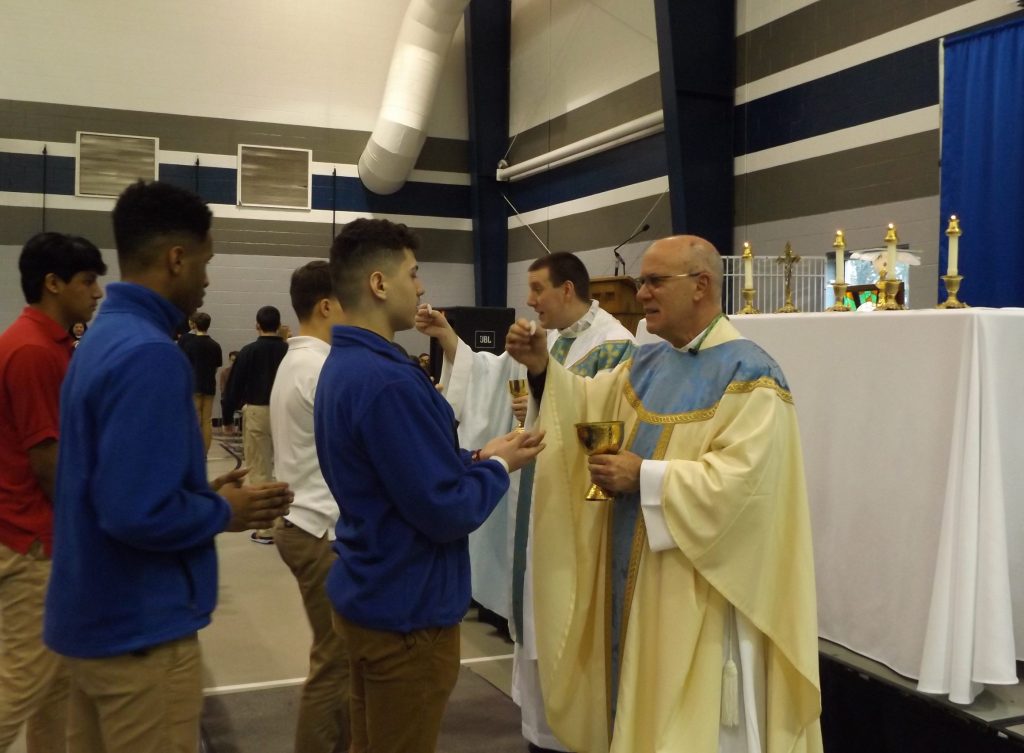 Students receive holy Communion during a Mass celebrated by the bishop and concelebrated by chaplain Father Nathan Maskal Feb. 18.

He reminded the students that Mary intercedes for us like she did for the young couple at the wedding. Those who refuse to welcome Mary into their lives miss something very beautiful, he added, and he encouraged them to deepen their devotion to Mary through actions like praying the Hail Mary or the rosary, wearing a scapular or Miraculous Medal and having a Marian image in their bedrooms.

“May Our Lady intercede for all of you and for this wonderful Christian community of Marian High School!” he said. “I pray we go forth from this Mass, strengthened by the graces of the Holy Eucharist, to heed the words of Mary: ‘Do whatever He tells you’. If we do, our lives will be changed like water into wine. We will have life and have it to the full. That’s what Mary desires for us — friendship with her Son, our salvation!” 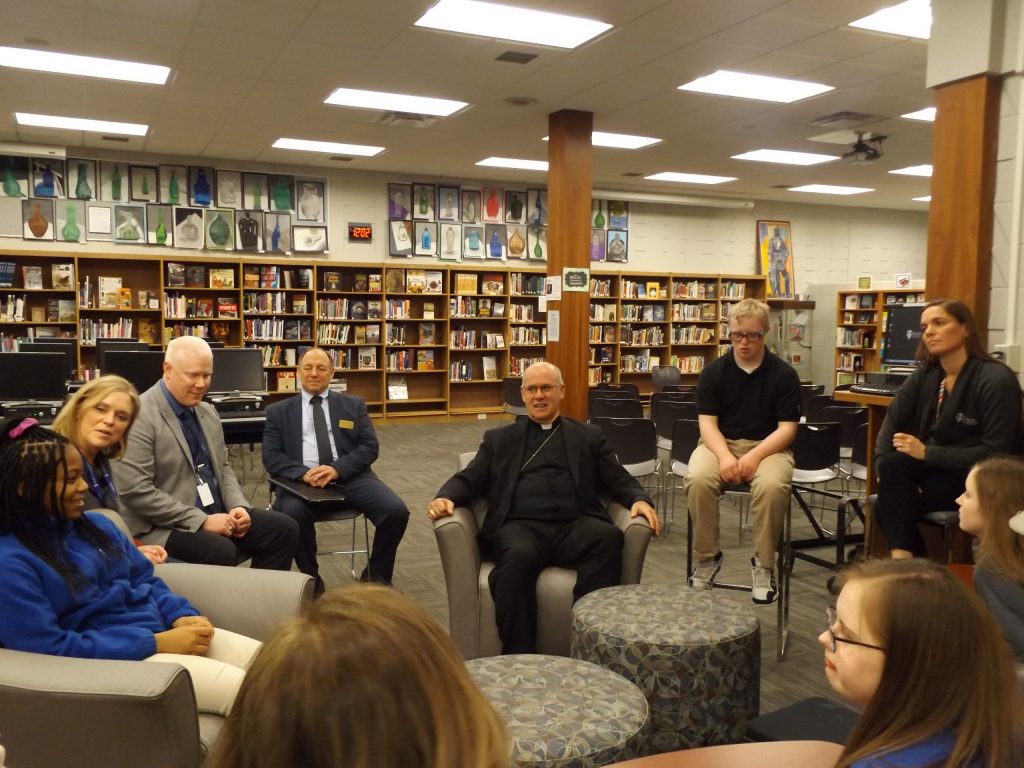 Success for all students

Marian has 644 students currently enrolled. This year, the school initiated the Bernadette Scholars Program for students with special needs. Led by Annie Ganser, the program is an extension of the Learning Strategies Center that creates individualized educational plans for each student. The Bernadette Scholars are mainstreamed for at least one class a day; they also participate in school events and activities, liturgical services, sports and clubs to gain the social and emotional benefits of being an active part of the Marian family.

The name “Bernadette” was chosen for the program because the school’s patroness, Our Lady of Lourdes, appeared to a young girl named Bernadette in 1859 In France. Bernadette is believed to have had a cognitive disability.

Although the Bernadette Scholars are not on a diploma track, they will receive certificates of completion at the end of their high school careers and be part of commencement exercises.

Marian offers a dual credit program for its mainstream students, and 87% of last year’s graduating class received some college credit — up 2% from the previous year. Kirzeder explained the school has partnered with several local colleges including Holy Cross, IUSB and Ivy Tech to certify Marian’s teachers and curriculum so they are at the “same standard as those college professors” to enable students to get the college credit. Thirty-four classes that are offered for dual credit, and of the seniors who received a dual credit last year, 57% received one semester of college credit and 48% received two semesters. “The students have to qualify to take the class, but then we work with them to make sure they at least get some college credit,” Kirzeder said.

Dance said the credits are recognized at all Indiana state colleges and some other state and private colleges as well. “At the same time, we continue to have our AP classes. This (dual credit) didn’t replace it, it runs alongside it.” Students take the AP test in May and also can receive college credit, depending on their score.

Excelling in service, science and art

The school continues to encourage community service with its Knight’s Service Day in October.

Every student, along with staff and parent volunteers, travel to pre-determined locations to volunteer. Last fall, 50 different organizations or homeowners benefitted from the work performed by the volunteers. Dance said the idea is to get the kids out in the community, making those connections and hope they build relationships and continue to serve.

This school year is the first for the Service Learning Curriculum. Kirzeder explained that new state requirements offer different pathways to graduations, and one, the Service Learning Curriculum, will be available to the Class of 2023. Marian, however, was allowed to implement it earlier. Years one and two have been developed and administrators and teachers are working on the third and fourth years. Students will be asked to reflect on the service they perform and integrate it into their lessons.

“Our goal is we will meet the requirements without sacrificing our Catholic identity and high academic rigor. That’s what differentiates us from public schools,” Kirzeder said.

Marian also is known for its science and art programs. Those with an interest in science are blessed to be able to use resources at nearby colleges and universities.

“They’re doing very well with the help of college professors and are turning in world-class projects that are then entered into national and international science fairs,” Dance noted.