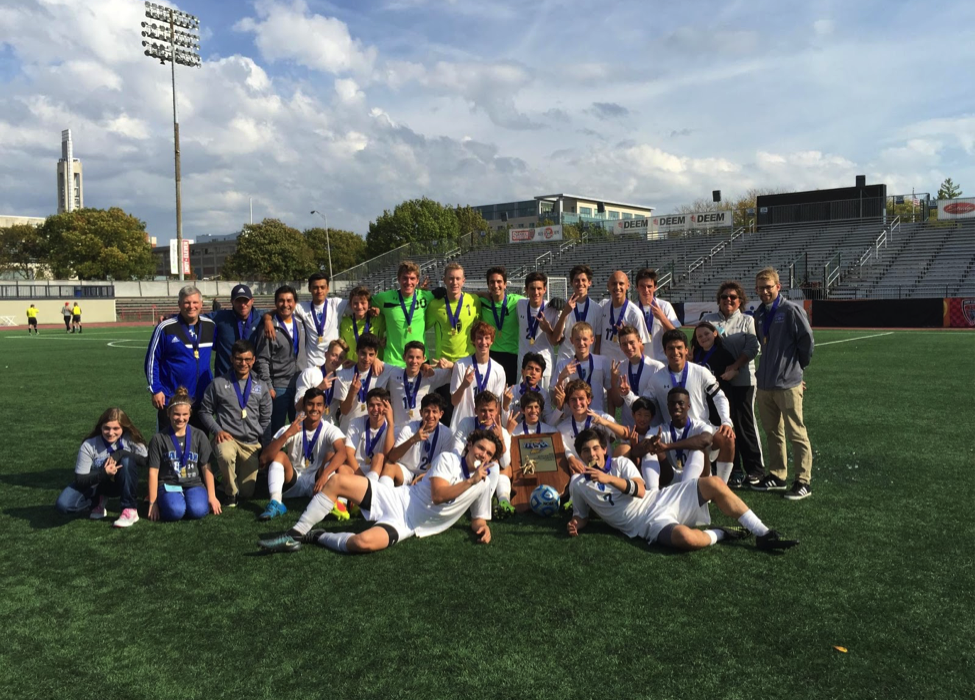 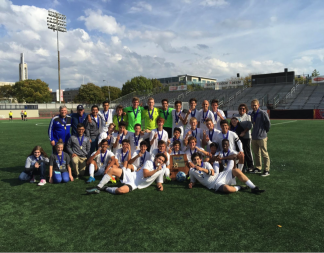 It was both tricks and treats this past Saturday for the Marian High School Knights boys soccer team, as they headed to IUPUI’s Michael A. Carroll Stadium to defend their 1-A soccer state championship title. While kids across the country donned their Halloween costumes, the Knights put on their crisp, white and blue soccer uniforms in hopes of taking home the ultimate treat, a 1-A soccer state championship trophy.

With a 20-2 record and a state title in the 2015 season, the 2016 team had much to live up to. Despite last year’s success, the Knights approached this year as an entirely new season with its own set of challenges and opportunities. 2016 was a new year with a new team. A number of outstanding seniors graduated at the end of the 2015 season, paving the way for new stars to step onto the field. And they did, with an outstanding 18-5 season this fall that carried them back to Indianapolis to defend their state title.

As the state championship began, it only took a few minutes of game play for it to be clear who would dominate the field. Early in the game, Marian had two scoring opportunities. After a foul, Christian Juarez was given a free kick, which was saved by the Providence goal keeper. Minutes later, Juarez faced a scoring opportunity and fired another shot. The ball flew mere feet above the Providence crossbar. The Knights’ offense was on fire.

The Knights scored their first goal in the 34th minute of gameplay. Robert Ontiveros received the ball from Alex Rodela and knocked it into the net.

Just two minutes after the intermission, the Knights struck again. Johnathan Tavarez sent the ball into Providence’s box. It was picked up by Jordan Morris, who found himself in a two-on-one situation, shot and scored the goal.

Morris wasn’t done yet: 20 minutes into the second half he scored his second goal, with an assist from Edward Morrison. The score was now 3-0.

Throughout the game, Renner made five saves. With 12 minutes remaining in play, Renner was replaced by Michael Caltaldo, who successfully prevented a Providence goal.

Marian secured its victory with a fourth and final goal 66 minutes into game time, when Jonathan Tavarez scored, unassisted. In a decisive victory, the Marian High School varsity soccer team had successfully defended their 1-A soccer state championship title.

Marian Coach Ben Householter shared that the team was all smiles after their win. “The team played very well on Saturday. They stayed focused on defense and kept working offensively.”

He continued: “My proudest moment of the postseason is just seeing how hard this team worked and seeing them come together as a team to accomplish their goals.”