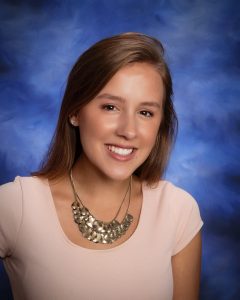 Life is far more than just skating through school to achieve perfection for Margaret Cook. The Marian High School salutatorian was touched by fear at an early age, like most adolescents, but unlike most, she looked at her life through the lens of her faith. That foundation she received as a child carried her through the halls of high school as a freshman.

“When I began high school in August of 2015, I was terrified and turned to God to help me navigate the halls of Marian High School. Four years later, I can look back and laugh at how frightened my 14-year-old self was of the small building that I had spent years navigating during art and dance camps as a child; however, without faith that God would keep me safe and connect me with amazing friends, I likely would not have acclimated quickly to Marian.”

Her faith is intricately woven into every aspect of her life. Cook noted that her participation in Marian’s Annual Service Day inspired her to use her talents and hobbies for a greater good: She volunteered at the Women’s Care Center, with adults with special needs at ADEC and with students at local grade schools. “These opportunities that Marian gave me allowed me to show my community just how valuable my faith is to me,” she said.

One of her avocations is crocheting, because its rhythmic patterns are calming and help her relax. As a member of the National Honor Society, Cook formed a group of students who crochet hats and scarves for Catholic Charities – another testament to her faith in action. She also faithfully offered her time as an altar server at her home parish, St. Matthew Cathedral, for six years.

Her hobbies include playing banjo, piano, guitar and ukulele. The outdoors, especially walking and exploring the woods close to her home, also is dear to her.

A life-changing experience for her happened during her junior year. Cook joined Marian’s Advanced Science Research class and Research Team, where she connected with a local eye doctor to study the effectiveness of two types of eye surgeries. She presented her work at several science competitions and won five awards. This influenced her decision to study chemistry, eye surgery or oncology at Johns Hopkins University, where she will attend this fall.

Cook understands more than most that it’s important to cherish the time spent with family and friends.

Her favorite memory of high school was the five-year anniversary of her mother beating breast cancer. She said, “to celebrate, my sister and brother-in-law drove in from Chicago to surprise her. We sliced cake to hand out to Marian students during lunch hours and asked for donations for cancer research. I was surprised when I found several hundred dollars in the donation box. The generosity of the students showed their compassion for the plight of my families and thousands across the world. This day will always stick with me as a reminder of one of Jesus’ central teachings: ‘Love your neighbor as yourself.’”