For more photos from St. Joseph visit the photo gallery.

Children gathered in the hallway between classrooms as the bishop sprinkled holy water on them and the newly rennovated spaces for faith formation.

LAGRANGE — St. Joseph Parish in LaGrange has many reasons to celebrate during this Advent season. An ambitious construction project of a new sanctuary (interior) in its last stages of completion, and the largely Hispanic church population has built a new shrine on the property dedicated to Our Lady of Guadalupe.

The parish celebrated both on Sunday, Dec. 18, when Bishop Kevin C. Rhoades blessed the new construction, presided over a Spanish Mass and led a special procession of worshippers to the shrine.

Father J. Steele, CSC, who is in his fourth year as pastor of the faith community, described his parish as “growing and thriving.” In fact, two years ago a pressing need for additional space for the burgeoning congregation led to ambitious expansion plans. Those plans have come to fruition in a five-part construction project under the auspices of general contractor D. M. Henry. No fundraising effort was required for the sanctuary, since the parish had money on hand for the work.

“There were a lot of moving parts to this project,” said the pastor. First, in order to accommodate St. Joseph’s 230 religious education students, as well as other church groups, four temporary classrooms in the church building were converted to permanent spaces. Then additional classrooms were created from the pastor’s rectory apartment, which had been located in the building.

The conversion of the pastor’s living quarters meant that a new rectory was needed; that residence was constructed on church grounds as well.

A larger altar and sanctuary were also built and now grace the main body of the church, and a new gathering area expands the entrance. The newly constructed shrine to Our Lady of Guadalupe stands directly behind the church, located on the opposite side of the wall of the tabernacle. 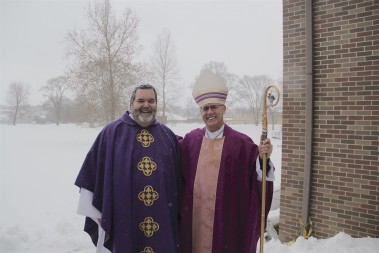 Father Steele is especially pleased with the new, high altar, with its reredos, or decorative wall, behind the altar; and its 9-foot Corinthian columns and Roman arch of faux-painted gray and cream marble with gold detailing. It was built by area craftsman Barry Campbell, owner of Te Deum Construction in LaOtto.

The new gathering area is a welcome change from a narrow entrance hall: The enlarged area is quite spacious, he said, and enables parishioners to linger and socialize after Mass while enjoying coffee and donuts. In the spring, a “porte cochere” or covered entry, will be added to provide shelter for those entering the church, which will especially benefit the elderly and handicapped.

The new rectory is a 1,300-square foot modular home, with a south-facing view, an open concept floor plan, an attached breezeway and garage and a large porch.

The shrine dedicated to Our Lady of Guadalupe was constructed behind the sanctuary wall of the church so that “Jesus and His Mother are back to back,” Father Steele noted. The $50,000 construction cost was covered by St. Joseph’s Hispanic parishioners, who raised the money through taco sales and personal contributions over a two-year period.

The most significant aspect of the ambitious project, he added, is that all the finish work was completed by parishioners.

“A small army of dedicated volunteers headed up by long-time parishioner Salvador Nieves installed drywall, did general carpentry, painted, put down carpet and laid tile. Volunteers were present on a rotating basis, six days a week, and did a lot of work, said Nieves. Father Steele estimated that the volunteers contributed at least $150,000 worth of labor to the $500,000 project. “It’s been tremendous … a real community effort,” he said.

The project culminated on the fourth Sunday of Advent, with Bishop Rhoades’ visit. He blessed the classrooms, gathering space, baptismal font, altar and shrine, then presided over a Spanish Mass with Father Steele. 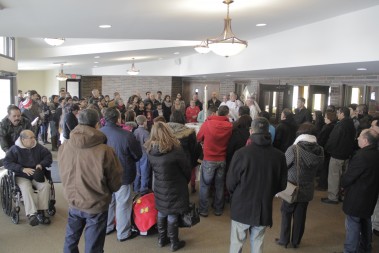 Parishioners gathered in the newly constructed narthex for the blessing of the new space and baptismal font.

During his homily the bishop spoke about the courageous faith and the obedience of Mary and Joseph, calling attention to the fact that their example invites us to accept, with an open spirit, Jesus — who is Emmanuel, which means, “God-with-us.”

The Gospel lesson for the day told of the angel’s appearance to Joseph, in a dream. Mary and Joseph received the same surprising announcement of Incarnation of God, Bishop Rhoades said, and both responded with faith and obedience to His word. Both said yes to God and to His plan for our salvation.

“We prepare ourselves, then, to celebrate Christmas by contemplating Mary and Joseph: Mary, the woman full of grace, who had the courage to rely completely the Word of God; and Joseph, the faithful and just man who preferred to believe the Lord instead of listening to the voices of doubt and human pride. We walk together, with them, toward Bethlehem.”

Bishop Rhoades also noted that the blessing and dedication of the new construction had been postponed one week due to weather. (But) “Thanks be to God, I could be with you today to celebrate the Holy Mass and to bless the new and beautiful church sanctuary and, at the end of the Mass, the Shrine of Our Lady of Guadalupe which sits outside.” The celebration continued with a procession to the shrine for that blessing, and parishioners joined in with traditional hymns and prayers to the Virgin Mary. The day’s festivities concluded with a parish dinner.