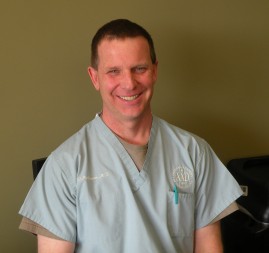 Dr. Tom McGovern, a dermatologist in Fort Wayne, has created ManAlive, a catechetical series to help transform men into wise, loving husbands, fathers, friends and workers by applying the truths of the Catholic faith. The native of the upper peninsula of Michigan is a husband, father of seven and active member of St. Patrick Parish, Arcola.

FORT WAYNE — Fort Wayne dermatologist Dr. Tom McGovern loves being a doctor, but he also loves and is excited about his Catholic faith.

The program that he has created, ManAlive, which has an imprimatur from Bishop Kevin C. Rhoades, is catching on at parishes throughout the Diocese of Fort Wayne-South Bend as men are being transformed into wise and loving husbands, fathers, friends and workers through knowledge and application of the truths of the Catholic faith.

McGovern says the best thing about ManAlive is “getting men excited about their faith and applying it to their lives — to their wives and families.” He describes ManAlive as “discussion-based catechesis programs for men.”

“It’s so fun seeing men discover things they didn’t know existed,” he says, “and being excited about it. I just love that.”
Some may have heard McGovern’s “ManAlive Minutes” radio spots on Redeemer Radio — Catholic Radio 1450 AM. Other men at St. Patrick, Arcola, Sacred Heart, Warsaw, or St. Vincent de Paul, Fort Wayne, may have participated in the series offered at their parishes.

The program sessions, which are designed to run 90 minutes each, gather men at the parish level in groups of eight to 12. Each unit consists of opening prayers and a Gospel reflection, lesson objectives and catechesis, a lesson summary and discussion questions, a “take it home” project for the week and closing prayers.

The mission of ManAlive is to provide men with a structured, yet flexible format, in a friendly environment where they can discuss and apply the truths of the faith.

Discussion is an important element of the program, because, he says, “Men like to talk. They don’t just want to sit there and listen.”

Feedback from the Sacred Heart, Warsaw, program participants showed that the men liked the topics because they could discuss them.

The discussion topics that follow the reading and reflection of the Gospel allow the men to express “what struck them personally about it. … In other words, we are trying to get them in the first steps of ‘lectio divina,’ that the pope talks about. It’s to give them the experience of reflecting on the Gospel, and getting to know Christ that way.”

McGovern asks men to bring their catechisms to the sessions.

“It is amazing how many men didn’t even know that (the catechism) existed and how easily they have found it to understand,” he says.

At the end of each lesson there is a “take it home” section that lists three options for the men to live out what they have learned in the following week. At the next session meeting, men have the opportunity to talk about their attempts to live out that resolution that week.

The program requires a leader who is committed to being faithful to Church teaching, McGovern says, and if the leader doesn’t know an answer he will be willing to say, “You know what, I don’t know the answer, but I’ll find out from father or somebody I can trust.”

And Bishop Rhoades has recently asked McGovern to do a five-course program based on the two-volume “Jesus of Nazareth” series by Pope Benedict.

McGovern has been working with Deacon Jim Tighe from the diocesan Office of Catechesis to make certain the lessons focus on the seven sacraments, the key virtues, Christ, Mary, concepts of sin and conscience.

While in medical school, McGovern was equally excited to learn about his faith as well as medicine. He started a young adults ministry and did a lot of spiritual and faith-formation reading while a student. As an intern and serving his residency, McGovern also received a catechetical diploma through the Catholic Homestead Institute. As a medical student, he took a semester off, which he spent at Immaculate Heart of Mary Seminary in Winona, Minn., studying pre-theology.

McGovern loves learning about the faith — he is an avid reader of Catholic writing — and “I really love writing this (ManAlive series).”

Of making catechesis a lifelong journey, McGovern says, “It’s amazing how a lot of men — they’re very intelligent, very well respected in their field, risen to high levels in the institutions where they work — but their knowledge of their faith hasn’t kept pace with the rest of their lives.”