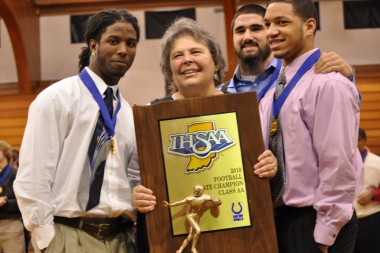 INDIANAPOLIS — The Bishop Luers Knights returned to Fort Wayne Nov. 26 with a ninth state championship football trophy. Bishop Luers was one of the three diocesan high schools represented at the 38th Annual IHSAA Football State Finals held at Lucas Oil Stadium in Indianapolis over the Thanksgiving holiday weekend. South Bend Saint Joseph’s High School competed in 3-A, Fort Wayne Bishop Dwenger competed in 4-A; but both returned with runner-up banners.

At a ceremony honoring the team at Bishop Luers on Monday afternoon, Bishop John M. D’Arcy offered the prayer and his congratulations. Fort Wayne Mayor Tom Henry made a proclamation and gave a lapel pin to Bishop Luers football Coach Matt Lindsay. The team presented the state trophy to the community.

“Fear the beard” was a motto used throughout the latter days of the season. Bishop Luers senior Steve Kiermaier, in an effort to raise money for the Catholic Charities’ Christmas families the school is sponsoring, shaved his beard at the rally. Morgan Meiser, junior, was offered the winning draw to shave Kiermaier’s beard.

At the game, Bishop Luers scored three second half touchdowns to blow open a close game and won a record-tying ninth state championship with its 26-14 decision over North Putnam at Lucas Oil Stadium.

It was the second consecutive year the Knights (14-1) reeled in the Class 2-A state title and tied them with Indianapolis Bishop Chatard and Sheridan for most in state history.

With Luers leading 7-0 at halftime, Michael Rogers finished off the opening drive of the second half with a three-yard run and Deangelo Fincher later scored on an 11-yard carry with 1:24 left in the quarter to extend the Knights’ lead to 20-0.

North Putnam (14-1) got on the board early in the fourth on Travis Franklin’s 13-yard run capping a 10 play drive to make it 20-7. Three plays into Luers’ next possession, North Putnam’s Caleb Vondersaar picked off his state finals record-tying third interception of the game at the Cougars’ 43-yard line. North Putnam gave it right back though on the next play as the Cougars fumbled the handoff and Luers’ Everett Green scooped it up and ran it back for a 39 yard touchdown killing the North Putnam momentum. The two-point attempt failed and Luers owned a 26-7 lead with 7:35 left.

The Cougars’ Hank Spencer later blocked a Luers punt at its own 16 and Travis Katt recovered it in the endzone to cut the lead to 26-14 with 2:43 left.

Bishop Luers had set up its first score of the game when Kendrick Mullen intercepted a North Putnam pass with 5:58 before halftime and returned it to the Cougars 22 yard line. Five plays later, older brother Kenny Mullen carried seven yards for the score and the kick made it 7-0.

Of Kenny Mullen’s game, Bishop Luers Coach Matt Lindsay said, “He did whatever we wanted him to do on both sides of the ball and special teams. He is a great player and a team player as well.”

The state championship also marked the eighth for Lindsay tying him with Dick Dullaghan for second-most in state history.

When asked to assess this championship over the previous eight, Coach Lindsay noted, “They are all nice. I can’t put into words to compare. All I can do is say how proud I am of this particular group.”

Coach Lindsay commented, “I’m proud of these kids in the senior class, they’ve done some great things the last two years. Congratulations to North Putnam they have a heck of a football team. … It’s just nice to come out of here with a victory.”

Coach Ben Downey’s Indians had the support of a raucous crowd of supporters showing their “Indian Pride” at Lucas Oil Stadium, but it wasn’t enough to come away with the title.
Chatard running back Ryan Kleinschmidt set a state finals record with 247 yards rushing and scored the game’s first touchdown on the Trojans’ opening drive. It became a 14-0 game when Nolan Miller scooped up a botched snap and raced 83 yards to paydirt.

Saint Joseph’s responded with a quick four-play drive, capped by a 10-yard touchdown run by Petey Gillis to cut the lead to 14-7. Another Saint Joseph’s turnover, an interception by Chatard’s Teddy Guzek, led to another Kleinschmidt touchdown, giving Chatard a 21-7 lead at halftime.

Indians quarterback Max Matthews tried to bring his team back in the third quarter, hitting Antonio Winn with a 20-yard touchdown pass to narrow the gap to 21-14.

But in the fourth, Chatard quarterback Stephen DeSchryver fired a 29-yard touchdown to Guzek to put the game out of reach.

“We played a team that’s one of the best in the state, and we made some turnovers,” lamented Downey. “When you make turnovers against them, it proves pretty darn costly, but I’m sure proud of how the boys played.”

While disappointed with a loss in his final game, senior linebacker Connor Demarais said “the experience we unbelievable. It’s something we’ll remember the rest of our lives. It was just a great year.”

When asked how he was able to guide his team through the early-season adversity to the state championship game, Coach Downey said “all I had to do was make sure they understood playing for Saint Joe is about how they play and not the wins and losses. Our success just had a lot to do with Saint Joseph’s High School.”

Cathedral gets defensive in 4-A win Over Bishop Dwenger
Indianapolis Cathedral ratcheted up the defensive pressure on Fort Wayne Bishop Dwenger, Class 4-A’s highest-scoring team, and captured a 31-20 victory and its eighth state championship.

The Irish, ranked No. 6 by the Associated Press and No. 7 in the Coaches’ poll, became the fifth school with eight or more state titles. Finishing 12-3, Cathedral won its third 4-A title in five years.

Coach Rick Streiff’s Irish defense put the clamps on Bishop Dwenger, which came in averaging 47 points a game, when it counted most. On three occasions when Bishop Dwenger advanced inside Cathedral’s 20-yard line, the Irish defense tightened, recovering a fumble once and holding the Saints to field goals twice.

Coach Chris Svarczkopf’s Bishop Dwenger team, playing in the final game for the second time in three seasons, fell short in its bid for a fourth state title. The second-ranked Saints finished 13-1.

Reymound Wright led the Saints’ offense with 143 yards and a toucndown on 14 rushing attempts. Jalen West totaled 108 rushing yards, 80 coming on a touchdown run in the third quarter.

Bishop Dwenger Coach Chris Svarczkopf told the IHSAA, “We had chances in the game, but we had some miscues. I feel bad about that because we were very close. That’s a great Cathedral football team. You can’t make mistakes, and they took advantage of our mistakes. The ball takes funny bounces sometimes. But our guys fought to the end. It wasn’t because of a lack of effort.”

He added, “We knew they were great coming out, and they had a really good game plan. They took away things we hang our hat on. The pitch for us early on wasn’t there, so we went with the give. They did a good job of mixing up their things defensively to take away certain things at different times. We always seemed to be a little behind. But at the end we still had our chances.”

Svarczkopf commented about player Remound Wright: “Remound is a tremendous player. If he is not the best player in the state, I’d like to see a better one. All of our seniors have followed his lead.”

The Dwenger coach said, “We played hard the whole game. Even with six minutes to go when we recovered the onside kick, we had our chances.”

Tim Johnson, Chuck Freeby and the IHSAA recap accounts contributed to this story.