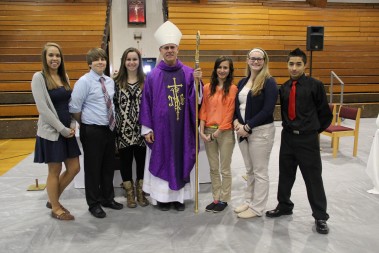 Bishop Kevin C. Rhoades poses with the six Bishop Luers High School students who were confirmed during the Ash Wednesday Mass celebrated at the school on March 5. They are from left, Cassidy Blackburn, Zachary Blackburn, both of whom also received their first Communion at the Mass, Shayna Coy, Samantha Falk, Shelby Gillenwater and Luis Munoz. This was the first time in the history of the school that students were confirmed at a school Mass.

FORT WAYNE— Ash Wednesday at Bishop Luers High School was like no other in the school’s history. Bishop Kevin C. Rhoades made his pastoral visit that day — after two other scheduled visits were cancelled due to winter weather school closings — and confirmed six students and gave first Communion to two students.

Bishop Rhoades had multiple topics in his homily, beginning with Lent and Ash Wednesday. He pledged to the students, since he was beginning the Lenten journey at Bishop Luers, that the school would be part of his prayers every day. He asked for the prayers of the Bishop Luers community as well.

He spoke of the ashes that are dispensed on Ash Wednesday, referring to the Old Testament where there are many uses of ashes as the sign of repentance.

“Sinners would wear ashes as a sign that they were sorry for their sins,” Bishop Rhoades said, “and they would often wear sackcloth.”

This continues, he said, even into the New Testament.

In the early Church, “when a catechumen was preparing for Easter to be baptized, they would have some days beforehand when they would wear ashes as a sign of their conversion from sin,” Bishop Rhoades said.

Because we are all sinners, the bishop said, we all need to wear ashes and repent of our sins.

“Ashes are not only a symbol of our sinfulness and our desire to repent, Bishop Rhoades said, “they also remind us of our mortality.”

Bishop Rhoades spoke of the opening prayer of the day. “We do battle against spiritual evils,” he said. “That’s what Lent’s about. It’s a battle.”

Life is often a battle between good and evil, the bishop noted, “not only in the world, but in our own hearts, not only between people, but within ourselves, because we all experience temptation and we all can fall into sin.”

“And we need to do battle, we need to fight,” Bishop Rhoades rallied. “We can’t be weak in our spiritual lives and just conform, just accept our sins. No, we have to fight them, fight the temptations that come from the world or from Satan.”

“And Lent is a special time of doing battle,” Bishop Rhoades continued. There are three weapons in this battle that the Church recommends during these 40 days — prayer, fasting and almsgiving.

“These things help toward our interior conversion,” the bishop said.

Bishop Rhoades spoke about the battle against spiritual evil and related how the seven capital sins, the seven deadly sins, have an effect on all in some way, but offered the virtues that fight the sins.

He called them sinful attitudes or dispositions that lead to other vices.

As he made his way through the different classes, he quizzed the students to name the sins.

He spoke of avarice, among the seven sins, also known as greed. “Greed is fundamentally selfishness regarding material things, material goods and money,” he said. Pope Francis often speaks on this theme. He says in the world today there is an idolatry of money.

“There is the temptation to ordering our lives to gaining riches and putting that ahead of not only other people, but also maybe money is more important in our lives than God,” Bishop Rhoades said.

He proposed that the opposite of greed is generosity. One of the things we are called to do in Lent is almsgiving, making sacrifices for the poor and needy. “It is also a way to combat greed in our lives,” Bishop Rhoades proposed.

Sophomores named the capital sin of sloth, “laziness especially regarding our duties in life, but also laziness in our spiritual lives,” Bishop Rhoades said. To be slothful in spiritual matters, the bishop said, can be problematic — for example shirking our responsibilities toward God like not praying, not going to Mass, or not giving attention to the presence of God in our lives every day.

Prayer is the battle tool to combat sloth. A good examination of conscience is an aid for those struggling with sloth.

The seniors gave the capital sin of lust. “What is sinful is when we do not control our sexual drive or passions and commit sexual sins,” Bishop Rhoades said. “Basically lust is looking upon another, not as another person, but an object of our sexual desires, looking at treating a person as an object.”

The way to combat lust is self-control and prayer.

The freshmen mentioned the capital sin of gluttony, an inordinate desire for food and drink. It leads to physical problems, addictions. One thing that can help fight gluttony is fasting. The virtue that is the opposite of gluttony is temperance, controlling our appetites.

The opposite of pride is humility. “I think the best way to develop humility is prayer,” Bishop Rhoades said. “Every time we pray, we come before God recognizing that He is God and I am not.”

Another capital sin is envy, “jealous of somebody else’s good fortune.” It can lead to anger, resentment and self-torment.

Wrath or anger was the final capital sin discussed. Anger can poison people and seems to be on the increase in today’s society. When anger is not righteous, it needs to be controlled. The answer to anger is patience and love.

The conference of Confirmations and first Communions was an inaugural and historic event at Bishop Luers High School. Principal Mary Keefer said of the event. “It’s exciting. I loved the witness for the rest of the student body. It gave them a chance to revisit their own Confirmations. We are a school to evangelize.”

Superintendent of Catholic Schools Marsha Jordan, who attended the Mass agreed saying, “The Confirmation of six Bishop Luers students … was a wonderful testament of our faith to the student body who witnessed this event. These students witnessed first hand their role as missionaries of the faith…”

Bishop Rhoades administered the distribution of ashes at the Mass. Those who were confirmed, received their ashes on the top of their head, rather than their forehead where the precious Chrism oil was administered during Confirmation, following Roman tradition.

Following Mass, Bishop Rhoades blessed Lenten black and red bracelets that were distributed to students and faculty to wear through Lent reminding all to “Put on Christ.”

He also blessed a crucifix encased in the gymnasium, which was gifted to the school by the Andorfer family in memory of their son Gary, a 1976 graduate who died.

After Mass, Bishop Rhoades enjoyed lunch and engaging conversation with student council members and visited theology classrooms, including Debbie Baum’s senior Catholic social teaching class, where the bishop answered questions about his service as a member of the U.S. Conference of Catholic Bishops.

He concluded his pastoral visit with a meeting with the Bishop Luers theology teachers and campus ministry staff as well as Principal Mary Keefer.