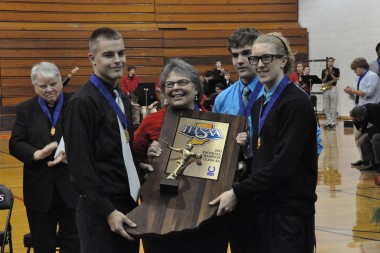 INDIANAPOLIS — For the third straight year, Coach Matt Lindsay and the Fort Wayne Bishop Luers Knights trekked south to Lucas Oil Stadium and brought home the state of Indiana Class 2-A Football championship. The three-peat adds yet another shiny bullet to the already illustrious resume Lindsay has compiled over the last quarter of a century while at the helm of the Knights’ dominating grid-iron program.

For the Knights (13-1), the outcome represented a third consecutive state title and 10th overall in 14 final appearances.

Despite losing an outstanding senior class year after year, Bishop Luers consistently keeps their revolving door of talent hauling in the titles and 2011 was no exception.

Crushing their opponents week after week in the post-season, the 10th state football title came on Friday night, Nov. 25, when the No. 1 ranked Knights beat Evansville Mater Dei, 41-17.

For Luers Coach Lindsay, it is the ninth state championship, tying him with Sheridan’s Larry “Bud” Wright for the most in Indiana.

Rarely acknowledging his powerful arm and intricate field general skills, senior James Knapke is always quick to credit the great receivers he targets. However, after fumbling Luers’ first play from scrimmage, the dazzling quarterback was nearly perfect through the air going 17-25 for 190 yards. The Bowling Green-recruit had a pair of touchdowns when he connected twice with Mike Rogers. Running scores in the ambush came from Jaylon Smith (2), Tyvel Jemison and sophomore Nic Morken. The miserly defense also had a stellar performance all night stifling the prolific Wildcats.

The dynamic Luers offense accumulated 463 yards and averaged 7.7 yards per play. The Knights averaged 39.2 points against their five playoff opponents.

On tying Sheridan coach Bud Wright with his ninth state championship, Coach Lindsay told IHSAA reporters,
“This is pretty sweet. We wanted to play our best and we did. This is a great group of guys. A great venue. A great win and it means a lot to our community.”

Coach Lindsay said of the game, “We expected this. I knew we could have a great game but I knew (Mater Dei) could do that to us, too.”

“This was a pretty dominant performance by our kids against a very good football team,” Lindsay added. “We came down here and played the best we could play. It makes you feel good as a coach. I couldn’t be any happier.”

Of quarterback James Knapke’s performance, Lindsay said,
“He’s a quality quarterback and he finished in style. We’ll miss his talents and leadership as we will all our seniors.”

“The offensive line set the tempo from the get-go,” he said. “And our execution was really good. The way we came out and took control of the line scrimmage, I applaud our kids for their effort.”

Fort Wayne Bishop Luers’ Andrew Morken was selected by members of the IHSAA executive committee as this year’s winner of the Phil N. Eskew Mental Attitude Award in Class 2-A Football. The award, named in honor of the IHSAA’s third commissioner from 1962-76, is presented annually to a senior in each classification who best demonstrates excellence in mental attitude, scholarship, leadership and athletic ability.

In what has become the conventional means for Bishop Luers football teams to close out their season, the Knights held a medal ceremony Monday afternoon in the high school gymnasium. Once again for 2011, the medals around each player’s neck were hung on a blue ribbon.

Master of ceremonies, Coach Lindsay, welcomed the team, his coaching staff, the entire student body, family and friends of the players, media and honored guests.

Bishop Kevin C. Rhoades gave a special blessing and congratulatory address explaining that he was at the Vatican when he received word of the win via a cell phone call from Bishop Emeritus John M. D’Arcy.

Co-chaplains Bishop D’Arcy and Father Drew Curry were also thanked and recognized. Bishop D’Arcy read a special letter sent during the season to Lindsay from former Notre Dame Coach Lou Holtz detailing the honesty and integrity it took to bring attention to the fact Lindsay played an ineligible player and forfeited a Bishop Luers victory. Lindsay then introduced each player by class starting with the six freshmen all the way to the outstanding senior class as the student body erupted in applause.

Mental Attitude Award winner, Morken, was given special recognition and a standing ovation by his teammates.

Next up, an emotional principal, Mary Keefer, shared a few special behind-the-scenes stories that come with a state championship — a bouquet of roses from Indianapolis Cathedral and note from a Bishop Dwenger parent complimenting the team’s quarterback, MVP and mental attitude award winner for their polished responses to media in post-game interviews.

Superintendent Dr. Mark Myers added his thanks for the impressive way Bishop Luers represents the Diocese of Fort Wayne-South Bend. Finally, the senior captains presented the state trophy to the school. 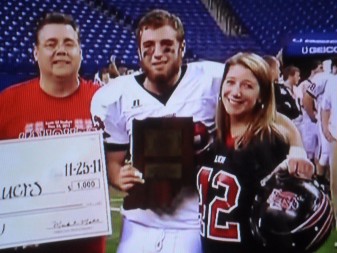 INDIANAPOLIS — In addition to winning a third straight football state championship title on Friday, Nov. 25, Bishop Luers High School also earned the distinct honor of having one of their senior players named as the 2011 Class 2-A Phil N. Eskew Mental Attitude Award Winner.

Andrew R. (Drew) Morken was nominated by his coaches and principal then selected by members of the Indiana High School Athletic Association (IHSAA) executive committee as this year’s victor after Bishop Luers’ 41-17 rout over Evansville Mater Dei.

The award, named in honor of the IHSAA’s third commissioner from 1962-76, is presented annually to a player in grade 12 in each classification of every sport who best demonstrates excellence in mental attitude, scholarship, leadership and athletic ability.

Morken maintains an 11.6 grade point average on a 12.0 scale, ranking in the top five percent of the 2012 senior class at Bishop Luers. He plans to study psychology at either Wabash College or Indiana University next fall.

In addition to football, Morken has played as an outfielder for the Knights’ baseball team the past three years, has been involved in the World Culture Club, is a peer tutor at the school and holds a part-time job at Bobick’s Golf.

Morken also received the great honor of being chosen as a Pontifical altar server for Bishop Kevin C. Rhoades of the Diocese of Fort Wayne-South Bend. Morken is the oldest of five children born to Dan and Becky Morken of Fort Wayne.

The Morkens have raised their family in St. Elizabeth Ann Seton Parish where Drew serves as an altar server, extraordinary minister of Holy Communion and greeter. Father Andrew Curry, parochial vicar of St. Elizabeth, marveled at Drew’s special trait-kindness, and added, “It is very inspiring to see a young man like Drew so involved in our parish.”

Football season is a busy time for the Morken family where all three of the oldest boys have been Catholic Youth League (CYO) standouts and father Dan has coached. Nic, a sophomore, also a member of the championship Luers squad, scored a 20-yard touchdown-run just after the half to put the Knights up 28-7, while Isaac, an eighth-grade running back helped lead the St. Joseph-St. Elizabeth/St. Aloysius/St. Therese (JAT) team this past season.

Dad, Dan, a noseman in his day, wore the red and black from 1980-1983. Humbled and teary-eyed, both proud parents were interviewed by television reporters after the award. Dan referred to Drew’s leadership on and off football field and big heart while Becky explained, “Words can not express our joy. We are blessed to be part of this Bishop Luers community.”

The tight end added a third state ring to his collection, but no season compares to his senior year. Privileged to be part of the special teams unit his sophomore year, Morken made his first appearance at Lucas Oil Stadium against Monrovia. As a casted junior, Morken high-fived with his good arm cheering on his teammates from the sideline in the win over North Putnam.

After surgery to repair his dislocated shoulder and months of physical therapy, Morken worked his tail off to gain strength back and earn a spot his senior season.

“It was so awesome making a third trip. We have a tight knit group who became like family. I couldn’t have asked for a better way to close out my senior year,” summarized Morken.

Indiana Farm Bureau Insurance, the IHSAA’s corporate partner, presented a scholarship check for $1,000 to Bishop Luers High School in the name of Morken.

Bishop Luers has made 14 appearances at the state title game, but Morken is just the fourth player in the school’s history to receive the distinguished award. Cal Miller was the first in 1985 then Jeff Goeglein in 1992. Kyle Lindsay was the last to be honored in 2001.