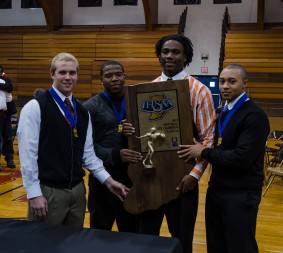 The Friday night, Nov. 23, win not only tells the sweet tale of family, tradition, talent, success and hard work paying off, but of a team that overcame a slew of adversity since last July. The title game not only culminated a star-studded, four-year career for a talented and highly recruited core of seniors but singled out a long list of unsung heroes, like juniors Quinn Cook and Nic Morken, a gritty defensive unit, an unwavering offensive line, a freshman coach who stepped up and a Luers fan base that never stopped believing.

The Knights went up against a high-powered offense in the top-ranked, previously unbeaten Cardinal Ritter Raiders, but answered the challenge holding off a second half Ritter rally after rolling out to an early 27-point lead.

The win marks the 24th straight in the postseason for Bishop Luers and 11th state football title overall for the school’s decorated program.

In the victory, Notre Dame bound, Jaylon Smith paved the way for the Knights, as he has all season, scoring three touchdowns. Michael Rogers, Jaquale Cooper and TyVel Jemison also made it to the end zone for Bishop Luers. Quarterback Jake Purichia led the attempted come-back for Ty Hunt’s Ritter club, while Jake Hagan led all scorers with four touchdowns — three on receptions, tying an overall state finals record.

Coach Steve Keefer explained in remarks after the state championship game, “The difference in the game was our senior leadership and intensity. These guys have been here before and they know what it’s all about. Ritter gave us some shots in the second half and we staggered a bit, but we came back and finished strong.”

“We executed well in the first half and played good hard-nosed defense,” Keefer said. “In the second half, we had some penalties and blown assignments and we let them back in the game. They’ve got some good receivers and a quarterback. You’re not going to shut down a team like them.”

“We’ve got great senior leadership,” Keefer added. “The 24 seniors, we called them together in the fourth quarter and challenged them and they came through. Our message all year long has been ‘Don’t look back, look forward, and be positive.’ These players bought into that.” 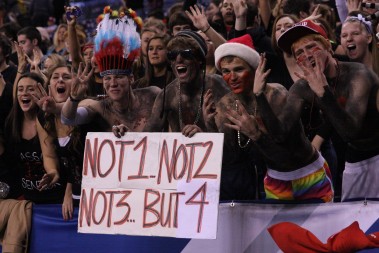 Keefer continued, “I’ve been coaching at Luers for many years. When I stepped in as head coach, most of these kids played for me as freshmen. Some of these guys on the coaching staff played for me. We’re just one family and we all buy into the Luers football tradition. My goal was to get these kids back here, and their goal was to get back here. They stayed positive and kept focused and we had a great effort tonight. The good thing is, now I can retire again.”

On Monday, Nov. 26, the Luers’ faithful gathered for what is becoming an annual tradition — the state championship medal ceremony.

On behalf of the captains, Jaylon Smith simply stated, “We went through them. We went around them, and occasionally we went over them (referring to his penalty for hurdling a Ritter defender).”

Several messages were forwarded — a poem about the magical game at Lucas Oil, details from Bishop Kevin C. Rhoades congratulatory phone call from Pennsylvania, a letter to the school from Bishop John M. D’Arcy, bishop emeritus and school chaplain, and an official proclamation from Fort Wayne Mayor Tom Henry, which declared the day for Bishop Luers football. The proclamation stated “… where greatness is given, much is demanded. …”

Coach Keefer then called each player by class to receive their coveted medals with the seniors receiving the most thunderous applause from the student body.

Donning a shirt and tie for the assembly, Catholic Youth Organization (CYO) product and All-Summit Athletic Conference first team selection, Danny Beckman, grinned from ear to ear. The senior lineman, weighing 310 pounds, had a huge hit in the back field during a crucial play of the game’s final minutes; but the favorite memory of his football career, like many of the other seniors, was winning four state championships at Lucas Oil Stadium.