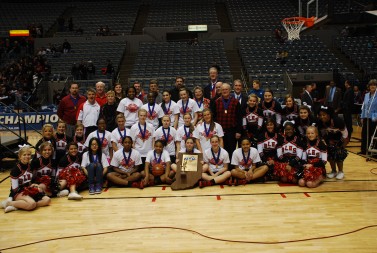 The Bishop Luers Lady Knights’ basketball team poses for a team photo after winning the Class 2-A state championship on March 12 at the Allen County War Memorial Coliseum.

The Fort Wayne and Bishop Luers community rallied around team on Monday at a special assembly at the school. Bishop-emeritus John M. D’Arcy congratulated the team. He and Bishop Kevin C. Rhoades cheered the girls team at the Allen County War Memorial Coliseum in Fort Wayne on Saturday.

In game action on Saturday, Brownstown Central came out of the gate strong in Saturday’s Class 2-A state championship game, as the Lady Braves made six of their first eight shots from the floor, but Bishop Luers’ Miracle Woods was too much to handle in the post, and Bishop Luers won the state basketball championship, 59-46, at Allen County War Memorial Coliseum in Fort Wayne.

Woods scored 24 points on 10-of-14 shooting, and also pulled down 14 rebounds, to lead the Lady Knights, who outscored Brownstown Central, 29-16, in the second half to seal the victory. Her 14 rebounds tied the 3-A state championship game record. Senior guard Brierra Young, who struggled with foul trouble throughout the game, scored 17 points, grabbed 8 rebounds, and collected 7 steals for Luers.

Guards Maria Allen and Sammie Bane scored 10 points apiece for Brownstown Central, which made its first appearance at the girls basketball state finals. The Lady Braves came out strong and ran to a 30-27 halftime lead, but were unable to withstand a 9-0, fourth quarter run as Bishop Luers pulled away. Brownstown Central finishes the season with a 23-6 record for Head Coach Karla Rieckers.

For Bishop Luers, the state championship was the first in girls basketball since 2006, when the Lady Knights won the Class 3-A title over Evansville Memorial. Denny Renier’s team wraps up the season on an 11-game winning streak, with a record of 24-2 following last year’s state runner-up finish.

“For anybody to win a state championship, it’s special,” Bishop Luers Coach Denny Renier told the Indiana High School Athletic Assoication. “For me, it is the first one, for these kids it’s the first one. But every year it’s hard to get to state and then to win it. We have 10 to 12 coaches in the program and they help develop these athletes.”

Renier said, “We played well offensively in the first half, but we could not stop them. We decided late in the first half to take the ball out of (Sammie) Bane’s hands. Our guards (Catherine Barnett and Allison Butler) just did a fantastic job in executing that. Brownstown Central’s offense really stalled when she didn’t have the ball. There is no doubt that was the difference in the game.

“Our players are tough kids,” the coach added. “They know how to finish games. They have done it all year long.”

“Miracle (Woods) played an awesome game,” Renier noted. “We thought we could really hurt them inside. She couldn’t be stopped.”