After being away from the Catholic Church for 40 years, one man’s return to the faith was simply a matter of listening to the still, small voice speaking within.

“You shouldn’t have done that.” 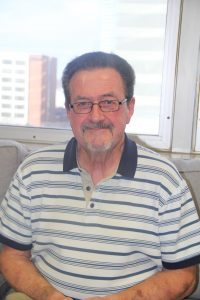 At a first Communion celebration for his grandchild in 2007, Steve Till thought little of following everyone else in the church up to receive Communion, even though he hadn’t been to Mass in a long time. Throughout the following week, however, that voice continued to speak the same words within him. He came to understand that he should not have received Communion that day without first receiving absolution in the sacrament of reconciliation.

Till stopped practicing the faith he was raised in after graduating high school in 1966. “I realize now, in retrospect, that my falling away from the Church was because I never really knew about the Real Presence of Jesus Christ in the Eucharist.” For decades he lived a very worldly lifestyle, including indulging a pornography addiction he developed in the seventh grade.

He had long searched for happiness in the world. He had even visited other Christian denominations, yet he had not considered returning to the Catholic Church.

Heeding the voice that would not be silent, Till began speaking to a priest about his life experiences and about his questions regarding the Catholic Church. One meeting became two, and two became more. Till found speaking with the priest effortless, and he never felt pushed into returning.

Confession still terrified him at the time, especially with the baggage of his past weighing heavily on him. He thought himself too far gone for God’s forgiveness, that it was not meant for someone as sinful as he. He was wrong.

Till finally decided it was time for reconciliation and headed to the confessional. “That first time was like I took a shower and it was all washed away. It was a rebirth, a burden lifted off of me; a burden I didn’t realize I was carrying.” Afterward, the same priest warmly welcomed him home.

Of confession, Till said, “To approach it is difficult, but once you’ve been through it … what an experience. What a gift God has given us to get rid of that burden. Confession and Communion — two of the greatest things in the world.”

Now Till was able to receive that which his heart most longed for: the Eucharist. “Once I realized that I needed the Body of Christ, coming back to the Church was a piece of cake. I’d have torn down walls to get to it. Once I felt the presence of Jesus Christ, I couldn’t do anything else.”

For Till, conversion did not end at the confessional door. He still had an addiction to fight, and said that it took six to eight months to finally overcome it. His love of the Eucharist was the weapon he picked up to fight against pornography.

“I was so enamored of the Body of Christ that I had to make a choice. Which am I gonna have? My pattern, for a while was I’d go to confession, I’d go to Communion and back to where I was.” He knew he couldn’t continue such a vicious cycle.

After Mass one Saturday evening, he heard a presentation by Father John Ricardo on true repentance. “My resolve at that point was, the only way I was going to defeat this was to receive the Body of Christ every day.”

And so he did. Every day for over three years, Till went to Mass and received holy Communion, no matter where he was. Throughout this time, he became amazed at how God made Communion available to him. Once, when working in Warsaw, he realized he could not make it back to Fort Wayne in time for Mass. He discovered that Sacred Heart Parish had an evening Mass, and he was able to attend.

“God made it available to me because he knew I needed it. Wherever I was at, it was always there.”

His love for Communion led Till to become an extraordinary minister of holy Communion at his parish, Most Precious Blood. Through ministry at St. Joseph Hospital in Fort Wayne, he also felt the life-changing power of bringing Communion to those who may be receiving Jesus for the last time.

Bringing people to God has become his mission. God already has used Till to help bring others back into the Church, beginning with a woman who had similarly left the Church for nearly 40 years. One day, she borrowed Matthew Kelly’s book “Resisting Happiness” from Till, then called to ask if she could attend Mass with him, to which he enthusiastically agreed. After going to Mass a few times, she told him of her wish to receive the Eucharist.

Till was adamant that she should not until she went to confession. Strongly opposed to the idea, she refused. So when Till received a Dynamic Catholic CD called “The Seven Pillars of Catholicism” — one of which is confession — he gave it to her. Later, she called Till and joyfully declared herself sin-free. She now is regularly attending Mass and receiving Jesus in the Eucharist, living her faith as an example to her own fallen-away relatives.

In hindsight, the Fort Wayne resident credits the influence his parents had on his return to the faith. “They never browbeat me about my leaving the Church; they just lived the faith and that helped guide me on the path back to Church.” He realizes now the pain his leaving had caused his parents, and he felt additional pain over his sons not having been raised in the faith.

He stresses the importance of committing one’s life to Christ and believes that it’s a necessary step.

“Everyone I know is looking for something to fill their heart with love. And until I came back to the Church, I was trying to find that out there. It’s not there. I have all the things now that I looked for.”

It was in the arms of the Church that Till found true fulfillment and peace. The joy he experiences through his re-found Catholic faith is something he wants to bring every fallen-away Catholic to.

“The door is open; come on back. It’s easy. And the biggest thing is, it’s for eternity. We are going to live forever. And what we do here will determine how we spend eternity. It’s not easy, but it’s forever.”