GARY, Ind. (CNS) — Bishop Robert J. McClory embraced the people of the Diocese of Gary with these words: “I will love you and honor you all the days of my life.”

This brought to a close his episcopal ordination and installation Mass Feb. 11 that established him as the diocese’s fifth bishop in 64 years.

The Detroit native chose the feast day of Our Lady of Lourdes for the ceremony establishing him as the new shepherd for the Northwest Indiana counties of Lake, Porter, LaPorte and Starke, and reverence for Mary was a recurring theme during the Mass.

“Today is the feast of Our Lady of Lourdes, and she is willing to help us when we ask for help and protection,” said Archbishop Christopher Pierre, apostolic nuncio to the U.S., who read the Holy See mandate and apostolic letter verifying Pope Francis’ appointment of then-Msgr. McClory as the bishop of Gary Nov. 26. 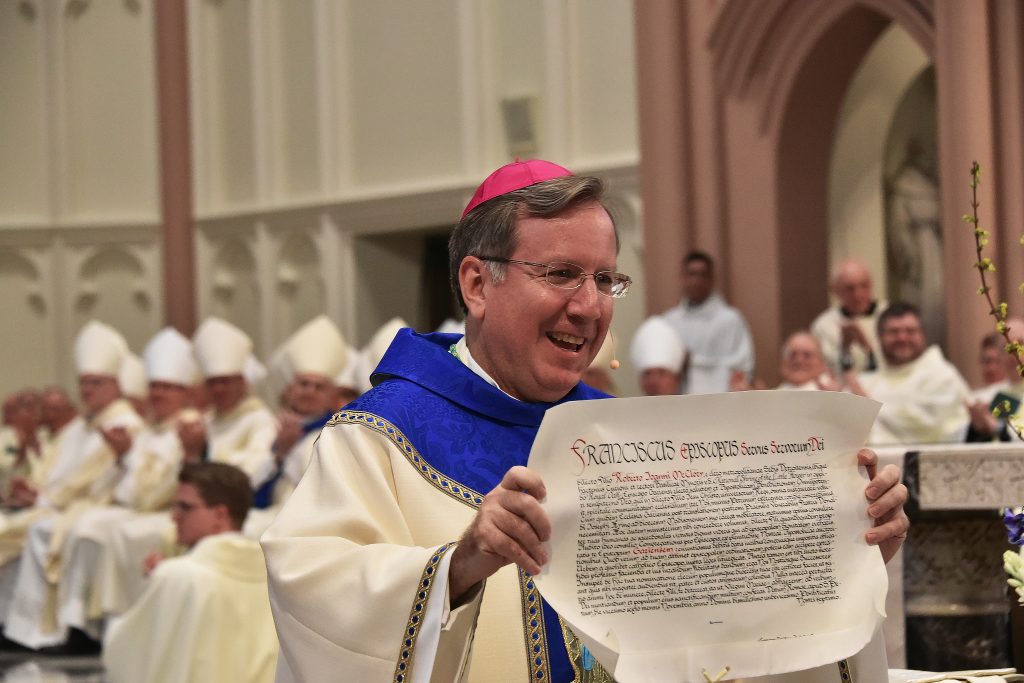 Bishop Robert J. McClory displays the papal bull appointing him to head the Diocese of Gary, Ind., during his ordination and installation Mass at Holy Angels Cathedral in Gary Feb. 11, 2020. Bishop McClory, a native of Detroit, most recently served as pastor-rector of the National Shrine of the Little Flower Basilica in Royal Oak, Mich., before becoming the fifth bishop of the Gary diocese. (CNS photo/Anthony D. Alonzo, Northwest Indiana Catholic)

Msgr. McClory, 56, made that pilgrimage himself last fall, dedicating himself to Mary just days before he learned of his episcopal appointment.

After the mandate and letter was presented to the diocesan college of consultors and the bishops, priests and deacons in attendance, the soon to be ordained bishop carried it through Holy Angels Cathedral, happily displaying it to the congregation.

That was the most memorable moment for Marie Arter, principal of Queen of All Saints School in Michigan City. “If you didn’t get goose bumps day, you never will,” she told the Northwest Indiana Catholic, Gary’s diocesan newspaper. “I was so honored to be here. When he walked around the church with that letter was what I’ll remember most.”

High school senior Isaiah Martin, a parishioner of St. Mary Parish in Kouts, Indiana, described the Mass as “astounding,” and said his favorite part was the laying on of hands by principal consecrator Archbishop Charles C. Thompson of Indianapolis, followed by co-consecrators Archbishop Allen H. Vigneron of Detroit and retired Bishop Dale J. Melzek of Gary, both chosen for the honor by the bishop-designate.

At the time of his appointment to Gary, then-Msgr. McClory was rector of the National Shrine of the Little Flower Basilica in Royal Oak, in the Detroit archdiocese. He was ordained a priest of the archdiocese May 22, 1999.

Following Archbishop Thompson, more than 30 concelebrating bishops, including Bishop Kevin C. Rhoades of the Diocese of Fort Wayne-South Bend, came forward next individually to lay their hands on the bishop-designate during the accompanying ordination prayer.

Father Michael Yadron, pastor of St. Thomas More Parish in Munster, Indiana, whose tenure as diocesan administrator ended with Bishop McClory’s ordination, called the laying on of hands “a very powerful moment” for the new bishop.

The priest was named diocesan administrator after then-Gary Bishop Donald J. Hying was appointed bishop of Madison, Wisconsin, in April 2019; he was installed there in June.

Father Yadron said the most memorable part of the Mass for him came when he shared the sign of peace “with all of the Indiana bishops who I served with, seeing them (as colleagues) for the last time.”

He called the liturgy “spirit-filled, authentic, holy and welcoming. Archbishop Thompson’s homily was just fantastic, and Bishop McClory’s talk after Communion was very authentic,” he said.

In his homily before the ordination rite, Archbishop Thompson called the bishop-designate a “pastor, shepherd, teacher and administrator” and pondered why he would say ‘yes’ “to an assignment he had to know would change his life drastically and take him away from his home, archdiocese and family.

“His vision of serving knows no boundaries,” the archbishop said, answering his own question. “Thank you for saying ‘yes’ to the call.

“The same spirit that came upon the apostles” will empower Gary’s new bishop “to share the good news of salvation in Jesus Christ,” he said. “Trust in the Lord, who has chosen you, and on this feast of Our Lady of Lourdes, remember that we came to Jesus through her.”

Alice Gorski, a member of the Parish Life Committee at St. Joan of Arc Parish in Merrillville, said later that the ordination Mass “took my breath away. I will remember most when they gave him his insignia — the miter, crosier and ring.”

The crosier chosen for the ordination Mass, representing the bishop’s call to pastor his flock, once belonged to Archbishop John F. Noll. He was the bishop of what was then named the Diocese of Fort Wayne from 1925 until his death in 1956. Pope Pius XII gave him the personal title of archbishop in 1953. Out of that diocese, now the Diocese of Fort Wayne-South Bend, the four-county Gary Diocese was created in 1956.

The Noll staff was given to the Gary diocese by its founding prelate, Bishop Andrew G. Grutka.

Waiting in line to greet Bishop McClory at the reception following his ordination Mass, Father Patrick Wainwright, of the Miles Christi religious order in Detroit, said he got to know the new prelate as chancellor of the Archdiocese of Detroit.

“He’s very kind, priestly, caring and a holy shepherd, as well as organized,” said Father Wainwright, a veteran of five episcopal ordinations who dubbed the Diocese of Gary event “perfect.”

His message to the bishop? “God bless him, protect him and guide him.”

Zloza is a staff writer at the Northwest Indiana Catholic, newspaper of the Diocese of Gary.