Around 400 women gathered at the Allen County War Memorial Coliseum in Fort Wayne to attend the event — nearly double the number from the previous year, when attendance had been limited by pandemic restrictions.

Most of the women who attended live in the diocese, but Mary Jo Parrish, founder of Kingdom Builders, reported that some had come from Indianapolis, Ohio and even as far away as Florida. Some participants were senior citizens, while others came with babes in arms. All came to hear the message that God loves them as His daughters and desires them to live in holiness. 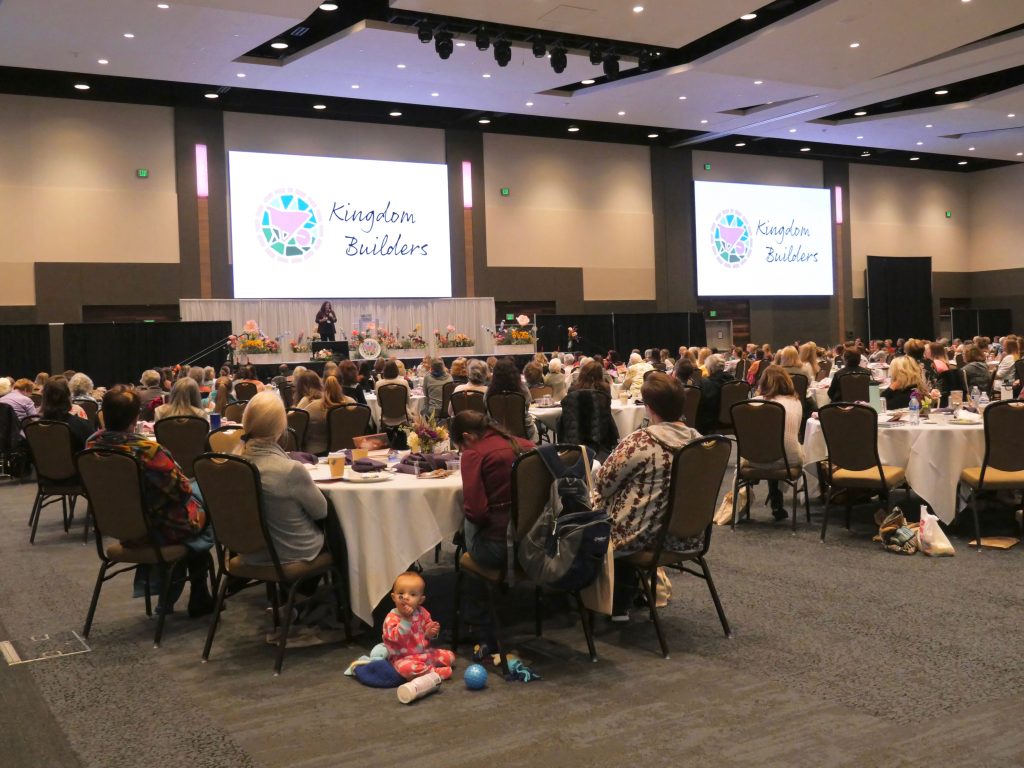 Photos by Jennifer Barton
Around 400 women came to attend the second annual Kingdom Builders conference in Fort Wayne Oct. 16. The theme of the day was “Bloom,” and the event drew women from all walks of life and ages who were seeking to grow in the love of God.

Guest speakers at the conference were Parrish; Meg Hunter-Kilmer and Dr. Mary Healy, both of whom are Catholic writers and speakers; and Heather Khym, who co-hosts the podcast “Abiding Together.”

The mother of 10, Parrish includes amusing anecdotes from her family’s everyday life in talks she gives at the monthly Kingdom Builders meetings. At the conference, she again used humor to demonstrate that God does not demand perfection to serve Him and that an ordinary, sometimes-messy life is still a path to holiness. She reminded the women present that beauty is not defined by the world’s standards, but by God’s. “The Lord does not see how we see,” she emphasized.

She told a story of a time when she prayed over a little girl with disabilities and how moving that moment was for her. “She was perfect, she was not disabled. In God’s eyes, she was designed perfectly,” she said. 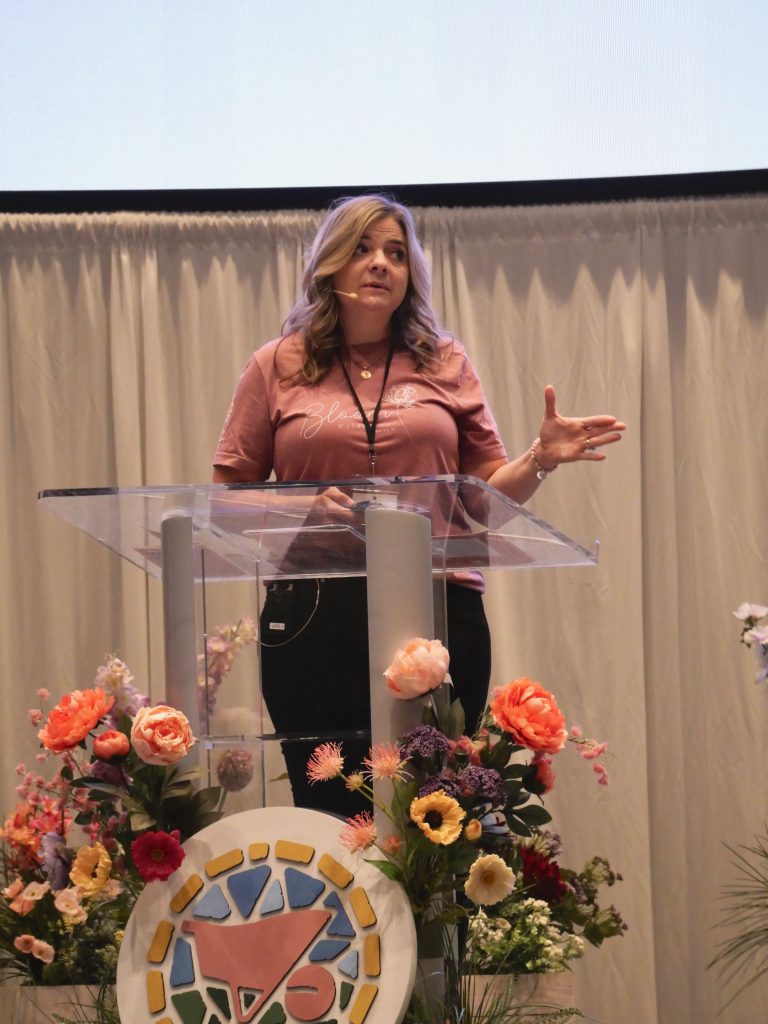 The founder of Kingdom Builders, Mary Jo Parrish, gives on honest and open talk about her own imperfections, encouraging women to look beyond their flaws and see how perfectly God created them.

Parrish related this realization to surrender, to resting in the love of God and rejecting the lies that Satan tells women: that they are not good enough, or that they do not measure up to a particular standard.

She stated that, in her own life, “I had to claim my worth and authority.” She called on the audience to do the same.

“St. Mary Margaret became a witness to the world of God’s passionate love for us. The Sacred Heart is an image of that passionate love,” he preached.

“I invite you, my sisters in Christ, to contemplate the Sacred Heart of Jesus and to experience in your hearts, especially through your prayer, the infinite love of Jesus.”

He concluded, “My sisters, I pray that, through you, the love of Jesus will spread, beginning in your families, in your parish communities and beyond. … Only this love, the love of the Heart of Christ, can transform the human heart and bring true peace to our world.”

After Mass, Hunter-Kilmer continued the theme of holiness in any state of life. She is the author of two books about saints and calls herself a “hobo for Christ.” In her talk, she spoke of how she often felt disconnected from holy people because she did not fit the saintly mold of the female sainthood as people often bring to mind: timid, meek women praying quietly in convents. Throughout her life, however, Hunter-Kilmer became spiritual friends with numerous saints and those on their way to sainthood — those who led godly lives amidst struggles. Many female saints possessed their own unique and flawed character traits, she emphasized. 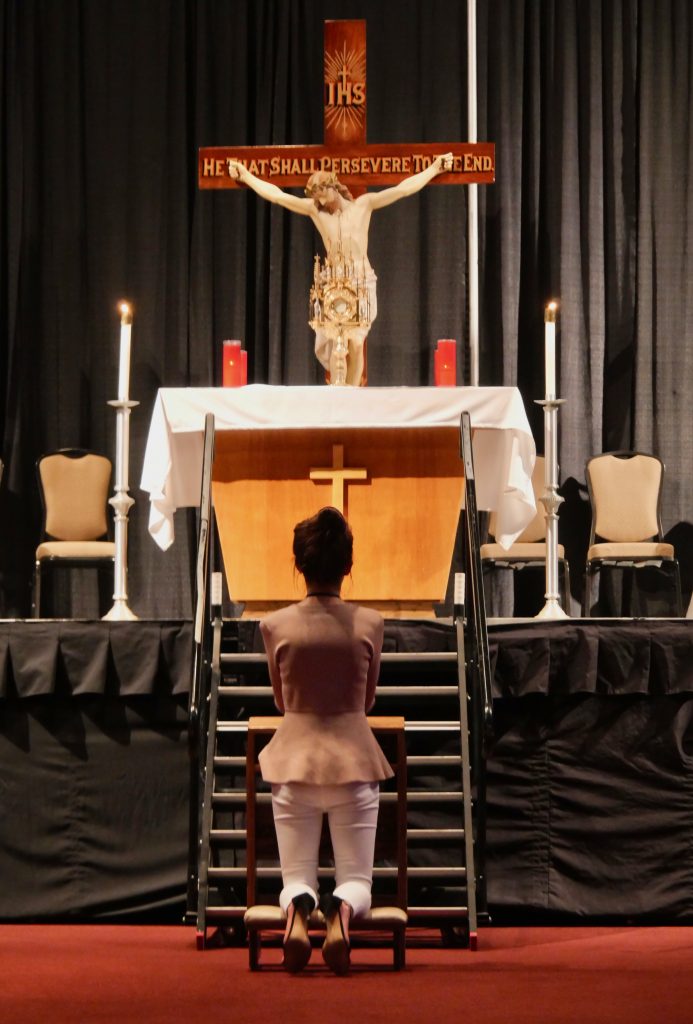 “God made us as wildflowers — some of us wild and bright and showy, and some of us small and meek,” Hunter-Kilmer said, citing the example of Queen Anne’s Lace, which the world considers a weed but her mother loved.

After the conference, Cristina Parrish (no relation) described how the talk stayed in her mind.

“I was pleasantly surprised, especially the first speaker about the saints because you feel like you’ve heard all these similar stories,” she said. “It was so wonderfully diverse and beautiful and encompassed so many things. I enjoyed that.”

During her talk, Healy focused on the story of Adam and Eve and how God created man and woman alike in dignity to complement each other, but that they lost some of this dignity after the fall.

“Human beings become unclothed because of our sins. Who clothes them? God,” she stated.

She went on to show that God implied in Genesis 3:15 that women “will have a central role in the whole battle against Satan,” which is why he often speaks so many lies to them. “Every one of you has an important and indispensable role” in fighting his influence, she added.

Finally, Heather Khym pointed out the need for all Christians to have a firm foundation in Jesus to withstand the darkness of evil. To develop that foundation, she turned to Scripture, giving those present Bible verses to reflect on that she, personally, has turned to in times of distress.

She advised them to “listen with your heart, which has been bombarded with lies” to the passages that proclaim a person’s importance in God’s eyes.

To surround the women at the retreat with a feeling of beauty and love, the Kingdom Builders team put noticeable time and effort into every detail of the day. The stage was a veritable garden, overflowing with blossoms of great variety and bouquets decorated all the tables and the confessionals.

The attention to detail is one thing that Sharon Salloway, a first-time attendee from SS. Peter and Paul Parish in Huntington, appreciated about the conference.

“I love the way they’ve pampered us with real flowers and pretty napkins and all the nice things in the restroom,” she said. “Those are the things we usually do for other people, now someone’s doing it for us.”

Mary Reust is also a member of SS. Peter and Paul. She said what impressed her about the conference was “the young people. It’s just so refreshing to come here and see these young gals who are so interested in being closer to God and living that kind of life.” Witnessing the faith of so many young women restored Reust’s confidence in the future, she added.