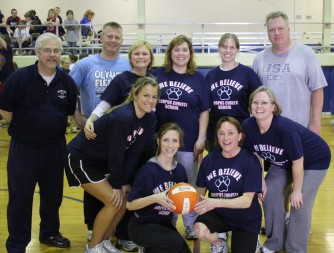 When Keith Foley reached the age of 50, he was still going to school. At least, that was his outlook.

“Keith would always say he did not get up in the morning to go to work, he was going to school,” reflected Maggie Mackowiak, principal of Corpus Christi School in South Bend. “He loved his job so much.”

Mackowiak worked alongside Foley for many years. As her confidant and co-worker, his passing earlier this month was not easy on her.

“He was a good listener… If I needed to work out a problem, I’d close the door to my office and Keith would just sit there and listen,” Mackowiak recalled.

This was just the type of person Foley was — always ready and willing to help. In fact, it was this very quality that brought him to Corpus Christi.

In 2009 Foley learned from his wife, who has taught at Corpus Christi for over 20 years, that the school needed some technical and staffing help. He approached Mackowiak, who was serving as interim principal at the time and balancing a busy schedule, to see if he could offer assistance by joining the staff.

Foley’s offer to lend his skills to the school community came as a blessing to her as she juggled a busy work schedule stemming from short staffing at the school, tending to four children at home and completing her master’s degree after she unexpectedly found herself filling in as principal.

Foley left Microsoft Corp., and came to Corpus Christi shortly after presenting his offer to Mackowiak.  Already familiar with the community because of his wife’s connection to the school and his mother’s volunteer work at its main office for over 25 years, Foley fit right in. Leveraging his technical expertise and computer skills, he successfully transferred the computer classroom to a larger area, played an integral role in setting up new smart boards and worked to revamp the school’s website and establish its access to Gmail.

Diagnosed with Leukemia this past November, Foley was a long-time member of the South Bend community. He graduated from Clay High School and obtained bachelor’s and master’s degrees from Indiana University South Bend. In addition to working at Corpus Christi and Microsoft, Foley taught middle school math at South Bend’s St. Jude School and served as principal in the Millersburg Public School District.

“This has been a difficult year for Corpus Christi, as they worked to support Keith and his family during his treatment and also tried to take care of his many school responsibilities,” Superintendent Marsha Jordan said. “…as is true in all of our schools, we operate as a family and become very close to one another. The loss of one individual greatly impacts the entire community.”

Foley is the fourth in an unusual string of deaths of school staff this year. St. Therese School in Fort Wayne mourned the passing of principal Chuck Grimm in August, teacher Kimberly Cragun-Reber in December and principal Jeanette Donovan in May.

Just before Foley passed, he had the opportunity to be baptized. Mackowiak was there to support him.

“When hospice was called in during his final days at the hospital, I came to visit him. While there, his family told me that he had confided in them that he intended to be baptized,” she said.

A priest was called in to administer the sacrament of baptism, along with first Eucharist and confirmation to Foley. In the urgency of the moment, Mackowiak stepped forward to be his sponsor — a moment she calls “one of the most beautiful and spiritual experiences I’ve ever had.”

Foley is greatly missed by Mackowiak and the school community, and his example of true kindness has left an indelible impact at Corpus Christi.

“He was an asset to our school and left a legacy that we will not forget,” Mackowiak said.