Gabriel Jones began asking to receive the sacraments of initiation after his fifth-grade classmates became altar servers. He and his younger sister, Katherine, were enrolled in a parish school, but the family soon changed parishes to St. Joseph in South Bend. At St. Joseph, for the first time, Gabriel’s non-Catholic father Bruce began going forward during Communion to receive a blessing.

Gabriel began preparing for baptism, confirmation and first Eucharist with other youths at St. Joseph. At first Bruce wanted to let the Easter Vigil be Gabriel’s special moment, but he soon decided to join RCIA himself.

Growing up, Bruce’s family had occasionally attended Baptist services, but he hadn’t been baptized until he and Mary, a cradle Catholic, were planning their wedding. 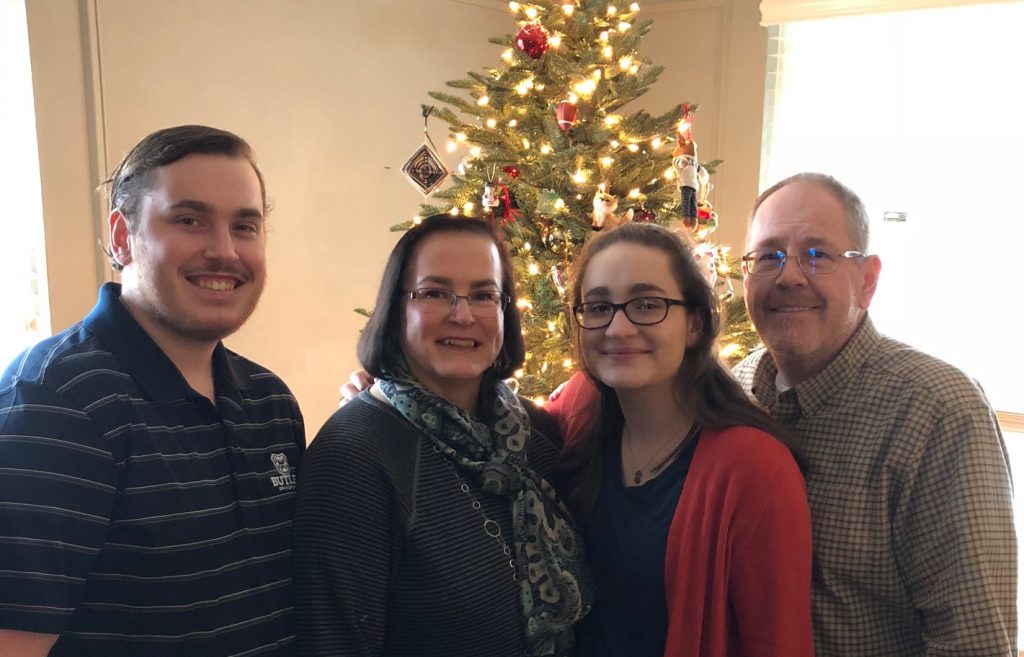 From left are Gabriel Jones, Mary Butiste-Jones, Kathering Jones and Bruce Jones. Mary, a lifelong Catholic, saw Bruce and her children received into the Catholic Church 10 years ago, and they have grown in their faith together since then.

Bruce had never looked seriously at organized religion, he said. Later, Mary Butiste-Jones, Gabriel’s mother, had also fallen away from actively practicing her Catholic faith during her years in college, law school and at work. Making a Christ Renews His Parish retreat at St. Joseph in October 2008 became important to her, though, and the family became regulars at Sunday Mass.

Katherine was right on the edge of the “age of reason.” She had the option of participating in the children’s RCIA program with Gabriel, but decided she’d rather be baptized under the infant rite so she could later receive the sacraments of reconciliation, Eucharist and confirmation with her classmates. She was baptized in February 2009.

Bruce has very positive memories of RCIA. “When I looked around at the first session, I realized how diverse we were. But we grew very close over the course of that year. Most of us are still good friends.”

He made his profession of faith at the Easter Vigil in 2009, when Gabriel was baptized, when they were both confirmed and received their first Eucharist. The experience was so powerful that the family has never missed the Easter Vigil at St. Joseph in subsequent years.

Easter last year was especially powerful for Gabriel. His freshman year at Butler University was not going well academically or personally. A close relative and a “second mother” to him had recently died. He was so upset with God that he stopped going to Mass. But at the Easter Vigil, as he watched three young men receive the sacraments of initiation just as he had eight years earlier, his faith was revitalized. “I needed that,” he said. “The vigil opened me back up.” He eventually went to confession, and the priest “helped me get my head screwed back on right.”

After they entered the Church, the Jones’ became very active in St. Joseph Parish. Bruce used his computer expertise on the school board and parish council, facilitating the transition to electronic record-keeping. Mary served on the stewardship committee, and they both helped determine whether the parish could support a capital campaign to build the new gymnasium. They also gave a talk on stewardship at the end of Sunday Mass. In that talk, Bruce explained that one of the reasons he didn’t join a church earlier was his impression that “preachers always had their hands in your pocket.” But once he got his priorities straight and gave his life to the Lord, things fell into better order. They were able to be very generous with their time and talent as well as their treasure. “We really believe in giving,” said Bruce. “It’s so true that the more you give, the more you get.” 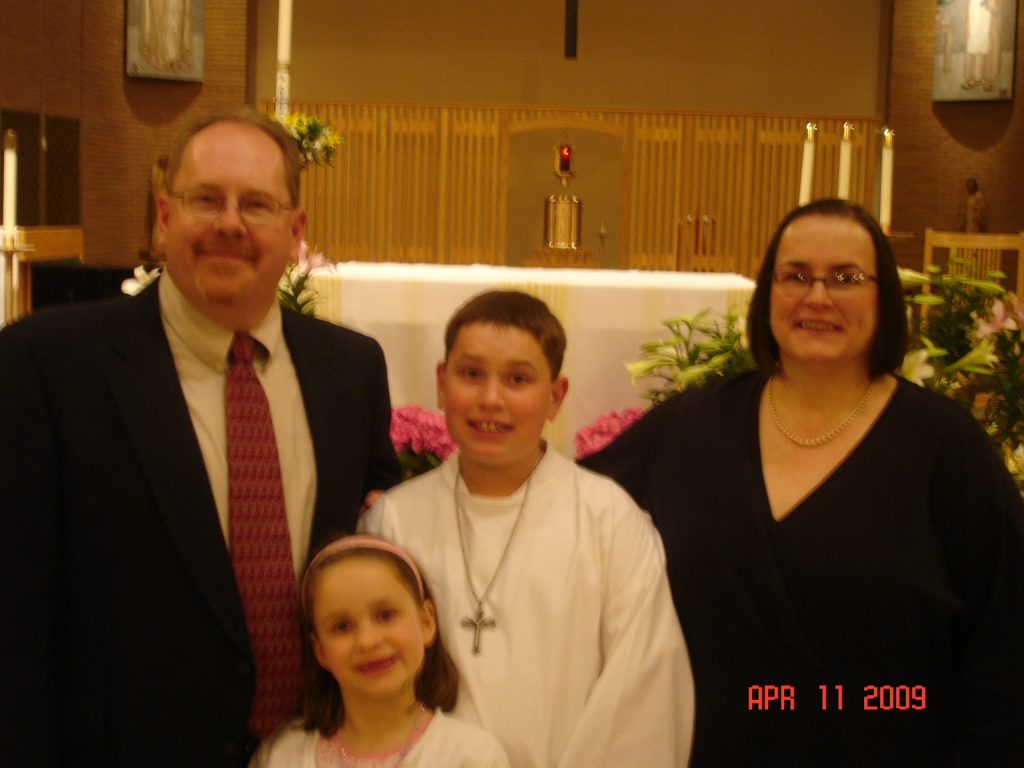 When Gabriel was composing essays for college applications, he decided to write about the service he had done at Hope Ministries homeless shelter, the food bank and Our Lady of the Road, a breakfast ministry of the Catholic Worker community. Admissions officers at more than one Catholic college were so impressed that they responded with hand-written notes. Bruce and Mary couldn’t figure out why Gabriel had such a big grin one Easter, when he spotted one of the men who was being received into the Church. It turned out that the man was a resident of the homeless center, where Gabriel had struck up a friendship with him.

Bruce and Gabriel both had health crises a few months ago. Bruce needed extensive heart surgery, and Gabriel, who has a heart valve issue, had an abscess that necessitated removal of his tonsils and adenoids. During this time, the family felt buoyed up by their faith and the prayer support of the Christian community. “I had pain,” Bruce recalled, “but absolutely no fear. I knew everything was going to be OK, regardless of what happened.”

All four members of the Jones family have also served in liturgical ministries. Katherine’s first assignment was being an altar server for a visit by the Congregation of Holy Cross provincial. Gabriel also got his chance to fulfill his original desire to be an altar server, serving funerals and Sunday liturgies well into his years at Saint Joseph High School. During one three-month stretch, he served Mass every single weekend.

“Looking back,” said Mary, “it’s clear that the Holy Spirit guided us.”