Sixteen years ago, Isabel Soto thought she was home free. She came to the United States legally, from Mexico, on a visa and joined other family members in a small, quiet northeast Indiana town. Here, she thought, she could finally pursue her dream of going to school, and perhaps one day raise a family without fear of crime and deprivation. Even with its snow and cold winters, Angola seemed like a paradise.

Life in her native Mexico City had been anything but. Soto’s childhood was full of fear and uncertainty. In the poor neighborhood where she grew up, she and her family lived in constant danger of gangs, crime and drug-related violence. Fear of being mugged or killed was just a normal part of everyday life.

“I could not even walk to the market without being afraid,” said Soto. “It was a very dangerous place.”

At a young age, Soto had to quit school to work so she could help her family make ends meet. In those circumstances, her dream of getting an education became little more than a fantasy. Her only horizon was one of ongoing fear, crushing poverty and bleak prospects. 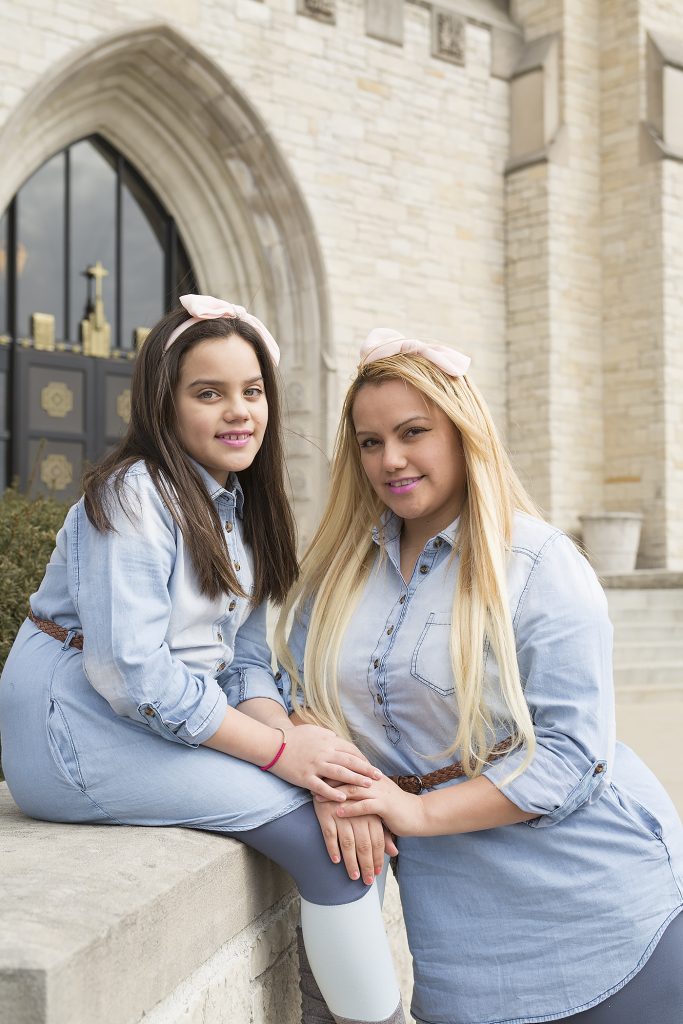 Isabel Soto fled one dangerous situation and later found herself in another: She has now been able, with the help of Catholic Charities, to pave the way to a safe future for herself and her daughter, Kailey.

All of that seemed to move behind her, though, when at 17, she had a chance to come to the United States. She was finally able to enroll in high school, and by the end of four years, something remarkable had happened.

After working very hard, Soto graduated with a high school diploma — a terrific achievement for someone who only a short time earlier did not speak the language and lacked a foundation in formal education.

“This seemed like a very safe place, a wonderful place with lots of opportunity,” she said. “I was very happy with my life.”

Then Soto met a man, fell in love and got married. That marriage produced a beautiful daughter, Kailey. Tragically, her husband became abusive: so she did what for her had been unthinkable. She contemplated divorce.

“When I got married, I believed [marriage] was for life,” said Soto. “So it was a very, very difficult decision for me to leave.”

But while divorcing her husband would free her and her daughter from harm, it would also put her at risk of deportation because she did not have a green card. She was very afraid of being sent back to Mexico City, so she turned to a friend. The friend referred her to Catholic Charities.

Through the agency’s immigration services, Soto found hope. The silver lining was that she received permission to stay under the Violence Against Women Act, a law enacted in 1994 that allows spouses and children of U.S. citizens to self-petition to obtain a green card. Soto petitioned for VAWA status, which was granted to her in 2015.

Now on her own, Soto was filled with equal measures of relief and uncertainty. She saw the long road ahead to independence. To provide adequately for her daughter, she would have to continue her education so she could land a better-paying job. With that goal in mind, she enrolled at Ivy Tech with her sights set on a two-year degree in business operations applications and technology.

Soto is now on track to complete that degree in August of this year. In the meantime, she is holding down two jobs: one as a tax preparer and the other as an administrative assistant in an export company. She also studied to become a U.S. citizen, a test she just passed in April.

“I’m so happy now to be a citizen,” said Soto. “I am truly living my American dream.”

Luz Ostrognai is the immigration supervisor for Catholic Charities.