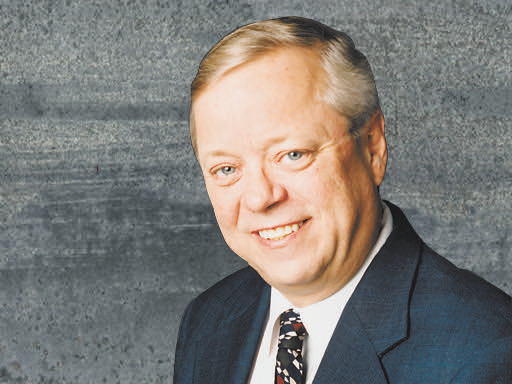 Robert P. Lockwood is pictured in this undated photo. The former president of Our Sunday Visitor, longtime columnist for OSV Newsweekly and former director of communications for the Pittsburgh Diocese, died March 4 at his home in Fort Wayne, Ind., after suffering from a variety of illnesses. He was 69. (CNS photo/courtesy OSV)

FORT WAYNE (CNS) — Robert P. Lockwood, former president of Our Sunday Visitor, longtime columnist for OSV Newsweekly and former director of communications for the Pittsburgh diocese, died March 4 at his home in Fort Wayne, after suffering from a variety of illnesses. He was 69.

His funeral Mass is to be celebrated March 15 at St. Elizabeth Ann Seton Church in Fort Wayne.

“Bob Lockwood has made a singular contribution to Catholic publishing in this country,” said Greg Erlandson, who is director and editor-in-chief of Catholic News Service. “As president of Our Sunday Visitor Publishing, he brought a strong sense of mission and of audience. He helped revitalize the company’s book publishing arm and introduced several new magazines.

“His service in the Diocese of Pittsburgh was marked by many improvements in diocesan communication efforts,” he said in a March 6 statement.

“But Bob may be best known for his columns. He was the poet laureate of growing up Catholic in the early 1960s, and he had a knowing affection for ordinary Catholics living their faith without fanfare or controversy,” added Erlandson, a former president and publisher of Our Sunday Visitor. “In his columns and books, he knew how both to delight and instruct, always with a gentle touch. He will be greatly missed.”

A native of Yonkers, New York, Lockwood joined the staff of Our Sunday Visitor, based in Huntington,
shortly after graduating from Fairfield University in 1971.

He resigned from Our Sunday Visitor in November 1999 and for a brief period was director of research for the Catholic League for Religious and Civil Rights, operating out of Fort Wayne.

In August 2001, he was named director of communications for the Diocese of Pittsburgh and also became general manager of the Pittsburgh Catholic, the diocesan newspaper. He headed a three-person communications department.

Cardinal Donald W. Wuerl, retired archbishop of Washington and currently apostolic administrator of the archdiocese, was Pittsburgh’s bishop when Lockwood took the position.

“I first came to know and recognize Bob Lockwood’s abilities during his long and highly successful career at Our Sunday Visitor,” he said, and as Pittsburgh bishop, he “was delighted to be able to welcome him” to head diocesan communications.

“Bob was a master of many communication activities and he generously brought his skills to reach people through his clear, convincing and colloquial style,” the cardinal said in a March 6 statement. That day, Ash Wednesday, he remembered Lockwood at Mass at the Cathedral of St. Matthew the Apostle, he said, “and thanked God for Bob’s great service to the world of Catholic publications and communications.”

“Among his gifts was the capacity to reach many, many people and help the rest of us who relied on his guidance to try to do the same,” Cardinal Wuerl added. “Personally, I have lost a friend who was also a gifted colleague. May he rest in peace.”

In 2014, Lockwood retired and moved back to Indiana and continued to write about the Catholic Church.

“Every other week for the past 30 years,” Lockwood “consistently and brilliantly” wrote a column for OSV Newsweekly,” Gretchen R. Crowe, editor-in-chief, wrote about his death March 5. He was scheduled to write his next column when he died, she noted.

“As it turns out, however, his final column appeared in the March 3 issue, in which he was reflecting on a recent hospital stay. His final two paragraphs say so much about his character, and even about his suffering during his final weeks of life,” she continued.

“He wrote: ‘Jesus said to the crowds: “Come to me, all you who labor and are burdened, and I will give you rest. Take my yoke upon you and learn from me, for I am meek and humble of heart; and you will find rest for yourselves. For my yoke is easy, and my burden light” (Mt 11:28-30). Have a blessed Lent. Live those traditional practices of prayer, fasting and almsgiving for the whole season. And we will meet in joy at Easter morning.’”

“How beautiful and fitting that those were his final published words,” Crowe added.

Lockwood, she said, “had a way of bringing the reader back to a time gone by while still remaining relevant today. That is not easy.”

In a March 4 statement, Ann Rodgers, a veteran of daily journalism who succeeded Lockwood in Pittsburgh, said: “Those of us who serve in the Catholic Diocese of Pittsburgh, and many who work in the Catholic press, are mourning the death of Bob earlier today.

“Bob had a storied career at Our Sunday Visitor before becoming director for communications at the Catholic Diocese of Pittsburgh,” she said. “He was a brilliant writer with an intuitive sense of how to touch the hearts of salt-of-the-earth parishioners. He was my source when I worked in secular journalism, then my mentor and friend when I succeeded him at the diocese. I am doing my best to walk in his footsteps, but I will never fill his shoes. RIP Bob. Pray for us.”

Lockwood was the author of numerous books, including “A Guy’s Guide to the Good Life: Virtues for Men,” published by Servant Books in 2009.

Off his 2004 book published by Loyola Press, “A Faith for Grown-Ups: A Midlife Conversation About What Really Matters,” one reviewer said that “with great wit and keen understanding,” Lockwood explored “the common experience of growing up Catholic from the 1950s through the 1970s and invites fallen-away Catholics to return to the Catholic faith and experience an adult spirituality, rich in meaning.”

Lockwood is survived by his wife, Cindy; a son, Ryan; and a daughter, Theresa; and three grandchildren.