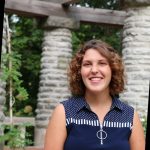 A crackling fire and a pavilion filled with hay attracted 100 people for an Advent celebration steeped in joy. On the weekend of Dec. 20, the parishioners of SS. Peter and Paul Parish in Huntington ventured to the grounds of St. Felix Catholic Center to bring to life a living image of the Nativity.

This budding tradition, ushered in by the parish’s director of Faith Formation, Drew Stuart, returned to the parish for a second season. The concept was gleaned from Stuart’s time as a student at the University of Saint Francis, and SS. Peter and Paul parishioners joyfully and unflinchingly carried it on with Stuart leading the way. 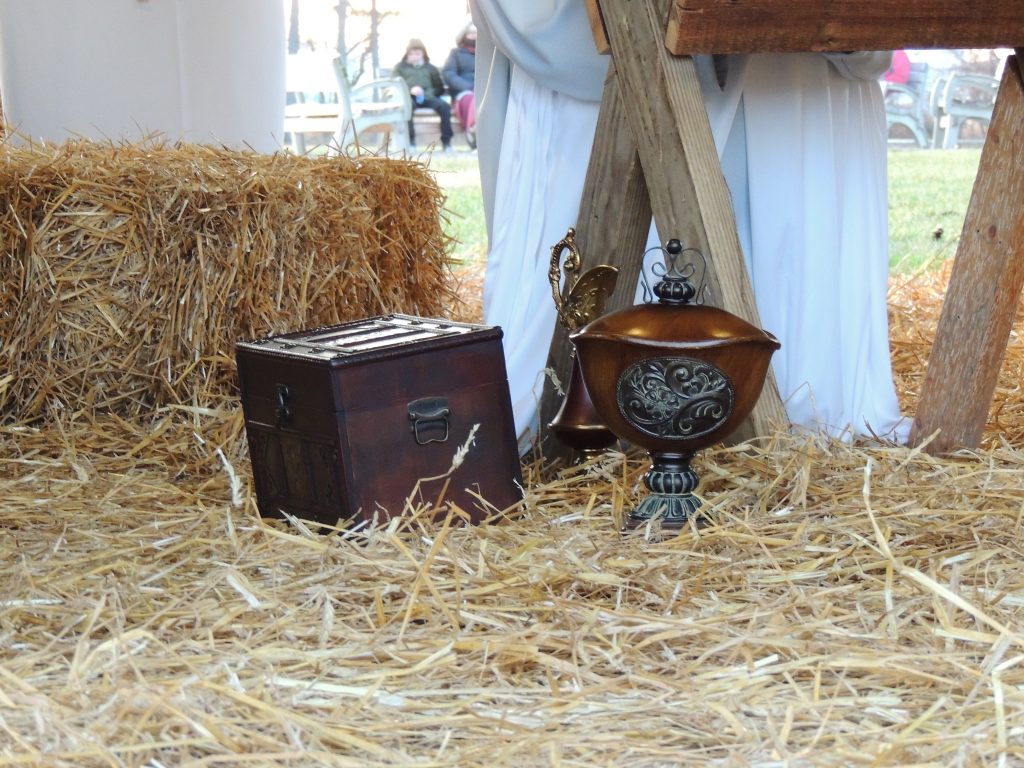 All photos by Colleen Schena
Representations of the wise men’s gifts, gold, frankincense and myrrh are placed at the side of the feedbox during a living Nativity offered by volunteers from SS. Peter and Paul Parish, Huntington, the weekend before Christmas.

The overwhelmingly positive reception of the 2019 living Nativity prompted, if not necessitated, in Stuart’s mind, its triumphant return for the 2020 Advent liturgical season. “[Parishioners] demanded this. They said it helped them, that it didn’t feel like Christmas until they came to this,” he said. Yet as with many events this year, cancellation was a legitimate concern.

Ultimately, the volunteers chose to proceed, seeing even more of a need for an outdoor prayer experience this year than any before it. “A pall’s been thrown over Christmas this year,” commented Stuart. “People need light, and people need hope.”

“It was a good way to share our faith and to put a spotlight on the actual reason for the season,” added Chace Olinger, who has played a wise man in the parish’s Nativity since its first season. A longtime friend of Stuart, Olinger agreed to offer his talents to the living Nativity once more without hesitation.

“It’s a bright spot in our community and in our church – and that’s definitely something you need during the dark winters.” 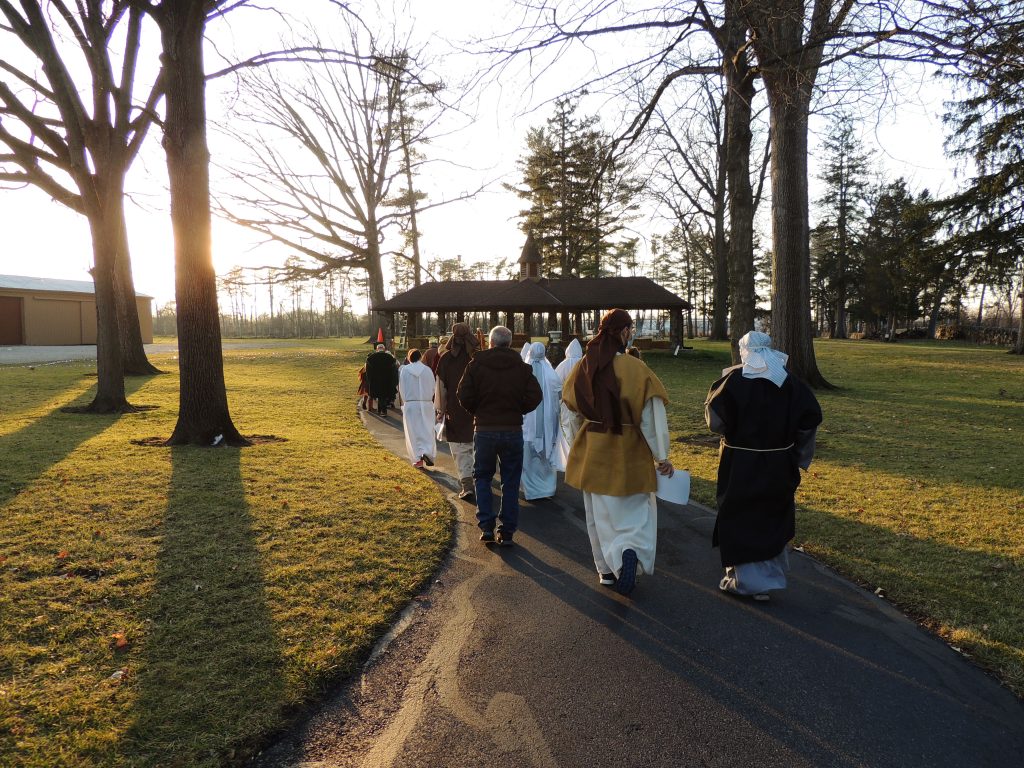 The cast of the SS. Peter and Paul living Nativity make their way to the outdoor pavilion at St. Felix Catholic Center.

The power of a simple narrative retelling of one of the greatest stories ever told was enough to bring a new wave of joy, anticipation and active reflection into the attendees’ remaining Advent season. Participation in the Nativity scene, humbly framed by live animals, left its participants pondering the truly meek and quiet beginnings of Christ’s incarnation.

University of Saint Francis faculty member Allen Machielson, who said he has been privileged to embody the role St. Francis at the event, finds it to be a great honor to recall the historical roots of the Nativity scene as it is presented in modern times. “We are literally turning people back to that day, when St. Francis presented this in Greccio.” 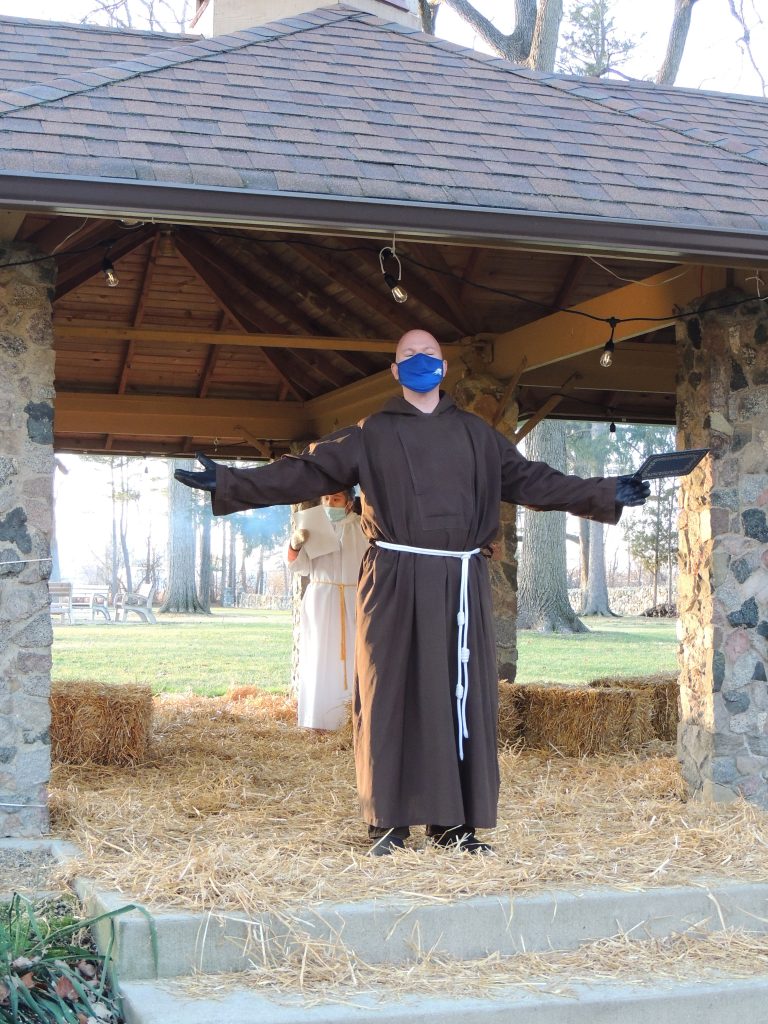 Allen Machielson, a faculty member at the University of Saint Francis, plays the sole speaking part of St. Francis during a living Nativity offered by volunteers from SS. Peter and Paul Parish, Huntington, the weekend before Christmas.

Being immersed in Franciscan spirituality and heritage, Machielson sees a clear set of parallels through the century, connecting the first Nativity and the Greccio presentation of Francis’ crèche to the present-day’s masked actors and still-snowy terrace of December 2020. Each presentation holds historical significance and further intertwines hope in Christ into the unfolding centuries. While “there will be no doubt it happened in 2020” because of the masked participants and actors, outdoor social distancing and two separate performances to mitigate crowds, the hope and joy of Christ still lived within the moment.

Maintaining the joy of Christ in a pandemic Advent season, however, came with a set of unique challenges. Gathering volunteers and resources is a task reserved for the truly determined and deeply passionate of individuals to begin with, and in a year where every breath is met with uncertainty, volunteers are even more scarce. But for the SS. Peter and Paul living Nativity, many of its previous actors returned and parishioners fashioned costumes, prepared the lighting, manned the sanitization and free mask table and documented each of the two performances with photographs and videos. 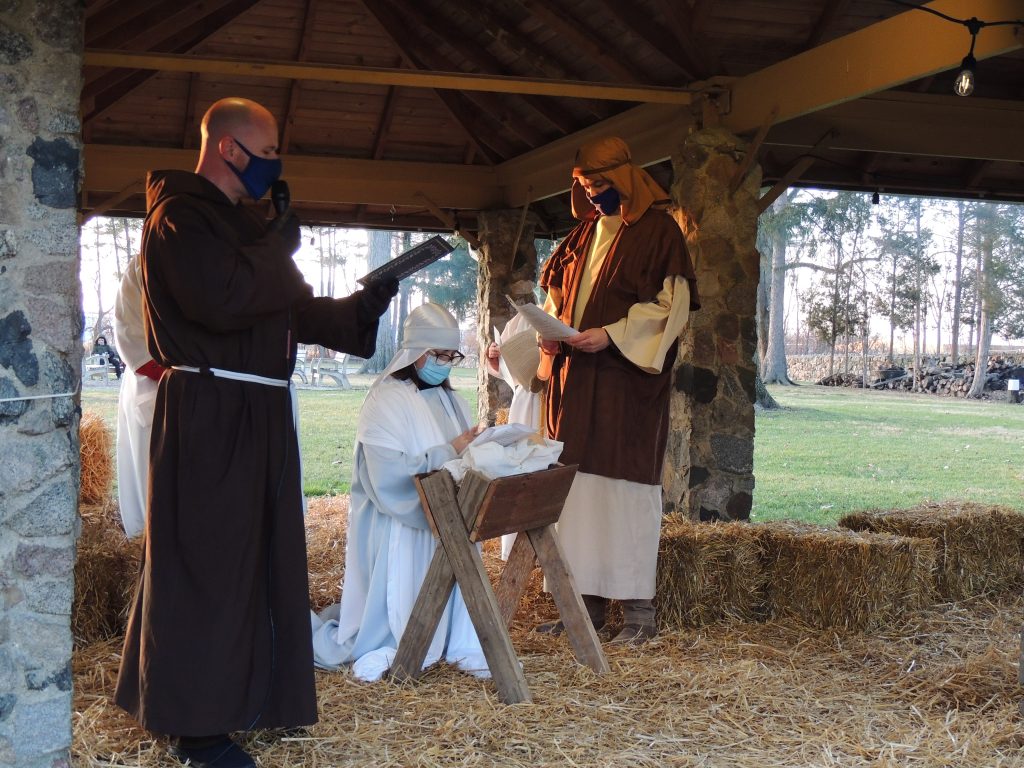 The actors of Mary and Joseph pause over the child Jesus, portrayed by a doll due to the cold weather, as Machielson continues his narration of the Nativity.

Strict adherence to diocesan safety guidelines allowed volunteers to feel able to protect themselves, actors and designers, as well as their families and friends who were in attendance.

Roger Dinius, a returning volunteer and candidate for the permanent diaconate, portrayed one of the wise men alongside his shepherd children and angel grandchildren: “It’s almost like a family affair this year,” he noted. 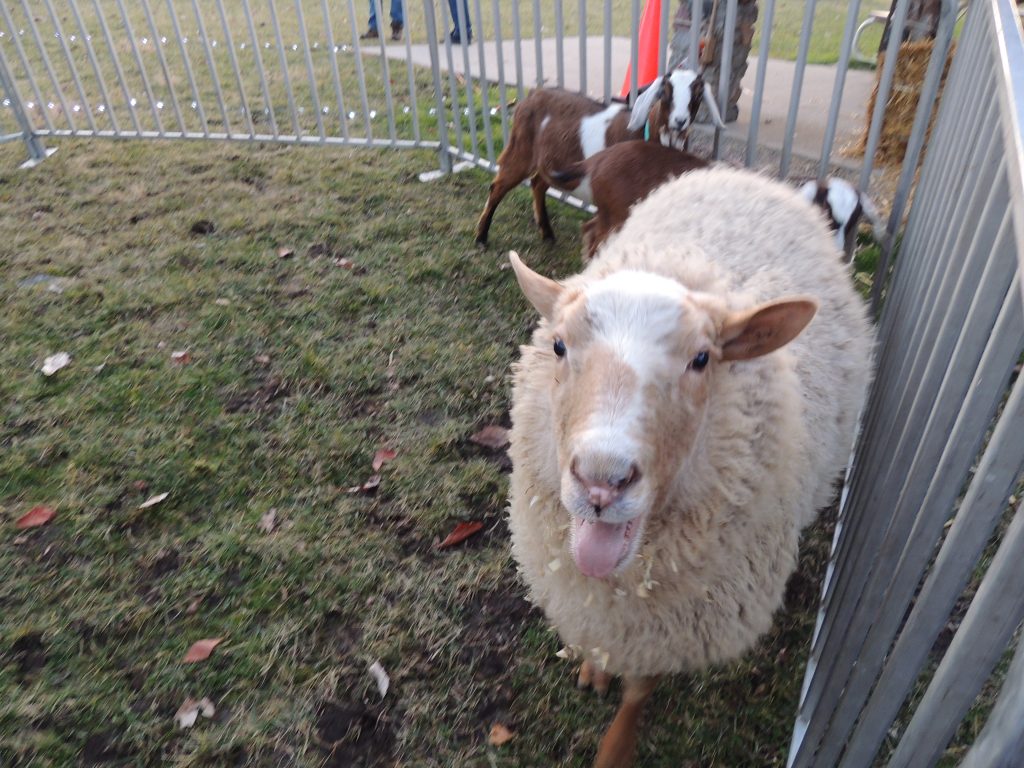 A sheep excitedly bleats as it awaits performance time.

Actors participated in varying preparations the weekend of the performance, varying from lighting and mounting wind-blocking tarp to keeping watch of the experience’s jumpy and ever-entertaining live animals, including a camel, a donkey, a cow, goats and sheep.

“It was nice to do something with some semblance of normalcy,” noted Father Tony Steinacker, pastor of the parish. Amidst the ever-growing list of canceled celebrations, he was relieved to have the ability to continue outdoors and open to parishioners.

Many were thankful for the chance. “I’m glad that stuff like this is happening in our community,” said Olinger. “I enjoyed it thoroughly last year and was really hoping we’d be able to have it this year.”

For those still looking to experience the living Nativity, they can do so from an even safer distance. Both performances were recorded and will be uploaded to the parish’s YouTube channel. 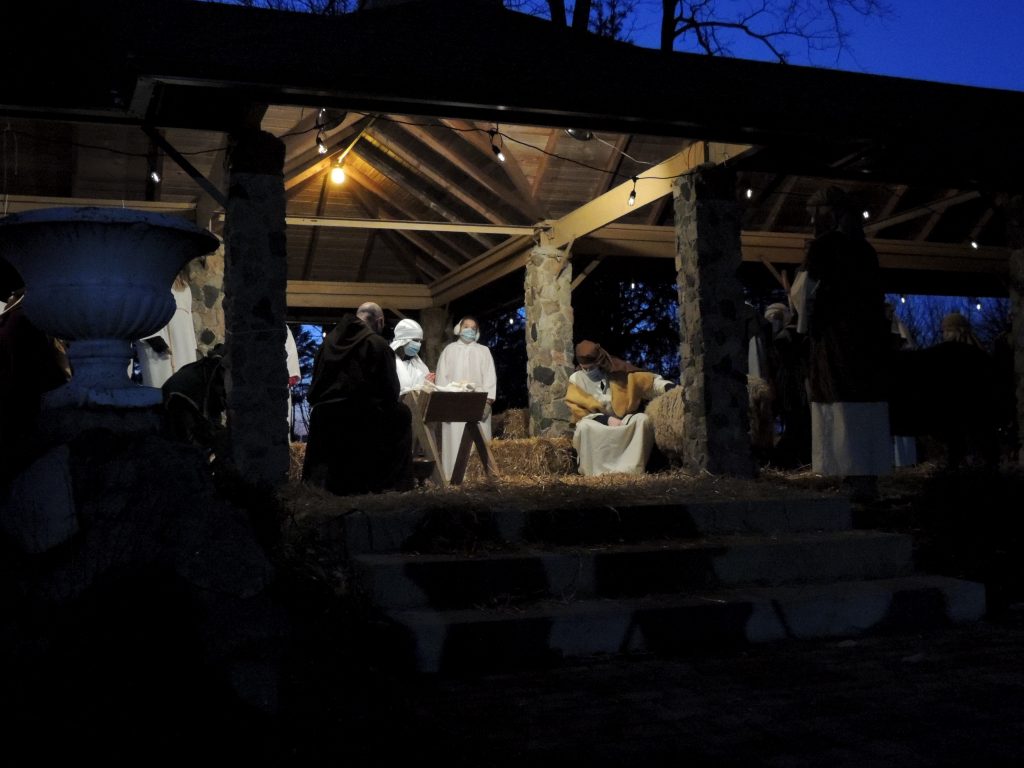 All pause for a moment of silent prayer at the conclusion of the first living Nativity performance offered by parishioners of SS. Peter and Paul Parish the weekend of Dec. 20 in Huntington.