Spanish-speaking musicians and choir members from around the diocese gathered at St. John the Evangelist Parish in Goshen Saturday, June 15, for a daylong workshop taught by Oregon Catholic Press Institute members. OCP is a publisher of Catholic liturgical music, songbooks and CDs in several languages, including Spanish. 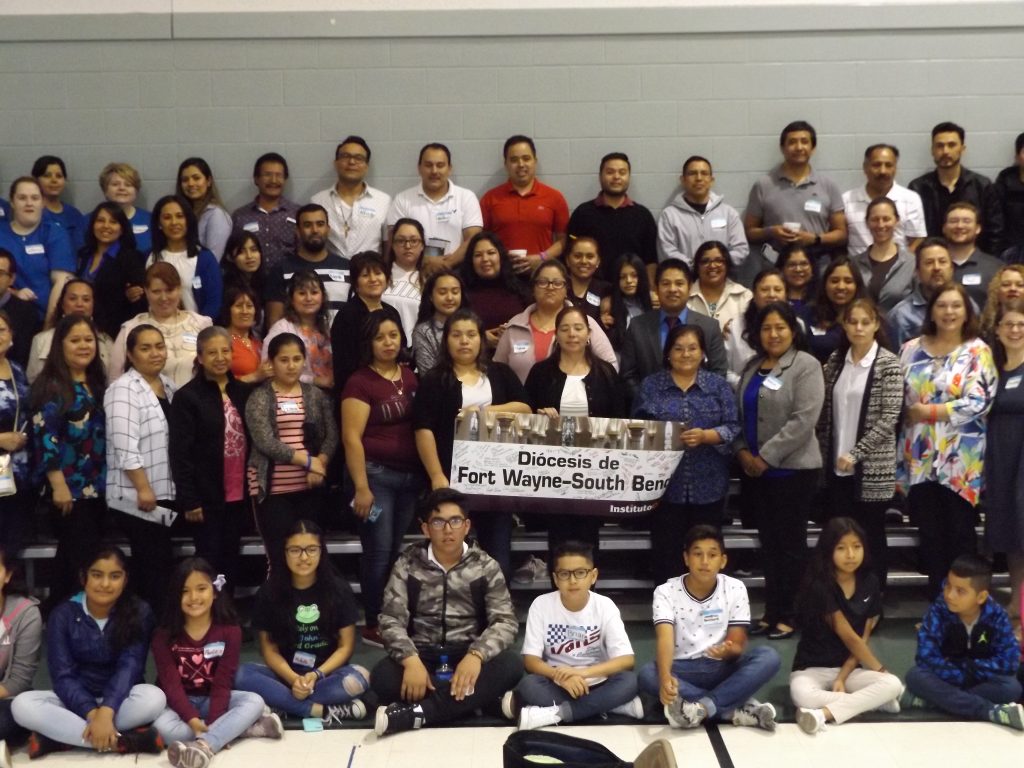 The first keynote talk, by Fernandez, was based on the U.S. Conference of Catholic Bishop’s letter, “Sing to the Lord.” It touched on defining the role of the liturgist and how to choose songs. It  explained that a song sung during distribution of the Eucharist would not be the same as a song appropriate for adoration, according to Esther Terry, director for Hispanic Ministry and Special Projects for the Diocese of Fort Wayne-South Bend, and Lourdes De Silva, associate director for Hispanic Ministry and Adult Faith Formation.

Terry read a letter from Bishop Kevin C. Rhoades, sending his regrets for not being present but thanking attendees for their commitment to their music ministry in the diocese.

He acknowledged the great commitment it takes to serve in liturgical ministry each week and help animate those present to participate fully in the Mass. He encouraged the workshop participants to continue to develop the talents God gave them, to see joy in the Mass and to allow Jesus Christ to hold a special place in their lives and in the music ministry in which they’re involved. He also cited St. John the Baptist, who said, “He must become greater, I must become less.” (John 2:3) 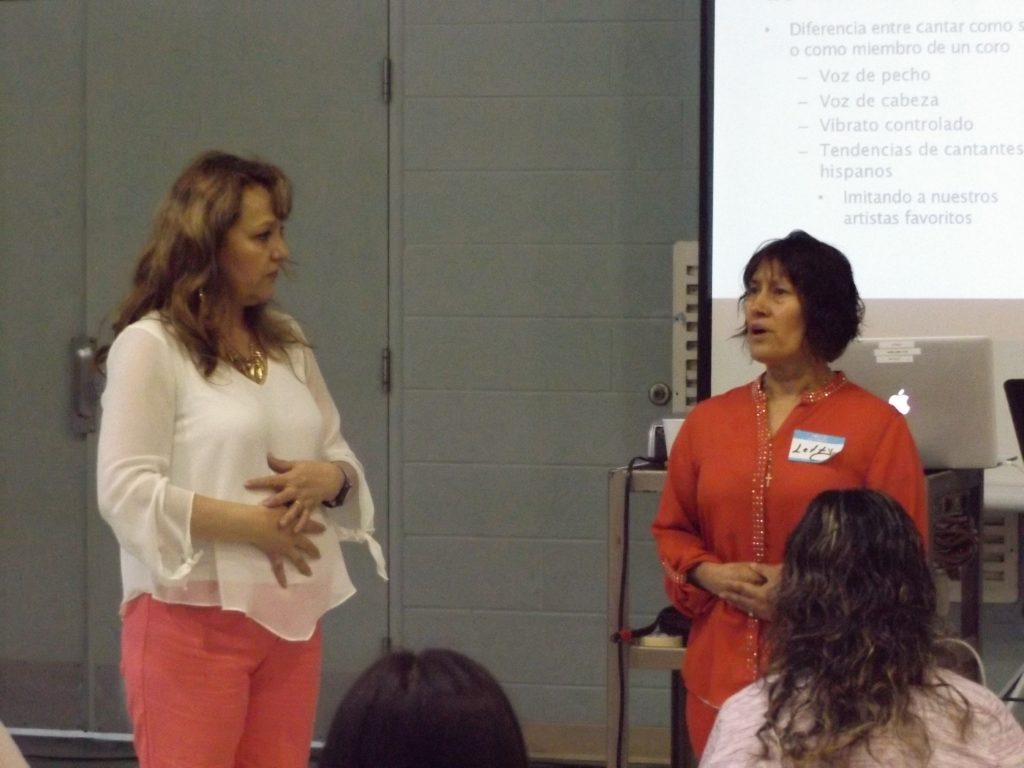 Estela Garcia-Lopez of Oregon Catholic Press demonstrates to Letty Lopez of St. Patrick Parish in Ligonier how to sing and breathe from the diaphragm during a breakout sessions with female parish vocalists in which she taught vocal and breathing techniques.

The bishop’s letter also stated that it was his desire on this day that “this occasion will serve to reconnect you to Jesus, to hear His call and that the love of God grows in your heart.”

Paul Van Leeuwen and his wife, Karen, are parishioners of St. Joseph, Fort Wayne, where Paul is an organist and guitarist for English and Spanish Masses. Paul had “struggled to find the right kind of ways to disseminate materials,” he said. “I’m grateful to the diocese for providing this kind of resource.” 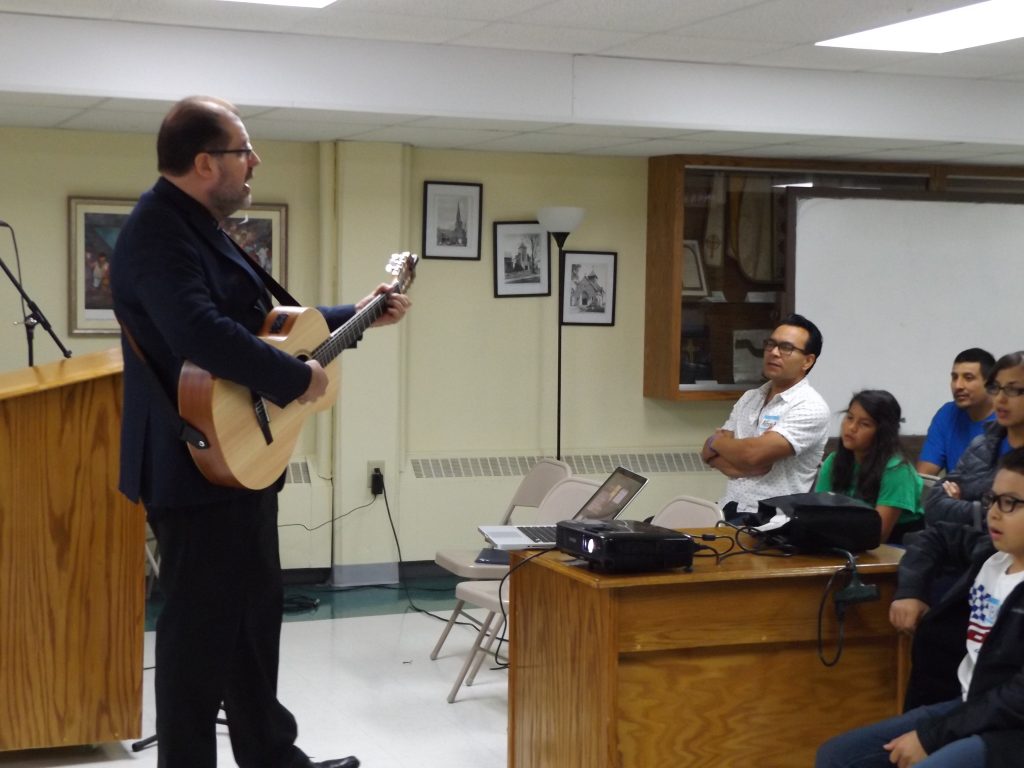 Santiago Fernandez of Oregon Catholic Press conducts a breakout session with instrumentalists at the workshop held June 15 at St. John the Evangelist in Goshen.

Karen appreciated the formation, and “learning about the actual document as to how and why we put the effort into music.” She added that it helped to understand songs through the structure of the Mass, and what is appropriate to a particular Mass and a particular parish.

Tenth-grade student Samantha Aucapina from St. Joseph said she learned more about “singing in the Spirit and practicing techniques” and enjoyed being with her fellow music ministers.

The choir director at St. Michael Parish in Plymouth, Kimberley Mendez, said the workshop was “very helpful, for my group of people, especially the music techniques and breathing techniques learned in the breakout session. Most have never had any formal training,” she said. “One of the most important parts of Santiago’s talk was (about) why our participation in the Mass is important. He broke it down into components.

“We don’t usually go over a lot of techniques — we have gone over fundamentals of choir. It was invaluable for them to hear we’re there to help and assist in worship, formation and prayer,” she said.

Reyes De Lira, choir director at St. Patrick Parish, Ligonier, said the workshop “helped a lot — especially in the way to manage songs in the Mass and to see the mistakes I was making.” He added that it helped him know how to discern the appropriate songs needed for different parts of the Mass.

Yareli Nopal, of St. John the Evangelist Parish, assisted with organization the event. “Everybody’s joyful to be here — it’s a great experience,” she said during the afternoon.

“Therefore, sacred music is to be considered the most holy, in proportion, as it is more closely connected with liturgical action,” Rubalcava said.

He stated in his presentation that the Church approves of all forms of true art having the needed qualities, and admits them into divine worship “whether it adds delight to people, fosters unity of minds or confers greater solemnity upon the sacred rites.”

He advised that in choosing the pieces and parts to be sung, preference should be given to those that are of greater importance; and especially to those sung by the priest or deacon, with the people responding, or by the priest and people together. Because musicians serve the community of worshippers also, he advised keeping in mind that people are more comfortable with a regular selection of songs or repetitive verses.

“Singing is one of the primary ways the assembly of faithful participates,” he told the attendees. “Music does what words alone cannot — it is capable of expressing dimensions of meaning and feeling words alone cannot.”

He also reiterated one of the overarching messages of the workshop: that “liturgical musicians are, first of all, disciples.”