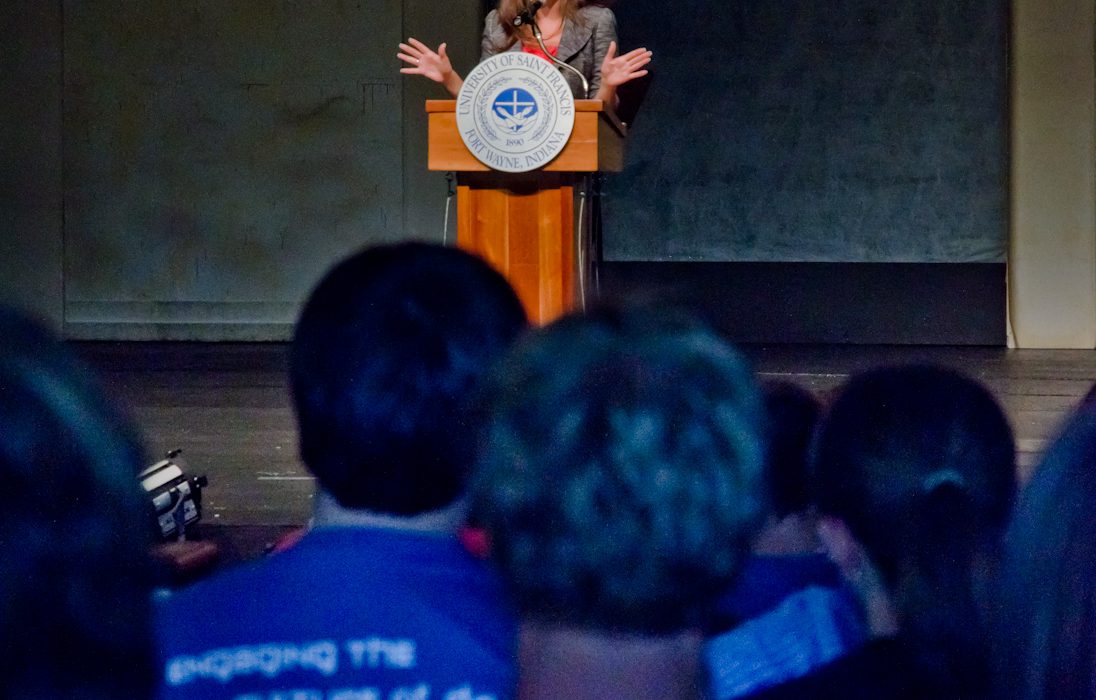 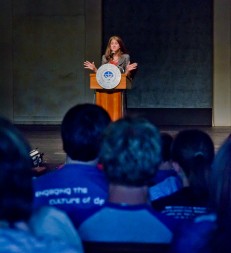 Lila Rose, president of Live Action, speaks at the opening of the seventh annual Friends for Life Boot Camp held at the University of Saint Francis, Fort Wayne on July 15.

Rose is best known as the UCLA student who went undercover, posing as an underage pregnant teenager in a relationship with a 31-year-old man and exposing illegal activities at Planned Parenthood facilities across the nation, including Indiana. Now a college graduate, she does pro-life work full time and speaks from the heart about life issues.

Rose’s opening remarks were directed to those in the audience, both adults and young people, who are interested in presenting the case for life in a persuasive and effective manner. The boot camp, which followed and continued throughout the weekend, featured pro-life training for high school and college students and drew 120 registrants — the best crowd ever — from across the state.

“Our generation has been targeted by the abortion industry,” said Rose.

She explained that, not only were young people of her age at risk of being aborted years ago, but now are being bombarded by pro-choice messages urging abortion of their own babies.

Her awareness of the abortion proceedure began at age nine, she said, when she read about it and wondered, “How can anyone do that to a baby?” Later, she learned about Roe v Wade.

Upon learning that more than 3,000 babies were being aborted each day in the U.S., she wondered again, “Is there something to do?”

She asked God to use her in the pro-life effort and said, “It’s been a crazy adventure since then.”

Rose’s first “targets for truth,” she said, were her 40,000 fellow UCLA students. Although the university’s health center was said to be performing 2,000 pregnancy tests annually, there appeared to be no pregnant women on campus.

“What were they telling students?” she asked herself.

Feigning pregnancy in a personal visit to the campus health center, she received no support for her supposed condition and only was given the option of abortion. She then decided to take her investigation to a Planned Parenthood clinic five minutes from her dormitory, where she received the same advice. The counselor advised her to “just pick a date” for her abortion.

With that appalling experience in mind, Rose launched an all-out attack on the abortion industry in general, and Planned Parenthood in particular, using her own money at first, then that of grass roots supporters, in a pro-life campaign that has spread like wildfire.

She founded Live Action, an organization that uses Facebook, Twitter and other social media to spread the pro-life message to young people, and it has quickly become the largest media organization in the country.

The most recent Live Action project goes even further by exposing complicity by Planned Parenthood in child slave rings. A video Live Action put on YouTube shows a counselor advising a person on ways to skirt the laws against child prostitution. Rose was horrified by this discovery and is more determined than ever to put a stop to these abuses.

Live Action literature calls the organization “a youth led movement dedicated to building a culture of life and ending abortion, the greatest human rights injustice of our time.”

“We are all touched so closely by abortion,” said Rose.

In closing, Rose exhorted her listeners, “Don’t be afraid to talk to people about your beliefs. Continue to have hope. We are on the winning side.”