Although Mary would not be considered an “influencer,” like many social media personalities, she still became the most influential woman in history by trusting “in the love and promises of God, the only force capable of making all things new,” Pope Francis told young people at the World Youth Day prayer vigil Jan. 26.

“Are you willing to be an ‘influencer’ like Mary, who dared to say, ‘Let it be done’?” he asked. “Only love makes us more human and fulfilled; everything else is a pleasant but useless placebo.” 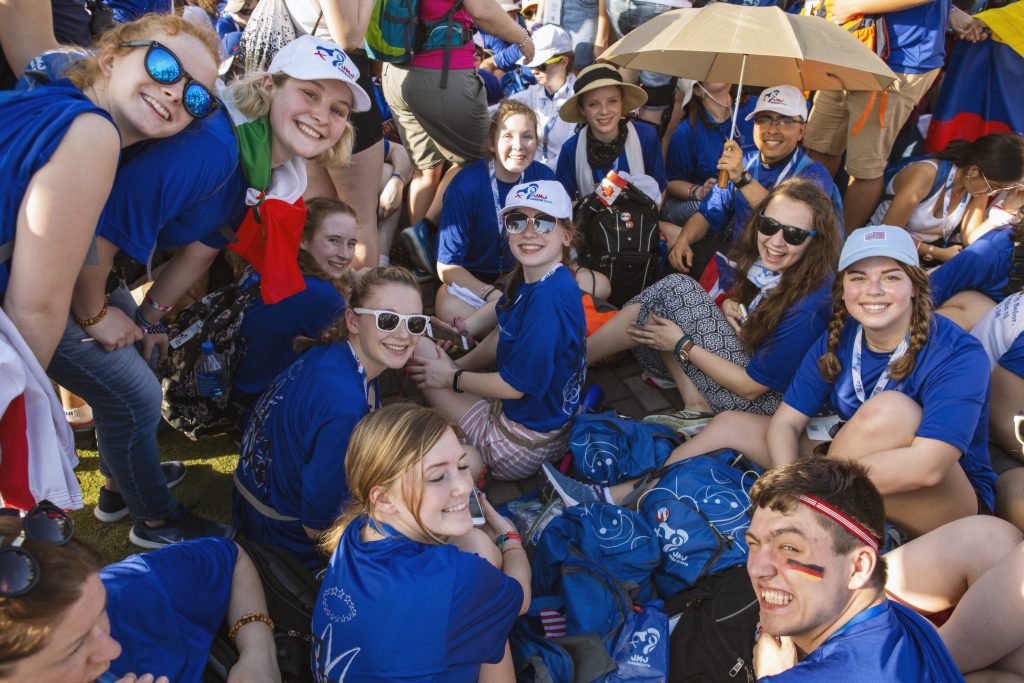 Pilgrims from the Diocese of Fort Wayne-South Bend — wearing Marian blue in honor of the World Youth Day theme of Mary’s fiat, or ‘yes’ to the Lord’s will — are all smiles at Santa María la Antigua Field, Panama City, Panama, prior to a World Youth Day Mass. Photos by Michael O’Sullivan

Despite sweltering temperatures in Panama City, hundreds of thousands of young men and women made their way to St. John Paul II Park on the penultimate day of World Youth Day. They brought sleeping bags and tents, prepared to spend the night at the field — praying the rosary, making new friends — before celebrating Mass with Pope Francis at 8 a.m. Jan. 27. The pope did not spend the night, but returned later in the evening to the apostolic nunciature.

Arriving in his popemobile, Pope Francis made his way through a sea of colorful flags and banners people waved excitedly.

After the pope took his place on the stage, young adults from Panama and the Palestinian territories gave their experiences of finding faith and hope amid doubt, sickness and addiction.

Erika de Bucktron, a 42-year-old mother of four from Panama, spoke of the fear and difficulties she faced when doctors said her pregnancy was at high risk after diagnosing her unborn daughter with Down syndrome. 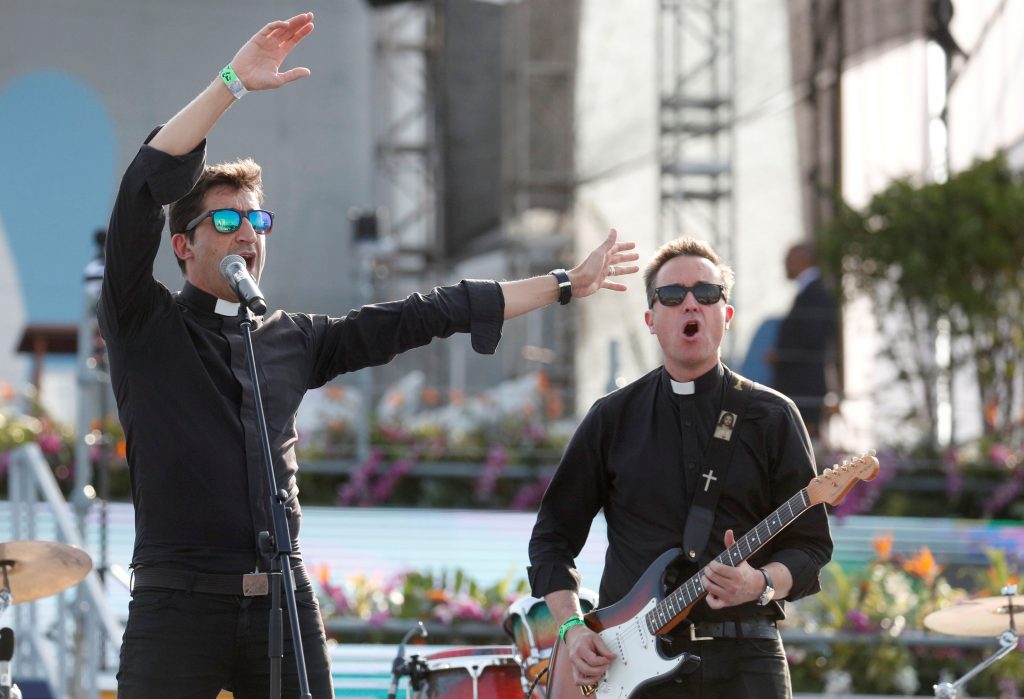 Throughout her pregnancy, she said, she and her husband abandoned themselves in God’s hands and, after the birth of their daughter, decided “to love her with all our hearts, without making any difference with our other children, who also welcomed her with so much love.”

Panamanian Alfredo Martinez Andrion, 20, recalled his experience of falling into a life of drugs and crime. His addiction, he said, ultimately led to a 12-month prison sentence. Despite attempts to reform following his release, he fell back again into drug use.

Ultimately, he found help at a Catholic-run halfway house that helped and encouraged him “in my path toward reintegration.”

“I want to tell the young people of the world that God loves us and never abandons us. We are the masters of our own actions, but if we are with God, everything will be OK,” Martinez said. 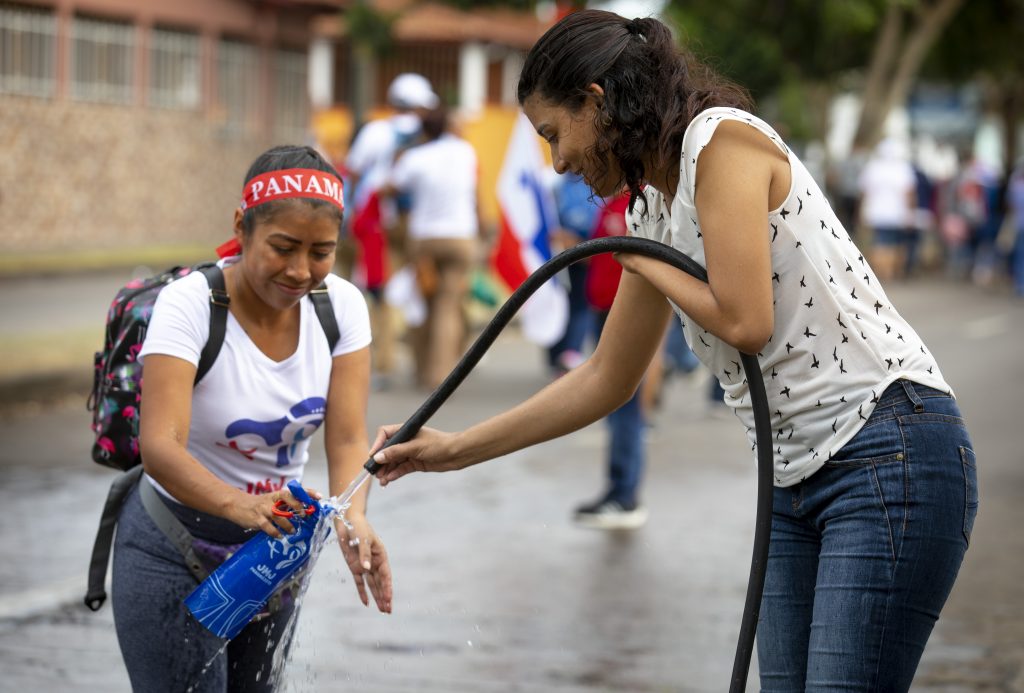 Nirmeen Odeh, a 26-year-old Palestinian woman, gave the final testimony of the evening, recalling that despite being born and raised in the Holy Land, she was apathetic to Christianity, especially coming “from a place where many of my simple rights are violated.”

“I thought it was better to be distant from Christianity so as not to be bothered by others,” Odeh said. “With all the struggles and weariness of daily life, I wasn’t interested in faith. However, I was curious about the idea of God! It fascinated me.”

After participating in World Youth Day 2016 in Krakow, Poland, Odeh said she took a “leap of faith” and began receiving the sacraments.

“And here I am today, three years later in Panama, excitedly praying for him (God) to lead me on my next journey,” she said.

The salvation that God wishes to give his children, he said, isn’t a file in the cloud waiting to be downloaded or the latest app, but rather is an invitation to be “part of a love story interwoven with our personal stories; it is alive and wants to be born in our midst so that we can bear fruit just as we are, wherever we are and with everyone all around us.” 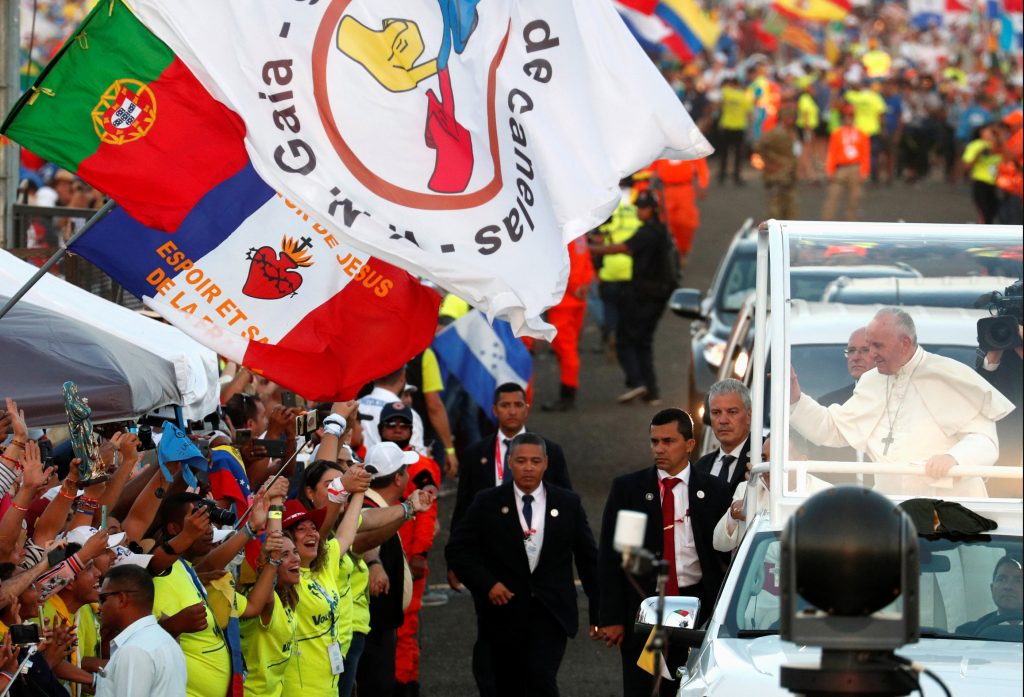 However, Christians can only obtain this salvation by placing their trust in God, especially in moments of uncertainty, doubt and trial.

Recalling the experience given by de Bucktron, the pope said the fears and difficulties the couple faced with the birth of her daughter meant embracing life, even “in accepting things that are not perfect, pure or ‘distilled,’ yet no less worthy of love,” he said.

God begins to write his great love story precisely through people’s problems, frailties and flaws, the pope said. Just as he embraced Peter after his denials, Jesus helps Christians stand up when they have fallen, the pope added.

Thanking Martinez for his testimony, Pope Francis said the experience of the young Panamanian shows that, without strong roots that are firmly grounded, “it is impossible to grow.”

Older people, he continued, must ask themselves what foundations they are providing to help young people grow instead of lobbing criticisms against them.

“It is easy enough to criticize and complain about young people if we are depriving them of the jobs, education and community opportunities they need to take root and to dream of a future,” he said.

The pope said that young men and women also need to be rooted in a community and a home that prepares their hearts and give them a sense of belonging.

Odeh’s experience, he explained, is proof that this belonging also gives a sense of identity that allows young people to “live the joy that comes from being found by Jesus.”

Pope Francis encouraged young people to not be afraid of opening their hearts to Christ and “embrace life with all its frailty and flaws, but also with its grandeur and beauty.

“Do not be afraid,” he said, “to tell Him that you, too, want to be a part of his love story in this world, that you are ready for something greater.”