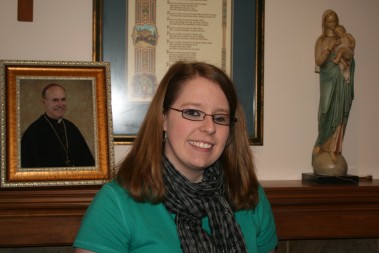 Danielle Collins, a junior at the University of Saint Francis is this year’s recipient of the Father Tom O’Connor Light of Christ Award.

FORT WAYNE — “I’m not feeding people like Father Tom did, but comforting people in a different manner,” says Danielle Collins, this year’s recipient of the Father Tom O’Connor Light of Christ Award. The award was created in 2006 by St. Mary’s Church to honor individuals whose life activities and faith exemplify the type of servant leadership for which Father O’Connor was known during his years as priest in Fort Wayne.

Collins, a 21-year-old junior at the University of Saint Francis, was surprised to learn that she had been chosen to receive the award. “It’s overwhelming — in a good way,” she says.

Hailing from Villa Park, Ill. where her parents Mary and James still reside, Collins says St. Alexander is her family’s home parish and the school that began her Catholic education. She graduated from Montini Catholic High School, where she was involved with campus ministry, before coming to the University of Saint Francis (USF).

In keeping with her lifelong interest in the creative aspect of art, this conscientious student studies graphic arts and Web design in a full-time program at USF that will equip her to someday fulfill her dream of becoming a graphic arts instructor for a Catholic high school. And coming from smaller class sizes in both elementary and high school, USF’s family atmosphere has been an added perk.

“I wanted them to know me by name. And that’s what I’ve found here,” she says.

In addition to her full load of graphic arts classes, Collins takes additional classes to earn a minor in theology, a subject dear to her heart.

“My faith has always been really important to me,” she says. And that faith has sustained her through the challenges of life as well as in the many activities in which she is involved.

As a member of the USF student government Collins holds seats on several committees including Service Integrating Root Values (SIRV) where she is involved in organizing and connecting students for service projects such as Habitat for Humanity, the Trick-or-Treat canned goods drive and USF Feeds the Fort.

Campus ministry keeps this energetic young woman inmmersed in service events as well and as a peer minister. As sacristan she sets up for Mass on campus each Sunday evening as well as scheduling for each liturgy. She helps organize each semester’s campus retreat sponsored by campus ministry and as service outreach assistant she is excited about being part of the opening in August of the new service engagement center where students will be able to connect to appropriate service opportunities and track their service hours as well.

Additionally, for the past two summers Collins has been involved in working with registration for the national conferences the organization hosts. Recently she manned the phone lines at the national office and took bereaved parents questions. “It was hard, but I feel like I comforted them,” she says. She understands that her experience of loss helps create a special bond with those bereaved parents who call searching for solace. “They just need to tell their story,” she reports and adds that she was there to listen.

Recently, amidst all that this young award winner does to serve her community and church, she was selected to make a pilgrimage to Rome and Assisi through the Association of Franciscan Colleges and Universities. Of the trip she says, “I have more of a connection to both saints (Sts. Francis and Claire). The trip strengthened my faith.”

Of her life this remarkable young woman says, “Everything I do — the extracurricular service and my class work — I balance it. My experience wouldn’t be the same without the balance. I value my education as much as the activities I’m a part of. They go hand-in-hand for who I am.”

Of the award honor Collins feels, “It was very nice of them to recognize me as a college student.” She says naturally, “I enjoy helping others. I feel like it’s what I’m supposed to do. I grow from it. … Everything happens for a reason.”
The Father Tom O’Connor award was presented to Collins at a luncheon at St. Mary Parish on March 26.