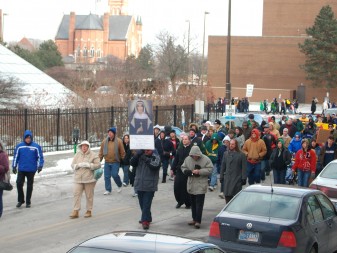 Parishioners of the St. Mother Theodore Guerin Latin Mass community march through downtown Fort Wayne at the Jan. 30 Rally for Life and March in Fort Wayne were among the 1,500 who took part in the day’s activities which began with a rally and talk by Abby Johnson at the Scottish Rite Auditorim.

FORT WAYNE — Rally for Life speaker Abby Johnson gave her listeners an “inside view” of the effectiveness of pro-life efforts around the nation during her remarks Saturday, Jan. 30, at the annual Rally for Life at the Scottish Rite Auditorium in downtown Fort Wayne.

Johnson, a former director of a Planned Parenthood facility in Bryan, Texas, exclaimed, “What a difference a year makes,” in her conversion to a pro-life attitude. She noted that “God began to open my heart and open my eyes” when the facility where she worked began gearing up to do late-term abortions — as late as 24-weeks gestation. When she challenged that plan and suggested that prevention services should reduce the number of abortions and that perhaps those babies should be carried to term, she was horrified to hear, “Abby, you need to get your priorities straight — abortion is our priority.” At that point Johnson began to question her career with Planned Parenthood.

She said she soon realized that “Planned Parenthood is based on lies.” As a counselor, she was advised to rely on carefully scripted answers to “tough questions” from young women seeking abortions. Those women often asked for spiritual reassurance to support their decisions. They worried whether they would go to hell for seeking an abortion and what would happen to their baby’s soul.

A frequent query was whether the baby would feel any pain during the procedure. After witnessing one tiny baby’s fruitless struggle to avoid the suction instrument being used during its abortion Johnson perceived “the baby felt it.” And she knew that she had personally lied to hundreds of women who asked those questions. She began to wonder, had she not lied to them, whether those mothers would have chosen life for their babies. She remarked on similar spiritual struggles going on in the minds of other women and in the clinic staffers who serve them.

“We never know what God’s plans are,” said Johnson. “I’m here to encourage you. … From an insider’s perspective the work that you do, does make a difference.”

She cited especially the prayerful protests she saw each day at her clinic and how she felt not anger or judgment from those protestors, but love. And that loving attitude helped her to find the right path for herself, she pointed out.

Johnson noted that the more legislative barriers are erected, the harder it is for abortion clinics to continue their daily activities, so it is especially important for pro-life proponents to continue to work with their elected officials. Johnson affirmed that centers across the nation are closing their doors due to the difficulty of doing business but that information is kept from the general public.

Dozens of pro-life elected officials in attendance were introduced and their legislative work applauded by the crowd. Two had held a news conference in advance of the rally to provide updates at the state and federal level. State Senator Marlin Stutzman, R-Howe, reported on legislation to defund Planned Parenthood in Indiana and U.S. 3rd Dist. Congressman Mark Souder commented on the impact of healthcare reform on life issues.

Listeners were reminded of the legislative forum scheduled for Thursday, Feb. 18, at Concordia Seminary for the latest information on pro-life efforts.
Allen County Right to Life Executive Director Cathie Humbarger summed up the prevailing pro-life attitude in calling it her “sad privilege” to open the 36th annual event in Fort Wayne. She remarked, “Some day we will celebrate that no unborn child will face abortion.”

The rally was followed by the annual March for Life through the streets of downtown Fort Wayne. The rally and march, which drew nearly 1,500 people, was the largest event in Indiana marking the anniversary of the Roe v. Wade Supreme Court decision on Jan. 22, 1973.