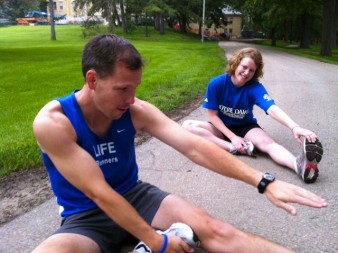 SOUTH BEND — Pat Castle is a man on a mission. A graduate from the Air Force Academy in 1993 and currently a lieutenant colonel at Scott Air Force Base near St. Louis, Castle found time for one additional mission in his busy career and family life. In 2008, he founded LIFE Runners for two different groups: those who love to run and would like to become more involved in the pro-life cause, as well as those who are involved in the pro-life cause and would like to learn how to run a marathon. He’s been coaching a growing group of men and women ever since.

This June, Castle made his way to the University of Notre Dame to participate in the summer Vita Institute organized by the Center for Ethics and Culture. As the pro-life institute would last for two weeks, Castle knew he would have time to begin training a new group of would be pro-life marathoners. In short time, Castle has recruited a Notre Dame student runner, Matt Povlock, not only to participate but to also lead a Notre Dame chapter of the group.

One morning at Notre Dame, Castle and a group of seven were stretching and preparing for a run. Among them were novice runners, but others were already very experienced. Heather McCleery, Notre Dame program manager of the Advanced Diagnostic and Therapeutics Initiative, has already finished six marathons. She is planning to run as a LIFE Runner this October in the Wineglass Marathon in New York. “I’m trying to break the three-hour mark,” she said. When asked about being a LIFE Runner, she responded that she was happy to be able to add a witness of her beliefs to her running.

Anne Peterson, a Notre Dame philosophy grad student, began running in her high school years and hopes to run her first marathon with a group of LIFE Runners at Kansas City in October. She has long been involved in the pro-life cause and appreciates this program as another way to become even more involved.

Rosemary Kelly, a Notre Dame junior in geoscience, believes that “the best thing about Life Runners is that it is a collision of two favorite loves: running and the pro-life cause. I definitely want to do a half-marathon at Kansas City and maybe even a whole marathon. I run around the lakes at least four times a week. I’m definitely excited to have a pro-life cause to do that for. I think it’s great that in a Catholic environment there are people who will take running and join it to the idea of Catholic identity.”

When Castle was asked what keeps him going, he said, “I do it for the unborn and their mothers. I try to make my running into a prayer. It might seem unrealistic, but it’s my best prayer because when I am running and feeling weak, and my strength starts to dissipate, I reach out to God and ask Him to fill me. So, that’s the time that I pray to God. It gets me up in the morning.”

When Castle was asked if he ever watched the movie “Chariots of Fire” that tells the story of two very different British men, Harold Abrahams and Eric Liddell, who are preparing to run in the 1924 Paris Summer Olympics, he said he had, and offered this insight: “The one man, after winning the medal, that was it for him. The other saw it as part of his journey (with God). He had an eternal perspective.”

More information on LIFE Runners is available at their website www.run.lifegroup413.org. To get involved with the ND Chapter, contact Chapter Champion Matt Povlock at [email protected]