WASHINGTON (CNS) — With the 6-3 Supreme Court decision June 15 banning job discrimination against individuals in the workplace identifying as LGBTQ, the Catholic Church in the United States has a new moment of reckoning.

But it may be too early to tell what the full impact of the ruling will be.

In response to the court ruling, which found that discrimination on the basis of sex also includes gender identity, Los Angeles Archbishop Jose H. Gomez, president of the U.S. Conference of Catholic Bishops, said, “Every human person is made in the image and likeness of God and, without exception, must be treated with dignity, compassion and respect. Protecting our neighbors from unjust discrimination does not require redefining human nature.”

The Vatican Congregation for the Doctrine of the Faith in its 1992 document, “Some Considerations Concerning the Catholic Response to Legislative Proposals on the Non- Discrimination of Homosexual Persons,” said that “it is not unjust discrimination to take sexual orientation into account” in the areas of “adoption or foster care, in employment of teachers or coaches, and in military recruitment.”

Adoption and teacher employment are precisely the two issues the Supreme Court has yet to decide in its current term, which is expected to conclude in early summer.

When taken together with the sexual-orientation discrimination case, the justices’ rulings could force the Church, as an employer, into a new model of doing business, but it may be too early to tell.

“Parties relying on the Supreme Court need to be careful, and that there’s always risks in going to the court,” said Alexander Dushku, a member of the First Amendment and religious organizations, litigation and appellate sections for the Salt Lake City law firm of Kirton McConkie.

“The Supreme Court sought to assure religious employers that there are plenty of tools the court has to protect their legitimate interests, but did not actually decide those question because they were not at issue before the court,” Dushku said. “ I personally think the court is going to be at least moderately generous to serious religious organizations.” 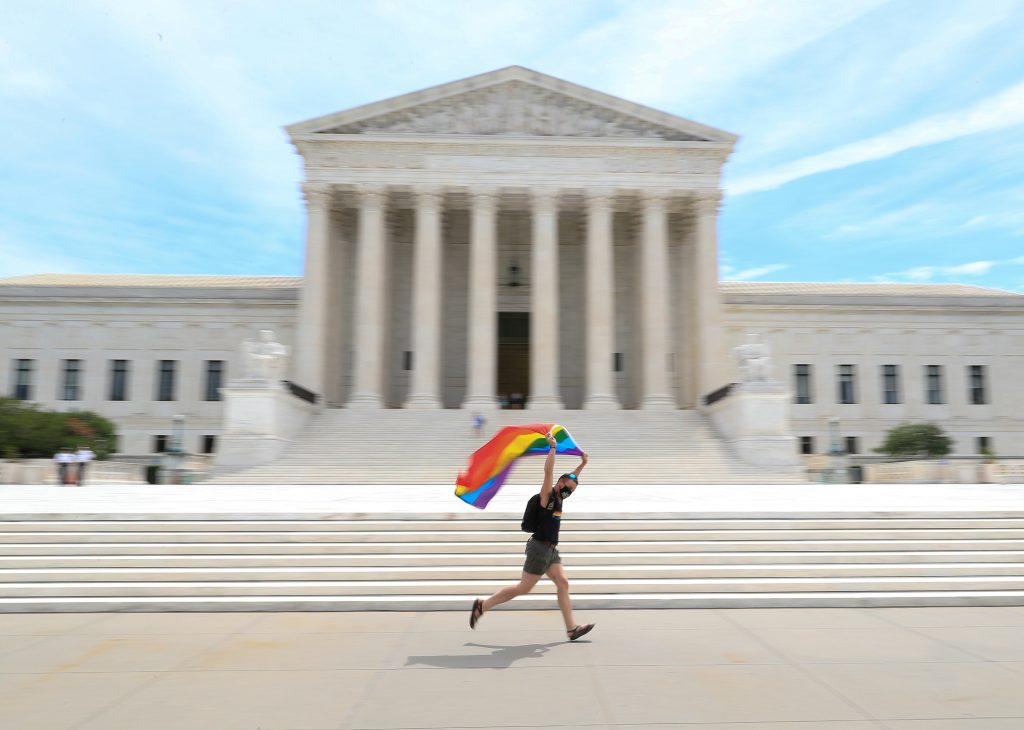 A person runs with a gay pride flag in front of the U.S. Supreme Court building in Washington June 15, 2020. In a 6-3 vote that same day, the Supreme Court said LGBT people are protected from job discrimination by Title VII of the Civil Rights Act of 1964. (CNS photo/Tom Brenner, Reuters)

A guidance memo distributed June 18 by the U.S. Conference of Catholic Bishops’ Office of General Counsel to state Catholic conference directors and diocesan attorneys appears to agree with Dushku’s assessment. “The court,” it said, “leaves religious liberty conflicts to another day.”

The impact on Catholic institutional practices as employers “is yet to be seen,” said Michael Moreland, a professor of law and religion at Villanova University in Philadelphia and director of the college’s Eleanor H. McCullen Center for Law, Religion and Public Policy.

Moreland said it is his belief that the “ministerial exception” for employees at Catholic institutions is well-established. Many Catholic elementary and high schools and parishes have a clause in employment contracts declaring that the employee is a minister. However, he added, that is far less likely to happen “in larger institutional settings — Catholic universities, hospitals, social service agencies — where it would be difficult to say that everybody counts as a quote-unquote minister.”

Moreland also cautioned against thinking the Supreme Court decision will affect only secular employers. “The funeral home (defendant in the LGBTQ case) actually raised a religious freedom defense under the Religious Freedom Restoration Act, but didn’t pursue that on appeal in the Supreme Court because it was rejected by the circuit court below,” he said.

Mary Hunt, a lesbian Catholic theologian who heads the Women’s Alliance for Theology, Ethics and Ritual in the Washington suburb of Silver Spring, Maryland, has been following LGBTQ issues in the Church since before WATER was founded in 1984.

Hunt said a friend of hers, a former judge, said many in legal circles “weren’t anticipating the breadth and scope and straightforwardness of the decision,” adding it could have greater scope than the high court’s 2015 ruling affirming same-sex marriage because in the latter case, “it only involves people who want to get married.”

“Where I think a lot of Catholic institutions and dioceses have been struggling with some of these issues,” she said, is with a “widespread reluctance to fire someone merely for being gay or lesbian. But then the cases where you’ve seen the institutions taking action, for example, is if a religious ed teacher enters into a same-sex marriage and the institution feels it compromises its ability to witness to the faith in that context,” citing recent cases in the Archdioceses of Indianapolis and Philadelphia.

Lisa Fullam, who teaches moral theology at the Jesuit School of Theology of Santa Clara University in California, suggested in a June 19 essay published by New Ways Ministry, an unofficial Catholic organization that ministers to LGBTQ Catholics, the Church must reform its position.

The Catechism of the Catholic Church, quoting from the Second Vatican Council document “Gaudium et Spes,” holds that “every form of social or cultural discrimination in fundamental personal rights on the grounds of sex, race, color, social conditions, language, or religion must be curbed and eradicated as incompatible with God’s design.” The catechism also teaches that gay people must be accepted with “respect, compassion and sensitivity.”

But for gays and lesbians, Fullam noted, the catechism says only that “every sign of unjust discrimination in their regard should be avoided.”

“’Just discrimination’ that has been supported by Church leaders is expansive,” she said, echoing some of the areas mentioned in the Doctrine of the Faith document: “military service, adoption, employment, housing and marriage, just for starters.”

Regarding marriage, the Catholic Church teaches that it is between one man and one women, and based on its upholding of traditional marriage, it is against placing children with same-sex couples for adoption.

Rather than taking every employment dispute to the Supreme Court, Fullam argued, “Catholic social teaching should inspire church leaders to err on the side of employees, on the side of human dignity, and on the side of this week’s historic decision.”