At the start of each judicial year, Catholic legal professionals gather together to pray and worship, invoking the Holy Spirit. The St. Thomas More societies of South Bend and of Fort Wayne will host Red Masses on Sept. 30 and Oct. 1, in honor of the Holy Spirit and to seek His gifts, such as wisdom, understanding, counsel, patience and courage, which are necessary for the administration of justice. Bishop Kevin C. Rhoades will celebrate the Masses. 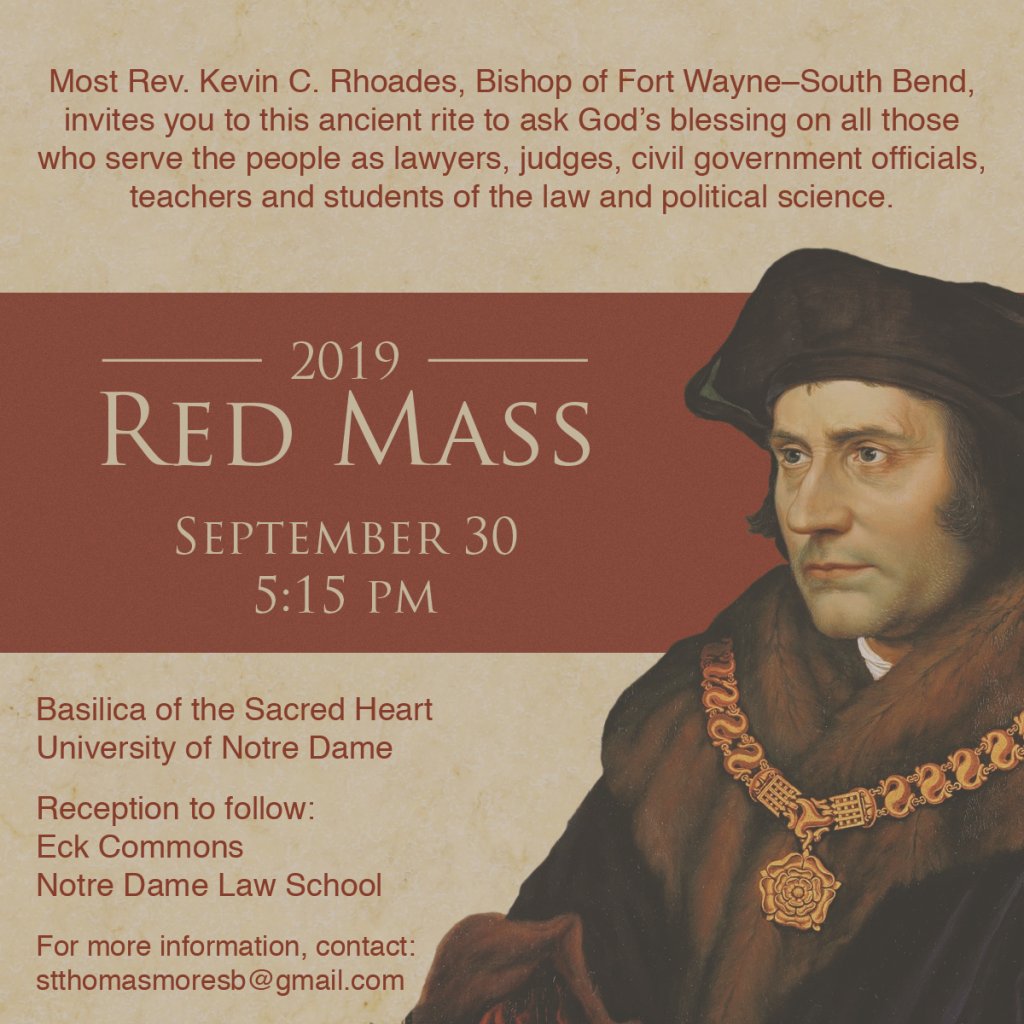 In South Bend, the liturgy will begin at 5:15 p.m. Sept. 30 at the Basilica of the Sacred Heart on the campus of the University of Notre Dame. A heavy reception at Eck Commons at The Law School follows. Bishop Rhoades and G. Marcus Cole, dean of the school, will address attendees. 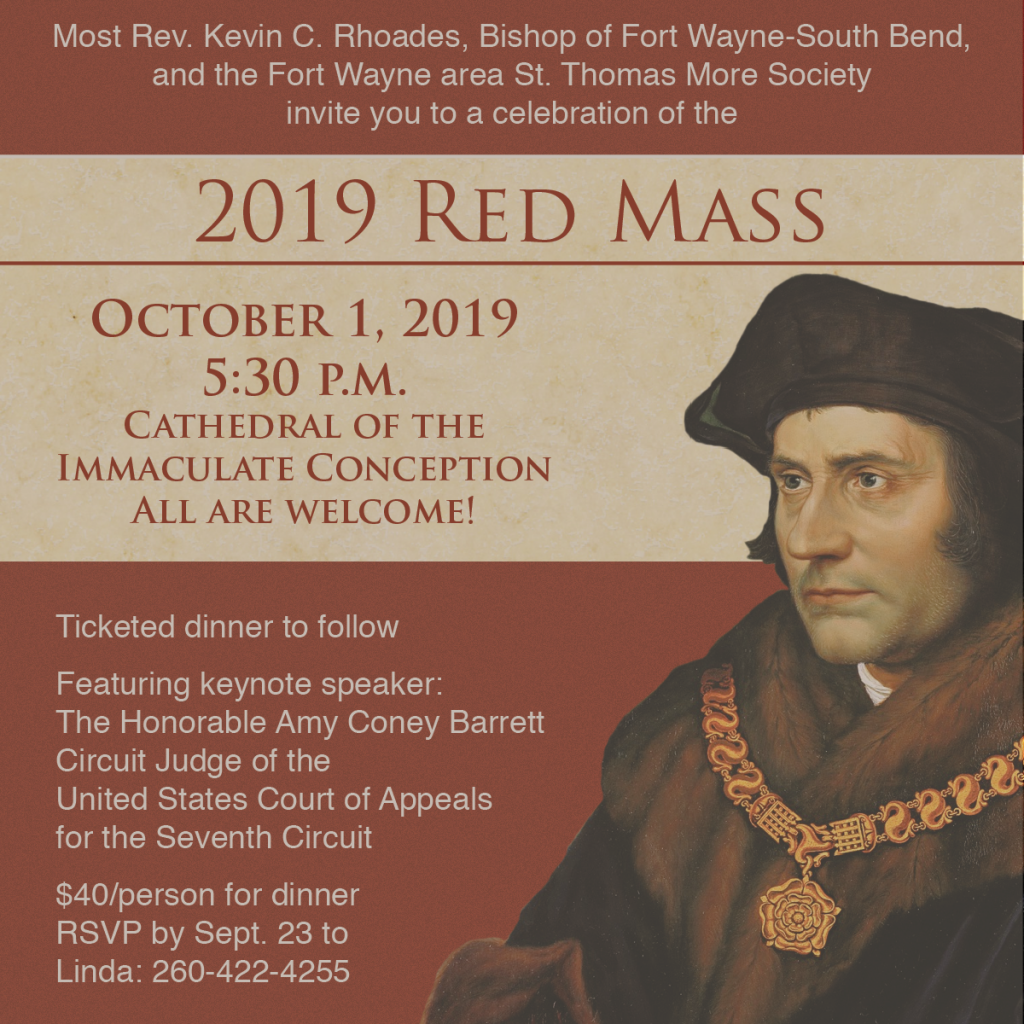 In Fort Wayne, the annual Red Mass will be celebrated Oct. 1 at 5:30 p.m. at the Cathedral of the Immaculate Conception. A dinner reception will take place at the Archbishop Noll Catholic Center: Reservations are required to attend the dinner. Guest speaker Judge Amy Coney Barrett of the U.S. Court of Appeals for the 7th Circuit, will address St. Thomas More Society members and others present.

Scott Hall, attorney for the diocese, shared: “Judge Barrett’s presence will be especially meaningful given the grilling she got by Senate committee members when she was nominated for the appellate court post a couple years ago. Her Catholic faith and beliefs were brought front and center (and) used as evidence to question her suitability for the position.”

Hall, along with Judge Kenton Kiracofe of Wells County, who heads the Fort Wayne St. Thomas More Society, welcomes all members of the legal profession to the Red Mass.

Before serving on the bench, Judge Barrett was a professor at The Law School, where she still teaches. She earned her J.D. summa cum laude from Notre Dame, where she was a Kiley Fellow. She earned the Hoynes Prize, The Law School’s highest honor, and served as executive editor of the Notre Dame Law Review. She clerked for Judge Laurence H. Silberman of the U.S. Court of Appeals for the D.C. Circuit and for Associate Justice Antonin Scalia of the U.S. Supreme Court. As an associate at Miller, Cassidy, Larroca and Lewin in Washington, D.C., she litigated constitutional, criminal and commercial cases in both trial and appellate courts.

The Red Mass through the centuries

The Red Mass has been celebrated by the Catholic legal society since the 12th century. Early records from Paris, France, indicate a Red Mass being celebrated in 1245 and in medieval England about 1310.

The date was pegged to the beginning of the “Michaelmas Term,” the quarter year beginning around the feast of St. Michael on Sept. 29.

The Red Mass came to the U.S. in October of 1928. It was first celebrated in New York’s old St. Andrew Church, located in the shadow of towering state and federal courthouses. Red Masses gained popularity toward the end of the 19th and beginning of the 20th centuries, and the most well-known Red Mass is offered at The Cathedral of St. Matthew the Apostle, Washington, D.C. It’s often attended by Catholic supreme court justices and other prominent judges and politicians.

Originally, the long robes the lord high justices and judges in the 12th and 13th century in England were bright scarlet. Spiritually, too, there is a connection to the color red. Red is the liturgical color of the Holy Spirit, as seen during Pentecost. The venerable custom of calling this Mass a Red Mass derives from the red vestments of the celebrant, representing the tongues of fire of the Holy Spirit.

“The reason the judicial year begins in October is also historical and traditional. The English year was divided into four quarters, each beginning on a ‘Quarter Day,’” Judge said. “Michaelmas was the beginning of the autumn quarter and marked the return from summer recess for many institutions, including courts and schools. The tradition carried over to the United States, and each U.S. Supreme Court term begins in October and runs through the end of June.” For most courts there’s no similar summer recess, however.

Subject to the Truth

For the faithful practicing the legal profession, the Red Mass is an important marker in both their personal and professional lives.

“Although the Red Mass dates to a time when there wasn’t nearly as much formal separation between Church and State, it’s still very significant for the legal community and individual practitioners to gather with our bishop and invoke the blessing and guidance of the Holy Spirit for our professional and personal lives,” Judge said. “For one, it provides a public witness to our belief that all human law and legal institutions are ultimately accountable to divine law and that we can, and indeed must, call upon God’s assistance in creating, interpreting and executing our own laws. On an individual level, the Red Mass helps remind Catholic lawyers that we cannot live an integral life by separating our professional pursuits from our faith and that the power we have as lawyers and judges must always be subject to the Truth.”

St. John Paul II wrote of St. Thomas More: “His life teaches us that government is above all an exercise of virtue. Unwavering in this rigorous moral stance, this English statesman placed his own public activity at the service of the person, especially if that person was weak or poor; he dealt with social controversies with a superb sense of fairness; he was vigorously committed to favoring and defending the family; he supported the all-round education of the young. His profound detachment from honours and wealth, his serene and joyful humility, his balanced knowledge of human nature and of the vanity of success, his certainty of judgement rooted in faith: these all gave him that confident inner strength that sustained him in adversity and in the face of death.”

The St. Thomas More Society is a private, professional association affiliated with the Diocese of Fort Wayne-South Bend, serving under the oversight of Bishop Rhoades. The St. Thomas More Society promotes the mutual interaction of faith and culture in the realm of law and public policy. Any lawyer, member of the judiciary, canon lawyer, law professor or student at an American Bar Association accredited law school residing, practicing, serving or studying is eligible to apply for membership.