FORT WAYNE — Law is shaped by culture. In fact, the two reinforce each other, which is why one of today’s biggest challenges comes from the direction of modern culture.

At Red Masses celebrated Oct. 5 at the Cathedral of the Immaculate Conception, Fort Wayne, and Oct. 26 at the Basilica of the Sacred Heart, Notre Dame, this and other realities were acknowledged by Bishop Kevin C. Rhoades for the attorneys, clerks, students and teachers of the law who were present. Catholics, the bishop said, live their faith in a world often at odds with its truths, as evidenced by the extreme individualism, relativism and materialism demonstrated by many people today. It’s a challenge to be a faithful Catholic in the midst of a culture that is not open to the transcendent truths of faith and reason, especially for those engaged in the interpretation of that mutual reinforcement, he told them. 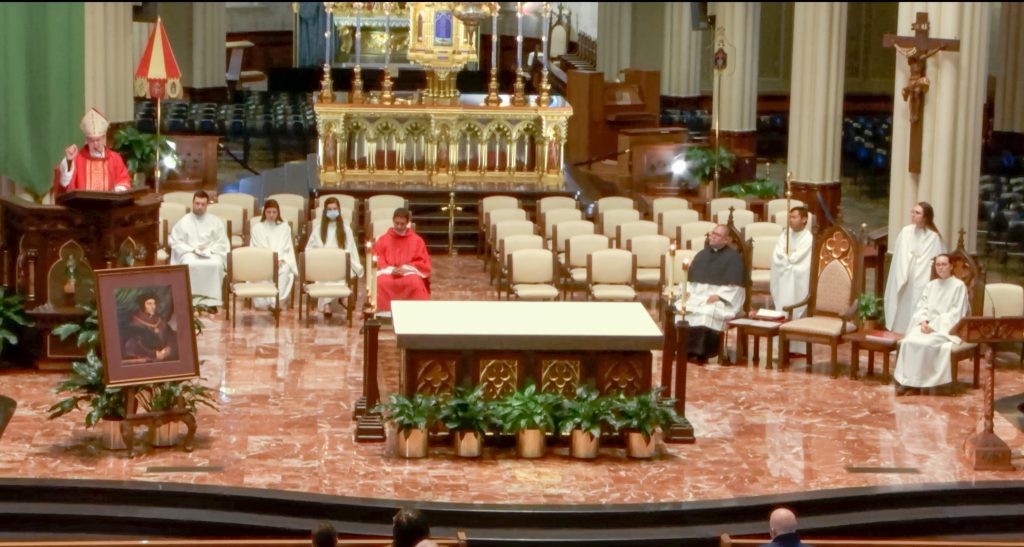 Livestream image
At a Red Mass Oct. 26, Bishop Kevin C. Rhoades proposed suggestions for pursuing holiness in a world often at odds with the truths of the Catholic faith. The liturgy for legal professionals was celebrated at the Basilica of the Sacred Heart, Notre Dame.

In addition to offering a blessing for those charged with that responsibility, he proposed suggestions for pursuing holiness in such an environment.

“Never cooperate illicitly with evil” was the first suggestion. The bishop explained: “Of course, judges must follow the law in the cases that come before them, but there is a moral duty to recuse oneself if the law would require one to perform an intrinsically evil act or cooperate with evil in a manner that is morally impermissible.”

“Always pursue justice” was the second suggestion. “Your service of the needs of your clients may prove a challenge if your client wants you to engage in conduct that you know to be unjust and immoral, even if it might be legal. You are always obliged to follow your properly formed conscience in these matters.”

“Some legal ethicists hold to what is called “role morality,” a position popular today in legal ethics,” he elaborated. “Proponents of role morality hold that a lawyer must do what the client wants, as long as it is legal. The lawyer thus assumes an amoral role. This theory exalts autonomy above the objective good and it exempts a lawyer from any measure of accountability for assisting his or her client’s immorality.” But Catholic lawyers are to pursue justice above the self-serving interests of their clients. “To exalt one’s client’s will and autonomy above the common good, ignoring the goods of truth and respect for others, is problematic. True justice cannot be reduced to doing whatever one’s client desires.”

Avoiding greed in all its forms was the third suggestion offered.

“This command comes from Jesus and is addressed to all His disciples, to you and to me,” the bishop said. “You are well aware that the noble legal profession has been adversely affected by our materialistic culture. We need only consider the environment of some mega law firms in which profit reigns supreme, despite the human costs. The ultimate aim is not the attainment of justice, but the maximization of profits.” A Catholic lawyer should be troubled by this, he continued, “since he or she knows, as Scripture teaches, that the love of money is indeed the root of all evil. “

“The culture of some law firms reflects the culture of our materialistic society,” he noted. “The Church encourages leaders of law firms to create a different culture, an evangelized culture. One way to do this is to hear the cry of the poor and the needy by serving the least fortunate pro bono or with reduced charges, according to their means.”

The Lord calls all people to be saints, to holiness. The Council Fathers stated the following, Bishop Rhoades said: “Strengthened by so many and such great means of salvation, all the faithful, whatever their condition or state, are called by the Lord – each in his or her own way – to that perfect holiness by which the Father Himself is perfect.”

He invited those present to think about how they could be credible witnesses to Jesus and His Gospel.

“You are called to be Christ’s disciples not only at home or at church, but also in your law offices and courtrooms. You are called to witness to Christ to your co-workers, your clients, and even your opponents by your goodness, by your integrity, and by your charity. The call to holiness includes working in the legal profession with integrity and skill in the service of your clients and also by working for the common good and renouncing personal gain. The graces of your Baptism and Confirmation are not to be put aside when you go to work nor the Holy Spirit left outside when you enter the courtroom.”

The path to holiness always involves in some way the cross, he added, “heeding our Lord’s words in the Gospel today about denying ourselves and taking up our cross daily in following Jesus. St. Thomas More, the patron saint of lawyers, heeded those words as he gave his life for the sake of Jesus. Jesus said: ‘What profit is there for one to gain the whole world yet lose or forfeit himself?’” 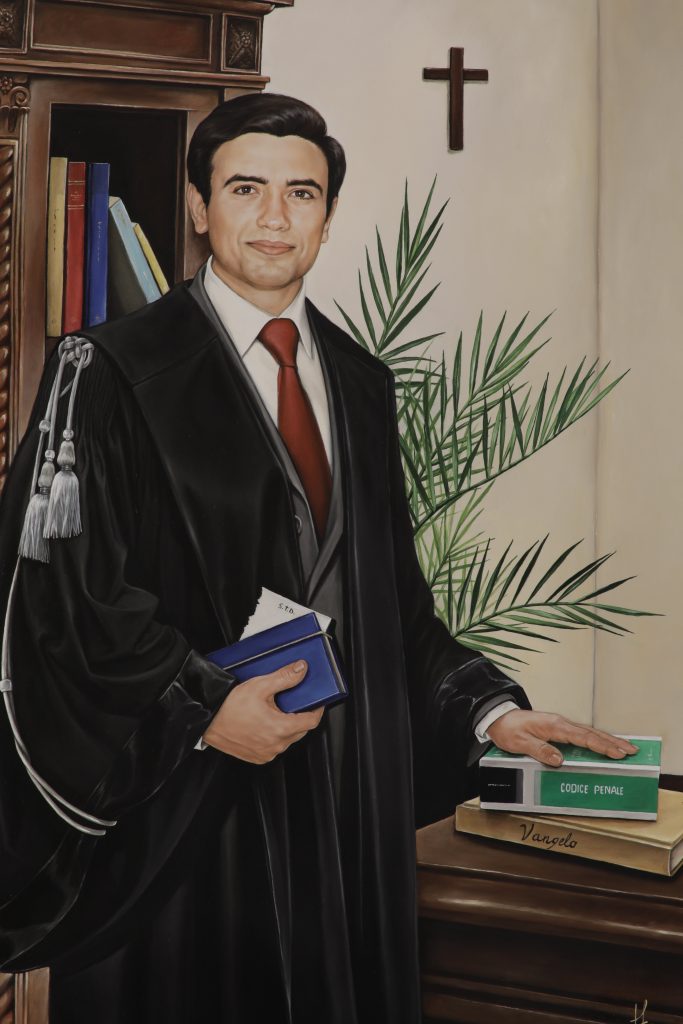 An Italian prosecutor who died in 1990 pursued justice in his work, but also upheld the supreme law of the Gospel in the face of notoriously intimidating circumstances. At this year’s Red Masses, Bishop Rhoades recounted Blessed Rosario Livatino’s story for the Catholic legal professionals present: The following is excepted from his homily.

Livatino worked as a prosecutor in Agrigento dealing with the criminal activity of the mafia in the 1980s, confronting the corrupt system of mafia bribes and kickbacks given for public work contracts. In 1989, he became a judge at the young age of 37. In a culture deeply affected by the public evil of the mafia, Blessed Rosario, throughout his career, worked against corruption and gained success in a number of cases, obtaining the seizure of large sums of money and property, and the arrest of senior figures in organized crime.

Blessed Rosario not only pursued justice in his work, but also pursued the supreme law of the Gospel, which is charity. He once said: “Justice is necessary, but not sufficient, and must be overcome by the law of charity which is the law of love, love of neighbor and God.” He knew that only charity solves problems at their roots.

In Blessed Rosario’s writings, the letters S.T.D. were found at the top of the pages, standing for “sub tutela Dei,” which means “under the tutelage or guardianship of God.” In everything he did, he knew that God’s sight was upon him. This is how the young judge lived his life: under the sight of God, in the light of faith. On his desk was always a crucifix and the New Testament, the pages of which were underlined and crumpled, he read it so often. He drew his profound wisdom from the Gospel, the teachings of the Church, and the lives of the saints.

This young Catholic judge provided a credible witness of coherence in his life of faith and his daily work. He knew that the Christian is called to be the light of the world and the salt of the earth, who must sanctify the world through one’s daily life and work. He is a model for those in the legal profession of courageous integrity, dedication to justice and the common good, and witness to Jesus and the Gospel in one’s profession. He lived the Christian faith not only when he passed through the doors of the Church, but also when he passed through the doors of the court. He did not hesitate to take sides in defense of the truth and in the protection of the victims of the mafia, even at the cost of his own life. Unlike many other judges, politicians, and other public officials, Blessed Rosario avoided any questionable contact with, or dubious favors from, mafia families. He would not stop investigating or prosecuting cases when the defendants were affiliated with the mafia, despite the risks that entailed. As a result, he was soon hated by the local bosses, who eventually ordered his assassination.

On Sept. 21, 1990, assassins rammed Judge Rosario’s car while he was driving to court. They shot at him through the windows both from a car and from a motorcycle. Rosario was wounded in his shoulder. He left his vehicle and started to run away. The killers chased him and kept shooting. Rosario lost one of his shoes and fell down. Then, looking at the man who was about to shoot the last bullet, he said: “Cosa vi ho fatto, picciotti?” “Guys, what have I done to you?” There was no condemnation or hatred in his words. These words remind us of the words of Jesus we chant at the Good Friday liturgy: “My people, what have I done to you?”

Blessed Rosario Livatino was just 38 years old when he was assassinated. He has since inspired a generation of Catholic lawyers in Italy and beyond. St. John Paul II called him “a martyr to justice.” On the day of his beatification, Pope Francis said: “We give thanks to Rosario Angelo Livatino for the example he leaves us, for having fought every day the good fight of faith with humility, meekness and mercy. Always and only in the name of Christ, without ever abandoning faith and justice, even in the imminence of the risk of death.”